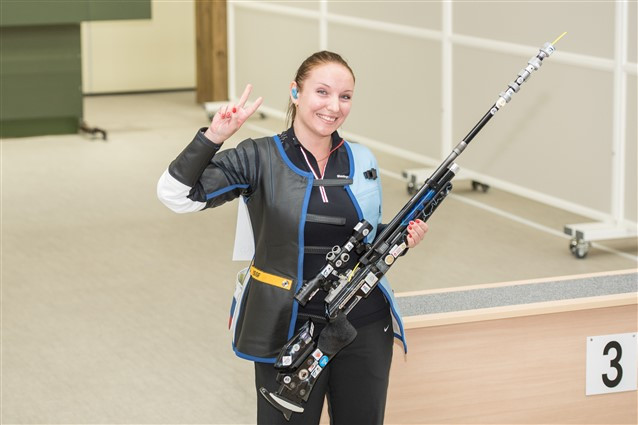 Stepanova won her first global title in seven attempts after a fine performance.

The Ukrainian fired four consecutive shots in the ten ring to secure a 6-3 victory and a World Championship medal.

In the team event, China took gold with a world record score of 1,673 points, closely followed by North Korea in silver with 1,672 points.

The women’s junior event was contested as a Grand Prix as it did not reach the maximum number of participants.

Nyberg was second at the 2018 European Championships in Győr, Hungary, but the 24-year-old shooter turned silver to gold at the World Championships.

The Swede won five of the last six shots against Stepanov for a 6-3 victory.

Stepanov won silver and was joined on the podium by team-mate Vladislav Prianishnikov.

In the team event, Russia took gold with 1,734 points, followed by North Korea in silver medal position with 1,722 points and Sweden in bronze with 1,718.

The 16-year-old Ukrainian shooter took the first point of the match but Grossheim won the next five shots.

Danilenko responded with four winning shots of his own to tie the scores at 5-5.

The 19-year-old German shooter regained his composure and fired two consecutive shots in the ten ring to secure the gold.

Danilenko's silver is his second silver medal of the Championships.

There were no team medals awarded as the minimum number of nationalities competing was not met.

Gold would have gone to Ukraine with Russia in silver.