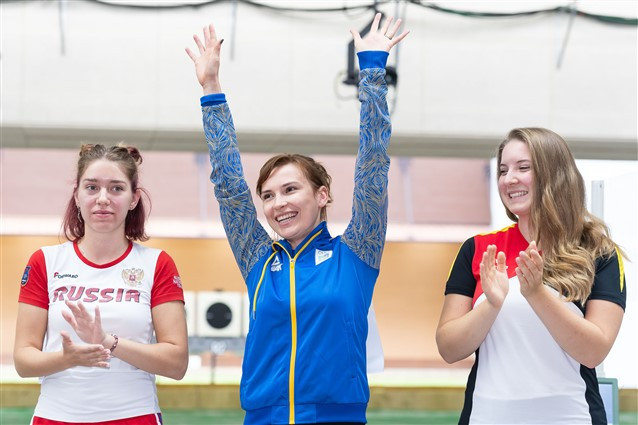 The Ukrainian 33-year-old came through after three shoot-offs at the Changwon International Shooting Centre after a fascinating battle with Russia's Vitalina Batsarashkina.

It was the Russian who led for most of the contest, but Kostevych drew level with her on 35 hits at the second to last series.

Both shooters bagged two hits at the final series to force the shoot-off as they ended equal on 37.

In the first shoot-off phase, both athletes managed four hits and each repeated the feat in the second.

The deadlock was finally broken in the third as Kostevych scored four to Batsarashkina's three.

"I am extremely happy, this has been an epic final." Kostevych, who won in the 10m air pistol at both Athens 2004 and the 2002 World Championships in Lahti, said.

"I want to dedicate this title to my husband and my daughter.

"I have secured an Olympic quota for Tokyo, but this doesn't mean it's time to relax.

"I will continue training for the next competitions."

Chinese Taipei's Chia Chen Tien was the best of the rest with 26 hits as all of the top four achieved a Tokyo 2020 Olympic quota spot.

The 24-year-old dead-eye scored 461.1 points to win at her first World Championship.

Seonaid Mcintosh of Great Britain was fourth on 435.00 to earn the final Tokyo quota place.