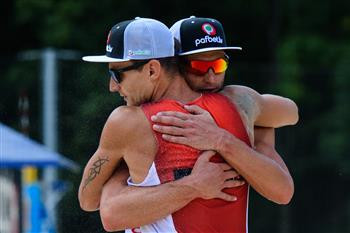 Latvia's Martins Plavins and Edgars Tocs, seeded 17th in the Beach Volleyball Major Series event in Vienna, produced the result of a rain-affected programme today as they defeated top seeds Phil Dalhausser and Nick Lucena of the United States.

Only four of the eight men's pools were decided due to a heavy afternoon rainstorm that delayed this International Volleyball Federation (FIVB) competition in the Austrian capital.

The Latvian pair, who had earlier beaten Ondrej Perusic and David Schweiner of the Czech Republic 17-21, 21-19, 17-15, took 44 minutes to defeat the American pair - although their Pool A game was halted for 108 minutes by the downpour before play resumed.

"We lost our focus a little bit in the second set and they were a little more aggressive on serving, but we got back together and managed to win."

With the win, Plavins and Tocs earned a first-round bye and will return to action on Saturday (August 4) along with today's other group winners - fifth-seeded Alexander Brouwer and Robert Meeuwsen of The Netherlands from Pool E, 13th-seeded qualifiers Taylor Crabb and Jake Gibb of the US, from Pool D, and Russia's 18th-seeded Viacheslav Krasilnikov and Nikita Liamin from Pool B.

Due to the postponement of the final eight men's matches today, tomorrow's schedule will start with the completion of the contests in Pools C, F, G and H followed by round two of women's elimination.

Also scheduled for tomorrow is the first-round of elimination for the men along with the women's quarter-finals.

The men conclude their competition on Sunday (August 5) with the "final four" matches.

Meanwhile in the women’s event three elimination wins by pairs from the United States highlighted the day’s action.

With two other American teams earning byes on Wednesday into the second round of elimination by winning their pools, the US pairs of sixth-seeded Alix Klineman and April Ross, 14th-seeded Sara Hughes and Summer Ross and 17th-seeded qualifiers Kelley Larsen and Emily Stockman knocked out pairs from Finland, the Czech Republic and Switzerland to advance to tomorrow’s schedule.

With two rounds of elimination due for the women to set the line-up for Saturday’s final four matches, two of the opening contests will feature all-American clashes with the third confrontation being against a veteran duo from Italy.

Hughes and Summer Ross will challenge 31st-seeded Marta Menegatti and Viktoria Orsi Toth as the Italians entered this week’s event with a gold medal victory this past Sunday in Agadir, Morocco in their first competition together since the 2016 season.

The two all-American clashes will pit 13th-seeded and pool winners Kelly Claes and Brittany Hochevar against Larsen and Stockman and Klineman and Ross will meet 29th-seeded qualifiers and pool winners Lauren Fendrick and Sarah Sponcil.

With heavy rain halting play, the final women’s match was delayed for more with two hours with 11th-seeded Victoria Bieneck and Isabel Schneider of Germany advancing with a win over 25th seeded qualifiers Tina Graudina and Anastasija Kravcenoka of Latvia.