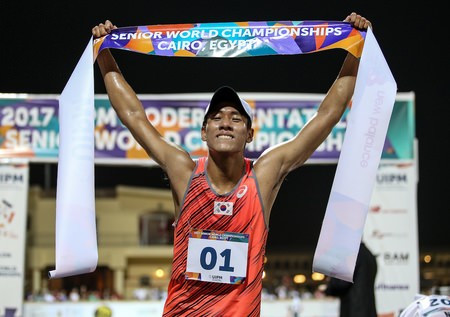 The 28-year-old won the men's title in Egyptian capital Cairo to improve on the bronze medals he won in Rome in 2012 and Moscow last year.

He led from the front after Russia's Rio 2016 Olympic champion Alexander Lesun withdrew through injury to leave the field wide open.

Jung ended on 1,400 points with Hungary's Robert Kasza celebrating the birth of his son this week with silver on 1,393.

The South Korean recorded 25 fencing victories and was third best in the pool, clocking 2min 1.89sec.

That gave him the lead and a composed riding performance - finishing eighth - strengthened his hand.

France's defending champion exited at this stage after four refusals led to his elimination.

Jung enjoyed a nine second lead at the start of the run-shoot and it proved enough as he shot accurately.

"I was thinking of my coaches, my fellow athletes and my country at the end of the race," said Jung.

"During the day I focused on each event and tried not to overdo it.

"I am proud of this win and I hope it will help to make modern pentathlon more popular in Korea and around the world."

The women's final is tomorrow.