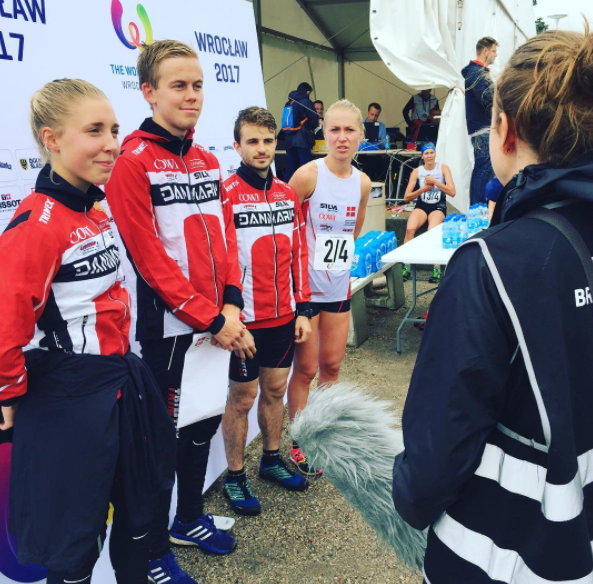 The team of Alm, winner of the individual sprint gold medal on Tuesday (July 25), Soren Bobach, Andreas Hougaard Boesen and Cecilie Friberg Klysner proved too strong for the rest of the field and won in a time of 1 hour 02min 57sec at Wrocław Zoo.

Alm ran the final leg for the Danes and started 31 seconds behind Switzerland's Sabine Hauswirth.

She was closing the gap throughout the first part of the course and a mistake by Hauswirth at control 10 allowed the Dane to take the lead.

Alm’s speed and accuracy was unrivalled and she went on to seal the title for her country.

"I know that the only way to do it [to win] is to keep focusing on myself," Alm said.

"I can’t just run them in by speed – I need to do it with good orienteering technique.

"It’s always good to do it together with the team.

Four medals were also awarded this afternoon in water skiing.

Belarus' Natallia Berdnikava won a second gold medal of the Games in the women's jump final.

The 34-year-old, winner of the trick title yesterday, scored 48.8 points to finish top of the standings.

Rodrigo Miranda of Chile finished in second place on 62.8 points bronze went to Aliaksandr Isayeu of Belarus, who posted a 62.4.

The United States sealed a one-two in the women's wakeboard freestyle final.

Nicola Butler topped the podium on 66.78 points with compatriot Erika Lang following her with 65.44.

A score of 55.22 points was good enough to seal the bronze medal for Italian Alice Virag.

The men's equivalent was won by Japan's Shota Tezuka after he scored 87.89 points.