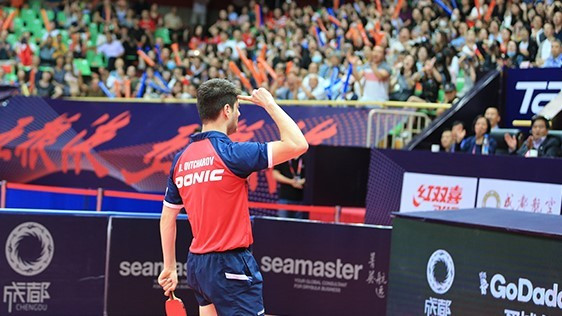 Dimitrij Ovtcharov became Germany’s first winner of the International Table Tennis Federation (ITTF) China Open title in 11 years after beating the last and only other player to achieve the feat, Timo Boll, in the final in Chengdu.

"In the seventh game, I was leading 5-2 at the start, lost a few easy balls and my whole game broke apart,” Ovtcharov said.

"Timo took over and played really smart with placement.

"At 6-10, I didn’t believe I could win anymore, but after the relaxation of that feeling, I won six straight points to win this gold.

"I think luck was on my side today for this victory."

The draw was blown wide open on Friday (June 23) after reigning Olympic and world champion Ma Long and fellow home favourites Fan Zhendong and Xu Xin were all eliminated from the event having mysteriously failed to arrive for their second-round matches.

Ma was due to play Japan’s Yuya Oshima, while Fan and Xu were scheduled to go up against Kim Dongyhun of South Korea and Japan’s Tomokazu Harimoto respectively.

Their opponents were awarded walkover wins.

The ITTF noted on their website that the crowd on Friday (June 23) were consistently shouting the name of Liu Guoliang, who until recently was the head coach of the Chinese national team and has been named vice-president of the CTTA.

According to a reform plan revealed on Tuesday (June 20), the CTTA removed the positions of "chief coach" and "head coaches" in the Chinese team and intends to create two coaching teams for men's and women's players.

It had been reported that members of the Chinese men’s team and coaches had posted on Weibo words to the effect of "we have no desire to fight…all because we miss you Liu Guoliang!"

"The occurrence of this incident has exposed the severe problem with the management of our team," the Chinese table tennis team's statement reads.

"We are deeply saddened and remorse about this incident.

"We sincerely accept the criticism from all sectors of society, and apologise to all fans and spectators."

The ITTF says it has requested a detailed report from the CTTA and also from its own officials on site outlining in more detail as to why the three players failed to turn up for their round-of-16 matches.

"The ITTF World Tour is one of ITTF’s most prestigious products, with millions of fans, and countless partners following around the globe with anticipation to watch the world’s best players in action," a statement from the world governing body reads.

"For this reason, the ITTF is taking this matter extremely seriously, as this has damaged the image and the integrity of table tennis globally.

"Right now, all potential sanctions are on the table, and the ITTF will continue its investigation before any decisions are made.

"The ITTF will also work closely with its Athletes' Commission to try and get a better understanding as to why this incident happened, and provide education and guidance to the players to ensure such an incident does not happen again in the future."

Defeat ended an incredible run on the ITTF World Tour from 16-year-old Sun, who last week marked her senior debut by winning the Japan Open in Tokyo.

Ding was also part of the women’s doubles title-winning team, partnering Liu to a 9-11, 11-7, 11-4, 12-10 victory over compatriots and defending champions Chen Meng and Zhu Yuling.

The match was a repeat of this year’s World Championships final in German city Dusseldorf, where the outcome was the same.