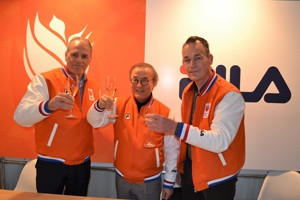 "With Fila, we have a clothing partner who believes in the cooperation that we engage with unions and businesses to grow together TeamNL and providing a sustainable recognisable face in The Netherlands and abroad," Gerard Dielessen, chief executive of the NOC*NSF, said.

Fila chairman Gene Yoon added: "Fila is a company that believes in the power of TeamNL.

"The manner in which The Netherlands organises sport, with a unique base for talent growth that leads to a small country becoming one of the best in the world, enforces global respect."

In December, the NOC*NSF played down funding concerns after four companies ended their sponsorship agreements with the organisation.

Insurance firm Zilveren Kruis stopped sponsoring the body at the end of that month, while employment agency Randstad, a sponsor for 20 years, and accountants group EY confirmed they would be pulling out.

Volkswagen, a partner since 2001, also departed the sponsorship list due to rival car company Toyota becoming a member of The Olympic Partner (TOP) scheme from the start of this year.

Fila, founded in Italy in 1911 but South Korean-owned since 2007, has had a sponsorship agreement with the Royal Dutch Skating Federation since 2014.

The Netherlands won a total of 19 Olympic medals at Rio 2016, including eight golds, seven silvers and four bronzes.