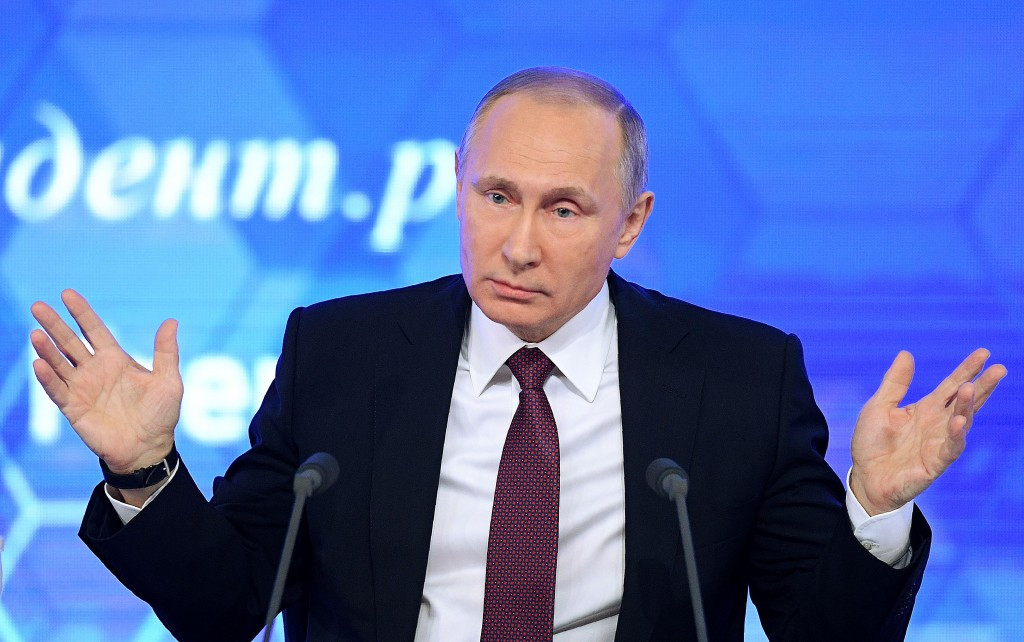 Vladimir Putin has said state-sponsored doping never happened in Russia on the same day the International Olympic Committee (IOC) opened disciplinary proceedings against 28 athletes from the country whose urine samples at Sochi 2014 contained evidence of being tampered with.

The Russian President spoke out today against the findings made by Canadian lawyer Richard McLaren, who conducted the report which found over 1,000 athletes had been involved in a state-sponsored doping scheme in the nation and investigated a total of 95 samples given by Russian competitors at their home Winter Olympics provided to him by the IOC.

McLaren uncovered 28 samples with evidence of manipulation and they will now be re-analysed for Adverse Analytical Findings (AAF).

During his annual news conference, Putin said the country "never had such a system" in place.

"This is simply impossible and we will be doing everything possible to prevent," Putin said.

Putin went onto say Grigory Rodchenkov, who was the World Anti-Doping Agency's (WADA) whistleblower, could have been working on foreign instructions.

"I am confident that the activities of any anti-doping agency, including WADA, should be transparent, clear and verifiable, and we should be aware of the results of its work," he added.

"At this point in time, these 28 new cases are not AAFs, like a positive doping test," the IOC said in a statement.

"However, the manipulation of the samples themselves could lead to an anti-doping rule violation and sanctions."

When asked by Russian news agency TASS to name the 28 athletes involved, the IOC refused to do so.

IOC President Thomas Bach, who admitted in a recent interview with Frankfurter Allgemeine Zeitung that the substantial evidence of a state-sponsored doping programme in Russia made him feel "shock" and "inner rage", said today's decision was an "immediate follow-up" to the McLaren Report.

The report detailed proof of the tampering of samples of 12 medallists from Sochi 2014, while six winners of 21 medals at the Winter Paralympics also had their sample tampered with.

The programme, described by the Canadian as "a cover-up that evolved over the years from uncontrolled chaos to an institutionalised and disciplined medal-winning strategy and conspiracy", was in operation between 2011 and 2015.

It included the London 2012 and Sochi 2014 Olympic Games and involved more than 30 sports.

Following the publication of the report in London on December 9, the IOC confirmed it had extended the mandate of of one of the Commissions looking into allegations of manipulation at Sochi 2014 to include all samples given by Russian athletes at the 2012 Olympics.

The group being led by Swiss IOC member Denis Oswald was granted a bigger remit after McLaren uncovered “immutable” proof of state-sponsored doping.

They also announced in the wake of the findings detailed in the 151-page document, the 63 blood samples collected from Russians at their home Winter Olympics in Sochi have already been re-analysed and all came back negative.

Another IOC Commission, chaired by Samuel Schmid, the former President of the Swiss Confederation and a member of the IOC Ethics Commission, is addressing the “institutional conspiracy across summer and winter sports athletes who participated with Russian officials within the Ministry of Sport and its infrastructure, such as RUSADA, CSP and the Moscow Laboratory along with the FSB”.

Both IOC investigations are set to consult with today’s findings, but will also aim to work with a domestic inquiry set established in Russia, chaired by IOC honorary member Vitaly Smirnov.

"This is the immediate follow-up to Professor McLaren’s Report," Bach said.

A total of 27 Russians have already been sanctioned by the IOC as part of their re-analysis of samples from Beijing 2008 and London 2012.

The International Bobsleigh and Skeleton Federation (IBSF) stripped the 2017 World Championships from Sochi as a result of the report's findings - a decision which was applauded by IOC Athletes' Commission chair Angela Ruggiero and was supported by the IOC.

Königssee in Germany stepped in to host the event earlier this week.

Russia also withdrew from holding the 2017 International Biathlon Union (IBU) World Junior Championships and a World Cup event in the wake of the damning report.

The decisions were supposedly made by the Russian Biathlon Union (RBU) before being announced by the IBU after the governing body held an emergency Executive Board meeting.

The International Skating Union (ISU) confirmed yesterday that they would move the World Cup Speed Skating event in March from Chelyabinsk.

"The findings in the McLaren Report have seriously damaged the integrity of sport and we are determined to ensure the necessary measures are undertaken to punish the offences." said FIS President Gian Franco Kasper

The ISU also released a statement saying they are "evaluating" the proceedings and evidence being provided.

"Mindful of a due diligence process, the ISU is proceeding with the evaluation of the evidence and related necessary investigations," a spokesperson said.