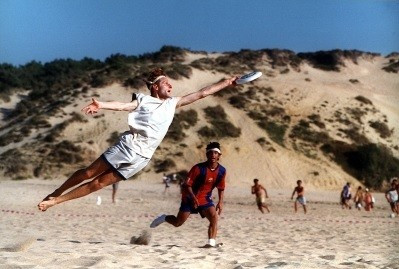 A number of Member Associations are set to miss out on competing at the 2017 World Flying Disc Federation (WFDF) World Championships of Beach Ultimate, after the sport's governing body received too many applications from teams wishing to take part in the event.

WFDF President Robert Rauch claimed 200 entries for the competition, due to be held in Royan in France from June 18 to 24, had been submitted.

As a result, team sizes and registrations have been restricted for the event, according to the WFDF, with 15 players in each side and one non-playing member allowed per team.

Rauch revealed as many as 33 Member Associations would be affected, with some teams not being able to attend.

The competition in Royan will still feature 120 teams, almost double the 65 who participated at the 2015 World Championships of Beach Ultimate.

The Organising Committee and the WFDF had anticipated bids from 75 to 80 teams for 2017, with the worldwide governing body admitting the demand for the event was "unprecedented and unexpected".

Rauch said the decision was "regrettable" but the WFDF praised the Organising Committee for "increasing their hosting ability quite substantially" while conceding it was "nowhere near enough to meet the full demand".

Patrick Van der Bulk, the head of the WFDF’s independent event management, admitted he feels "horrible" about the issue but vowed to ensure a similar situation does not reoccur in the future.

"In the end it was simply not possible," he said.

"We fell victim to our own success.

"I truly feel horrible for all the players and teams affected.

"This is the first time we faced this situation and hopefully it will be the last time.

"WFDF will look at the possibility to split out the masters’ divisions for future Beach Ultimate events, opening up the ability for maximum participation across all divisions."

In a statement, the WFDF responded to claims they had waited too long to communicate the news, insisting they "acted immediately upon receiving the late surge of expressions of interest coming in just before the deadline".

"It has taken some time to work with the Organising Committee to investigate all possible avenues to enable more teams and players to participate," the statement added.