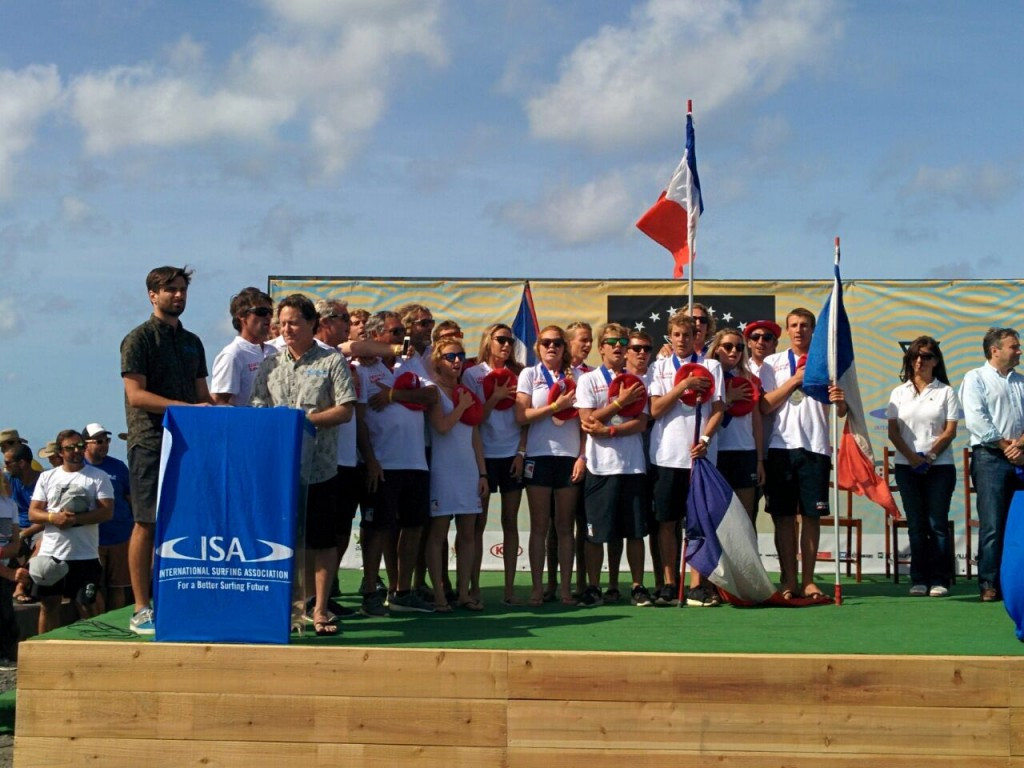 France won the first team gold medal in the Olympic surfing era on the final day of action at the 2016 World Junior Championships in the Azores.

The team gold medal is the first for France in the history of the International Surfing Association (ISA) event.

France overtook Australia in the overall team rankings yesterday, and did not relinquish the advantage today, finishing on 6,725 points with the efforts of all of their surfers across the categories considered.

Australia finished on 6,595 and claimed the silver medal, with Hawaii claiming bronze with a total of 5,925.

Japan racked up 5,468 points which was enough to claim copper medals, awarded in surfing to fourth-placed finishers.

This was their first team medal in the history of the ISA and a promising preview of their drive to improve on the road to Olympic surfing at Tokyo 2020 after the sport was added to the programme for the Games along with baseball and softball, karate, skateboarding and sport climbing.

The first individual gold medal of the day was won by the United States' Caroline Marks who eased to victory in the girls' under-16 final.

Marks produced a stunning display to earn a total of 14.50 points, almost seven ahead of her nearest rival.

Australia's India Robinson took the silver with a score of 7.93 points, while a total of 5.17 was enough to secure bronze for Elin Tawharu of New Zealand.

Ellie Turner of Great Britain was awarded the copper medal as she finished fourth with 2.44.

"It feels amazing to win the first gold medal of the event," said Marks.

"This is my first ISA World Championship, so this win is really special to me.

"My team-mates helped me a ton.

"I worked really hard to get here and moving forward it is definitely a goal of mine to compete with all the world’s top female surfers."

In the older category in the girls' competitions, Hawaii's Brisa Hennessy convincingly won her under-18's final.

Hennessy scored a total of 11.33 points to dominate the rest of the field and win gold for the surfing-mad American state, which competed separately to the rest of the US.

The silver medal was won by Vahine Fierro of Tahiti, who finished on 8.26 points, with Costa Rica's Leilani McGonagle narrowly missing out on second and having to settle for bronze on 7.97.

The copper medal was awarded to France's Juliette Brice with a score of 4.60.

In the boys' under-18 final Brazil's Wesley Dantas won the gold medal with a narrow victory.

Dantas finished with a total score of 13.34 points, with Peru's Alonso Correa taking silver, finishing narrowly behind the Brazilian on 13.00.

The bronze was won by Frenchman Colin Doyez with a score of 8.40 points, while Harley Ross of Australia took the copper medal with a total of 7.74.

France's Thomas Debierre made light work of the competition in the boys' under-16 final as he eased to a comfortable victory by five points.

Debierre took the gold medal with a score of 12.5 points, whilst Australia's Kyuss King claimed silver with a total of 7.87.

The final's Japanese duo were left with bronze and copper as Yuji Mori finished third on 7.53 points and his compatriot, Yuji Nishi, came in fourth with a score of 2.83.

"These surfers will forever be the very first ISA junior gold medallists in the Olympic surfing era.

"All the competitors surfed in true Olympic spirit throughout the week and showed amazing team camaraderie as they represented their countries."