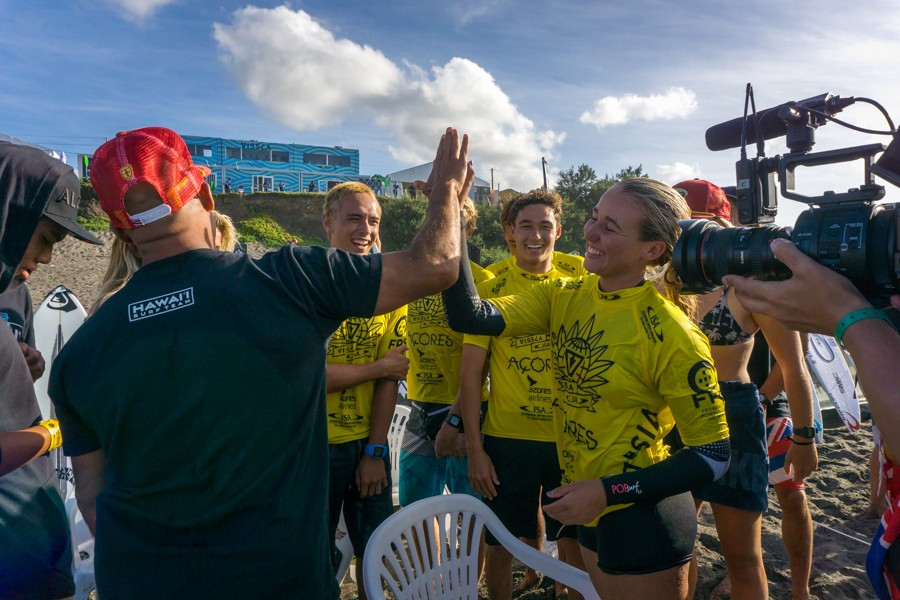 Hawaii won the International Surfing Association (ISA) Aloha Cup on the penultimate day of action at the 2016 World Junior Surfing Championships in the Azores.

The Hawaiian team, competing separately to the rest of the United States, won the four-team final today, beating France, Costa Rica and Japan with a score of 46.02 points.

The top eight teams from the 2015 competition fielded a team of five surfers, with each competitor catching two waves in the hour long heat and their individual scores adding up to a collective team total.

France surged into the lead in the international individual competition, putting themselves in position to make history and win their first-ever team gold medal.

Having trailed the Australians for the past few days, France finally took the lead today as five of their competitors remain in contention in tomorrow's final day of competition.

Colin Doyez made it through to the boys under-18's semi finals whilst both Thomas Debierre and Marco Mignot both secured their places in the last eight of the under-16's competition.

Nina Reynal helped France’s push for the team gold medal by posting the highest heat total of the round with 11.36 points in the girls under 18's event and Reynal’s teammate, Juliette Brice, also joined her in the semi-finals.

The under-16 and under-18 boys got Saturday's action underway in sunny weather and light wind.

The under-18 quarter finals were the first action on the waves, with Brazil’s Wesley Dantas continuing to stand out, achieving the highest heat score of the round with 13.77 points.

Hawaiian duo Kaulana Apo and Cody Young were paired in the same quarter-final heat and strategically used priority and positioning to help each other advance.

The boys under-16's quarter-finals featured a strong showing from Japan.

In the first heat, Yuji Mori surfed to the round’s highest heat score of 13.17 and advanced to the semi-final where he will compete against his team-mate Yuji Nishi.

America's Eithan Osborne and Australia’s Kyuss King also successfully made it through.

"As the last boy remaining on Team USA in the competition, there is a ton of energy from my team supporting me," said Osborne.

"I feel strong and confident that I can do well.

"This is my first ISA event and thus far the experience has been amazing.

"We are in a beautiful place and the vibe is awesome."

Rounding off the day's individual competition was the girls' under-16 and under-18 quarter-finals which ran in ideal conditions with a fresh swell.

American Caroline Marks followed up her fantastic performance yesterday and took first place in her under-16's quarter-final heat, scoring a 12.06 that was the highest of the round.

Marks went through to the semi-finals along with Great Britain’s Ellie Turner.

"I would like to give a big congratulation to Team Hawaii for winning the first ISA Aloha Cup gold medal in the Olympic surfing era,"said ISA President Fernando Aguerre.

"They showed impeccable team-work and camaraderie during their historic performance.

"Tomorrow is the day that we have all been waiting for, as we will award gold medals to the individual champions and overall team champion.

"The world’s best junior surfers will rise and define themselves as potential future Olympians in the Tokyo 2020 Games."