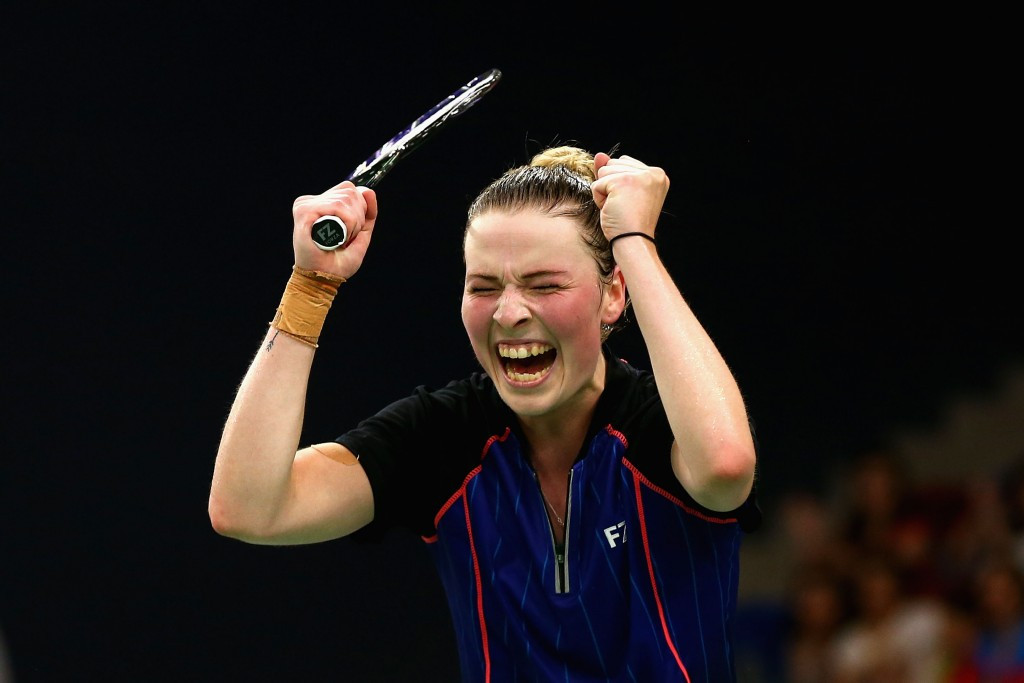 Danish gold in the European Games badminton event grew to three here today as Line Kjaersfeldt, the self-styled “queen” of the sport in her country, produced a suitably regal performance to claim the women’s singles title, shortly before Sara Thygesen and Niclas Nohr earned the mixed doubles gold to add to the one won in the previous night’s men’s doubles.

Add to that the silver contributed by Emil Holst - who criticised officials for changing the speed of the shuttles  - after he was beaten 21-12, 23-21 by Spain’s Pablo Abian in today’s men’s singles final, and the bronze won in yesterday’s women’s doubles, and it makes a pretty impressive statement in European terms for the Danes.

So bring on the Asians….

The 21-year-old Kjaersfeldt, who has filled the gap left in the European women’s game by the retirement of Tine Rasmussen, looks capable of making an impact at the Rio 2016 Olympics given the way she recovered from an uncertain start against Belgium’s unseeded Lianne Tan.

Her smaller opponent - who is only 5ft 3in -  took the first game 21-18 before she began to take an inexorable grip on the match, winning the next two games 21-19, 21-9 in front of a packed and appreciative crowd.

"When I was behind in the second set, I told myself, 'I'm not going to lose',” said Kjaersfeldt.

By the end Tan, who was loudly supported by Belgian team members throughout, looked as if she was accepting of her fate as the Danish girl’s superior power began to tell.

Thygesen and Nohr were always in control of their final against France’s Audrey Fontaine and Gaetan Mittelheisser, winning 21-16, 21-16.

Holst was outmanoeuvred in his final against the 30-year-old Spaniard who has plenty of big time experience having been ranked No.1 in Europe as recently as 2011.

Abian nevertheless had to deploy all his guile to prevent the tall and powerful 21-year-old from making consistent use of his crushing forehand shot.

As Holst netted on the second championship point, Abian sank to his knees, before rising and pointing to the name emblazoned on the back of his shirt with two downward-pointing thumbs as he produced his first grin of the afternoon - although there had been plenty of negative emotions swirling around throughout the match…

Holst insisted he had been playing at a disadvantage as he had not known beforehand that a different speed shuttle had been introduced for the final.

"I think I should have won,” he said.

“That changed things a lot in the first set, and caused me to make some easy mistakes.

"I think that's very, very bad from the organisers.

"Midway through I asked the service umpire, and he looked and could see that it was speed three.

"I didn't know they had been changed. I shot a lot of shuttles out and he got too many easy points, and it [the change of shuttle speed] made me out of control.

It has a big effect in a game if you don't have control.

"I don't know if Abian knew.

"Sometimes the players are testing the shuttles before the start, and maybe he did."

Thygesen, meanwhile, had some advice for the organisers of the next European Games: "I think they need to see what they want to get out of this tournament.

“If they really want to show what badminton is in Europe, then they need world ranking points.

“But it's been good that some of the lesser players can step forward, and some of the other nations."