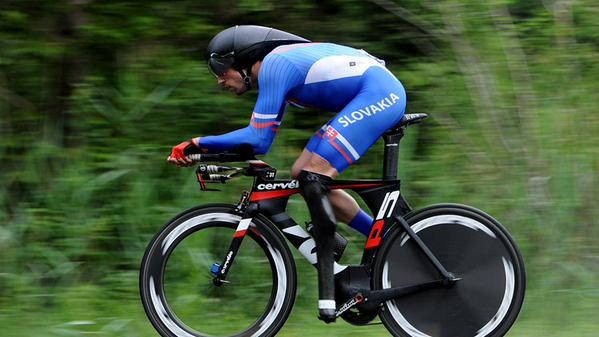 France’s Quentin Aubague, winner of won both time trial and road race gold in the T1 category at the first World Cup of the season in Maniago, Italy, secured a comprehensive win in his time trial event.

Aubague posted a time of 26min 45.74sec to finish two minutes clear of the Czech Republic’s Jiri Hindr, while Russia’s Sergey Semochkin was a further minute-and-a-half in arrears to the Frenchman.

His performance was replicated by Slovakia’s Jozef Metelka in the C4 event as he added his fourth win of the fledging season by posting a winning time of 35:39, while Germany’s Thomas Schafer time of 36:54 was enough to edge out Spain’s Cesar Neira Perez by two seconds.

Teuber sealed C1 time trial in 19:39 while Polvi was forced to settle for H1 bronze after being finishing behind Czech Republic’s Patrik Jahoda and South Africa’s Nicolas Pieter Du Preez, with the winner recording a time of 30:24.

The women’s events saw more repeat winners as Poland’s Anna Harkowska continued her domination of the women’s C5 division by setting a time of 19:22, which could not be matched by Canada’s Nicole Clermont, who earned silver in 20:50, while 21:19 prove good enough for bronze for Germany’s Kerstin Brachtendorf.

American duo Shawn Morelli and Megan Fisher earn gold and silver medal positions in the women’s C4 event, with Morelli’s time of 20:46 faster than her teammate by seven seconds, and Canada’s Marie-Claude Molnar completed the podium in 21:32.

Vincent Ter Schure and pilot Timo Fransen of The Netherlands successful won the tandem time trial event as their time of 32:26 proved too strong for their nearest challengers Aaron Scheidies and Colin Riley.

Polish athletes occupied the gold and silver medal positions in the H4 hand cycling class as  Rafal Wilk finished 10.99 seconds ahead of teammate Krystian Giera to take victory in 19:37, with Germany’s Bernd Jeffre ending as the bronze medallist with his time of 19:50.