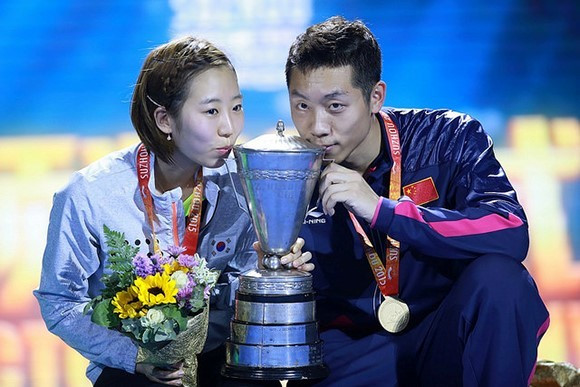 Despite it being their first ever partnership, the dynamic pair managed to defeat Japan's Kasumi Ishikawa and Maharu Yoshimura 11-7, 11-8, 11-4, 11-6 to claim the title.

"This victory is a result of the combined efforts by me and my partner, her performance has been very stable since our first match here in Suzhou, and she has improved a lot to help us win against the Japanese in the finals," said the world number two, Xu.

Delight soon turned into despair though for Xu as he suffered a shock defeat to compatriot Fang Bo in the fourth round of the men's singles.

Despite being ranked 11 places below his opponent in the seedings, Fang claimed victory by the minimal two-point margin in the seventh game to book his place in the quarter-finals.

Trailing 4-1 in the seventh game, Xu had to have his shoulder strapped after calling for a medical time out, before bravely returning to the fray to restore parity at 8-8.

“He is my colleague and yes he had an injury but that is sport, you win you lose”, said Fang, a former world junior champion.

“In the seventh game I must give great credit to Xu Xin for the way he fought to save the match points.”

“I had to change, not play so fast; if I played fast I had no chance.”

Fan won the men’s singles gold medal at the Youth Olympic Games in Nanjing last year, four years after Koki had achieved the feat in Singapore.

“Overall, looking back at the whole tournament, I have to be pleased”, said Li.

“You think you are doing well but then you meet somebody like Zhu Yuling and it brings you down to earth.”

It was the second time this year that Li had played Zhu following their meeting in the second round of the ITTF World Tour Kuwait Open in February, when Zhu won in six games.

There was also success for Zhu’s compatriots, number two seed Liu Shiwen and Mu Zi, who began her journey in the qualification stage.