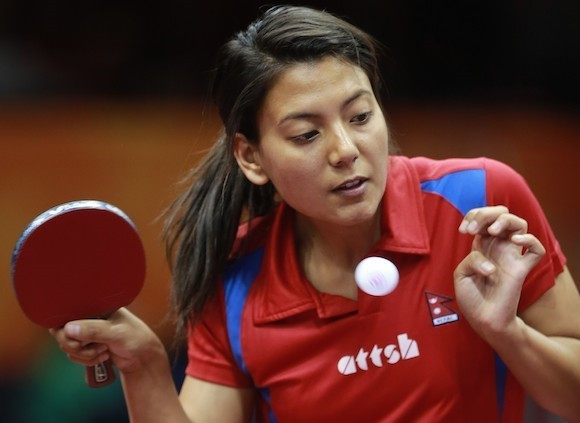 The International Table Tennis Federation (ITTF) has sent its condolences to those hit by the earthquake that struck Nepal yesterday.

The magnitude 7.8 tremor is now reported to have killed some 2,500 people after striking in a central area of the country between Kathmandu and the city of Pokhara yesterday, on the eve of the World Table Tennis Championships which started in Suzhou today.

The ITTF said it has been difficult for the Nepalese team competing in the Chinese city as they desperately awaited news from back home.

Thomas Weikert, President of world table tennis’ governing body, met with the nation’s team members after they played their first match of the day.

"It's really a tragic situation, I spoke with the Nepalese girls competing here today to send my condolences,” he said.

“I saw the pictures on television, and it was really devastating.

"Of course the ITTF family have our hearts with the Nepalese table tennis players, and the whole nation as well.

“We will look into this, and see how ITTF can help them.

“Nepal is not a very rich country, and does not have much equipment and resources, we will definitely see how we can support them."

"It's hard to play, I just pray that everyone is safe,” she said.

“Some people I know are hurt, and some friends are dead.

Shrestha added: "It affected me, of course, because now there are 72 hours of critical condition.

“There could be another earthquake strike at any time and my parents and my family are staying (outside in a tent), so it is quite difficult.

“My old house got destructed, but thank God nobody was sitting around there."

Vladimir Samsonov, chair of the ITTF Athletes' Commission, sent out a message of solidarity to those in Nepal on behalf of the world table tennis family.

"I heard that one of the Nepalese team members back home lost some of his family members to the disaster, and we understand how devastating this whole situation is to him, the team and their country,” he said.

“On behalf of all the players competing here in Suzhou, and table tennis players all around the world, I would like to show our support and send them our condolences."