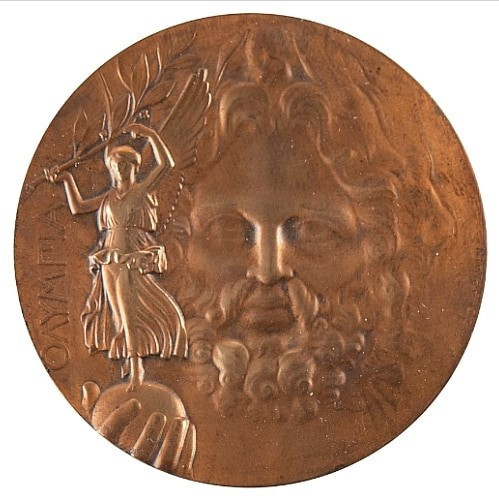 A rare second-place Olympic medal from the first modern Games at Athens in 1896, complete with its box, is one of the choice items in a huge lot of Olympic memorabilia being put up for sale by RR Auction  with the deadline falling on Thursday (January 19).

Only the first and second-place winners received medals in the first Olympics of the modern era, with the silver going to the victors and bronze to the runners-up.

The description of the medal reads:“The front depicts a relief portrait of Zeus holding Nike, the goddess of Victory, in the palm of his hand, with text along left side, ‘Olympia’;

“the reverse bears a detailed view of the Acropolis of Athens topped by the Parthenon, with raised Greek characters to upper and lower portion (translated), ‘International Olympic Games in Athens, 1896.’

“Stamped ‘Bronze’ on the edge, complete with its original case lined in deep red velvet.”

Other remarkable lots include no. 6117, the actual competition swim trunks worn by then-16-year-old Greg Louganis of the United States in Montreal in 1976 on his way to the 10 m platform diving silver medal.