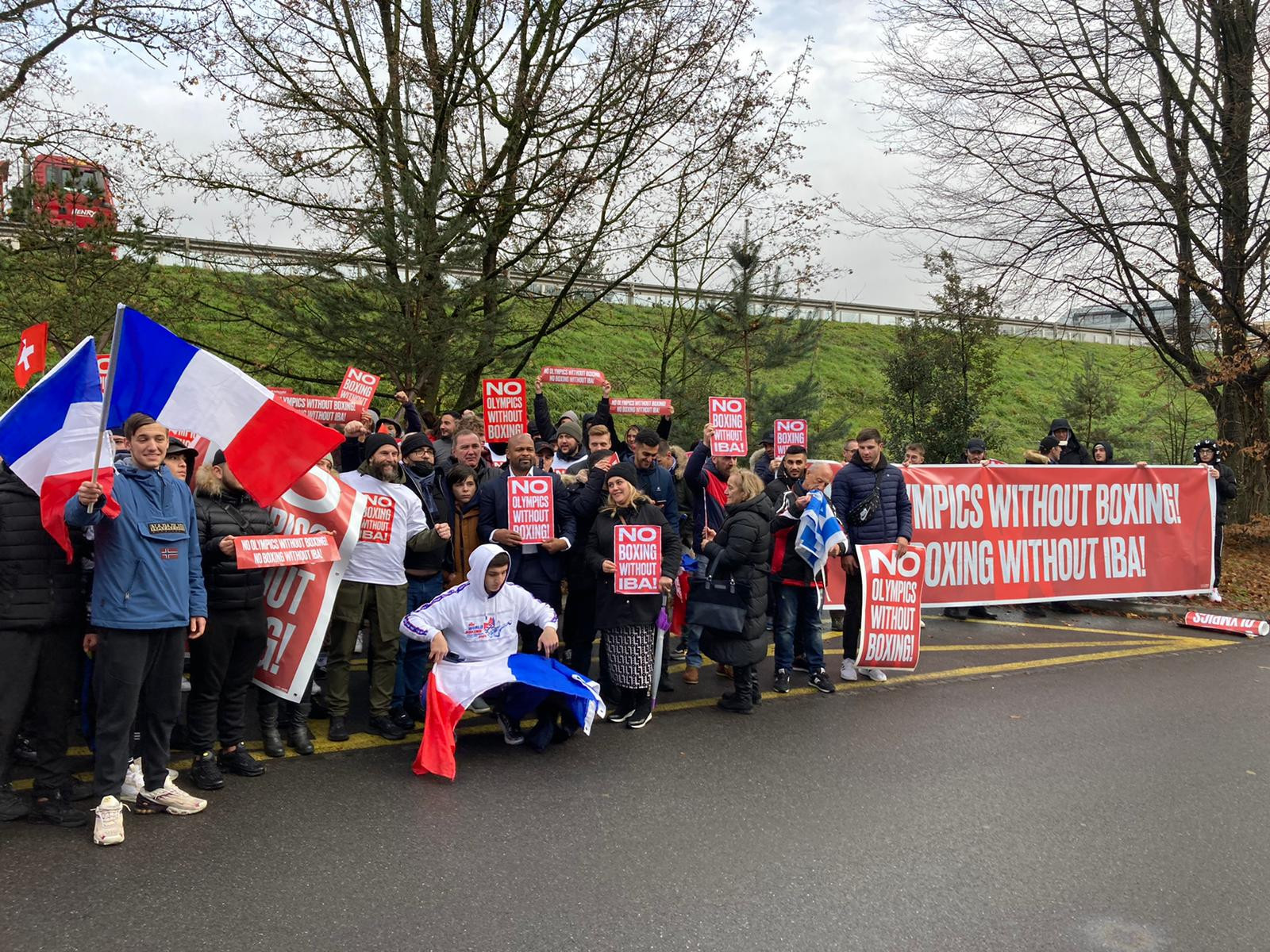 Former world champion Roy Jones Jr has led a group of protestors bearing "no boxing without IBA" and "no Olympics without boxing" tee-shirts and banners to coincide with the start of the International Olympic Committee’s (IOC) Executive Board meeting here today.

Roughly 40 athletes and coaches from countries including Switzerland, France and Poland were initially present, and this swelled to around 80 later in the morning.

Jones Jr, an Olympic silver medallist at Seoul 1988 after losing a highly controversial light middleweight final to South Korea's Park Si-Hun, then arrived in a vehicle with identical branding to that of the protestors’ tee-shirts, and entered Olympic House to discuss boxing’s future at the Games with IOC officials.

He was joined by Gabriele Martelli, an Italian who is head coach of Malta’s Olympic boxing team.

Jones Jr claimed to be representing athletes and Martelli coaches in making the case for boxing’s inclusion at Los Angeles 2028.

The protestors want the IOC to readmit boxing, governed by the International Boxing Association (IBA), to be readmitted for the 2028 Olympic Games in Los Angeles.

The IBA said it "acknowledges and gives its appreciation to the boxers and coaches from six countries who took part in a peaceful demonstration in front of the IOC Headquarters in Lausanne", and commended Jones Jr and other participants for their "brave actions of support [for] athletes, the sport of boxing, and our organization".

IOC spokesperson Mark Adams said that the organisation engaged with the protestors to allow them to raise their concerns.

"There was a demonstration outside by supporters of IBA, and we heard their concerns," he said.

"We had a team went down and I believe they were even invited into the offices and we had a discussion, a very constructive discussion.

"We heard what they had to say."

Adams confirmed that the status of the IBA is expected to form a "large part of the conversation" at the Executive Board meeting, but "we haven’t yet reached any conclusions or anything to report on that" after the first day.

The IBA, then known as AIBA, was stripped of its IOC recognition in June 2019.

Ongoing governance concerns under IBA President Umar Kremlev, who first took office in December 2020, mean boxing faces a battle to save its place at the Olympic Games after Paris 2024.

The IBA has already been stripped of any involvement at the upcoming Games in the French capital.

Its "financial dependency" on Russian state-owned Gazprom and an "increased" role of the Presidential office in Moscow are among the IOC's concerns.

The IOC declared itself "extremely concerned" at an IBA Extraordinary Congress held in Yerevan in September, where Russian official Kremlev retained his position as President after delegates voted against staging a fresh election, despite the Court of Arbitration for Sport ruling that Dutch official Boris van der Vorst should not have been prevented from standing in Istanbul in May.

Jones Jr, a close associate of Kremlev and who was awarded a Russian passport by President Vladimir Putin in 2015, told insidethegames that he is "more confident" of boxing’s prospects after his discussions with the IOC.

Reporter Patrick Burke is outside #Olympic House in #Lausanne, where a group of protestors are calling for #boxing’s re-admission to #LosAngeles2028 with the #IBA as its governing body.

The developing story can be read on the link belowhttps://t.co/5HpTDUMUEi pic.twitter.com/9AdCf7PTdC

"It sounds like the IOC really does want to keep boxing as well as the IBA, so I think we will be okay," he said.

He also defended Kremlev's record as IBA President, claiming that he is the "best person for the job right now" and has helped to resolve issues at the governing body.

"He's cleaned it up completely.

"He's tried to do it from a place of helping the athletes more so than anything else, and as long as we keep that intact, I think we will be okay.

"If we stick together and have a neutral opinion and make the best for the athletes, I think we will all be fine.

"The problem was in the past, there was so much other illegal activity going on and so many things that were corrupt that it wasn't working.

"He came in and changed it, so IBA is totally different, not nearly as corrupt at it was.

"It had problems with funding and everything else, he fixed all those problems the AIBA had, and he changed to IBA because he should have.

"He doesn’t deserve to wear that bad reputation, because he didn't do that.

"Now under new rulership, we have been seeing a whole different situation.

"He has been allowing kids a chance and opportunities, who didn't have opportunities before, and that's what boxing should be about."

Martelli welcomed the opportunity to discuss the situation of boxing and the IBA with the IOC.

"I think that the great thing is that they were open to listening to us, and that's why we we're here," he told insidethegames.

"We were here to be heard, to tell them our point of view from the coaches, from the boxers, and to be sure that they were considering in the next decision that they are about to take our position, which is absolutely an elegant position.

"There is no fighting, no one is correct or wrong, it's about boxing, it's about kids that are dreaming to be Olympians representing their own countries, coaches that work to see these dreams happening.

"It's all about the love for the sport that we all practise and love deeply."

He also hopes that he and Jones can provide a means for mediation between the IOC and IBA.

"Me and Roy I think today did a pretty good job," Martelli added.

"We hope that we will have the opportunity to be sort of a bridge to make sure that all the things will be clear so everyone can be happy, because having Federation issues makes everyone feel uncomfortable and we cannot afford boxers feeling uncomfortable in the ring."

Critics including van der Vorst have accused Kremlev of failing to "meet the expectations" after the IOC provided a roadmap for reforms, and have voiced concerns over the integrity of several IBA events.

The IBA Executive Committee's decision in October to allow athletes from Russia and Belarus to compete under their own flags, contradicting IOC recommendations, also courted controversy.

After the IBA Extraordinary Congress, Kremlev hinted at a potential future outside of the Olympics when he insisted "we are going to take our own path".

However, he vowed to battle for the sport's place at Los Angeles 2028, and recently warned "nobody will be silent" if boxing is not reinstated.