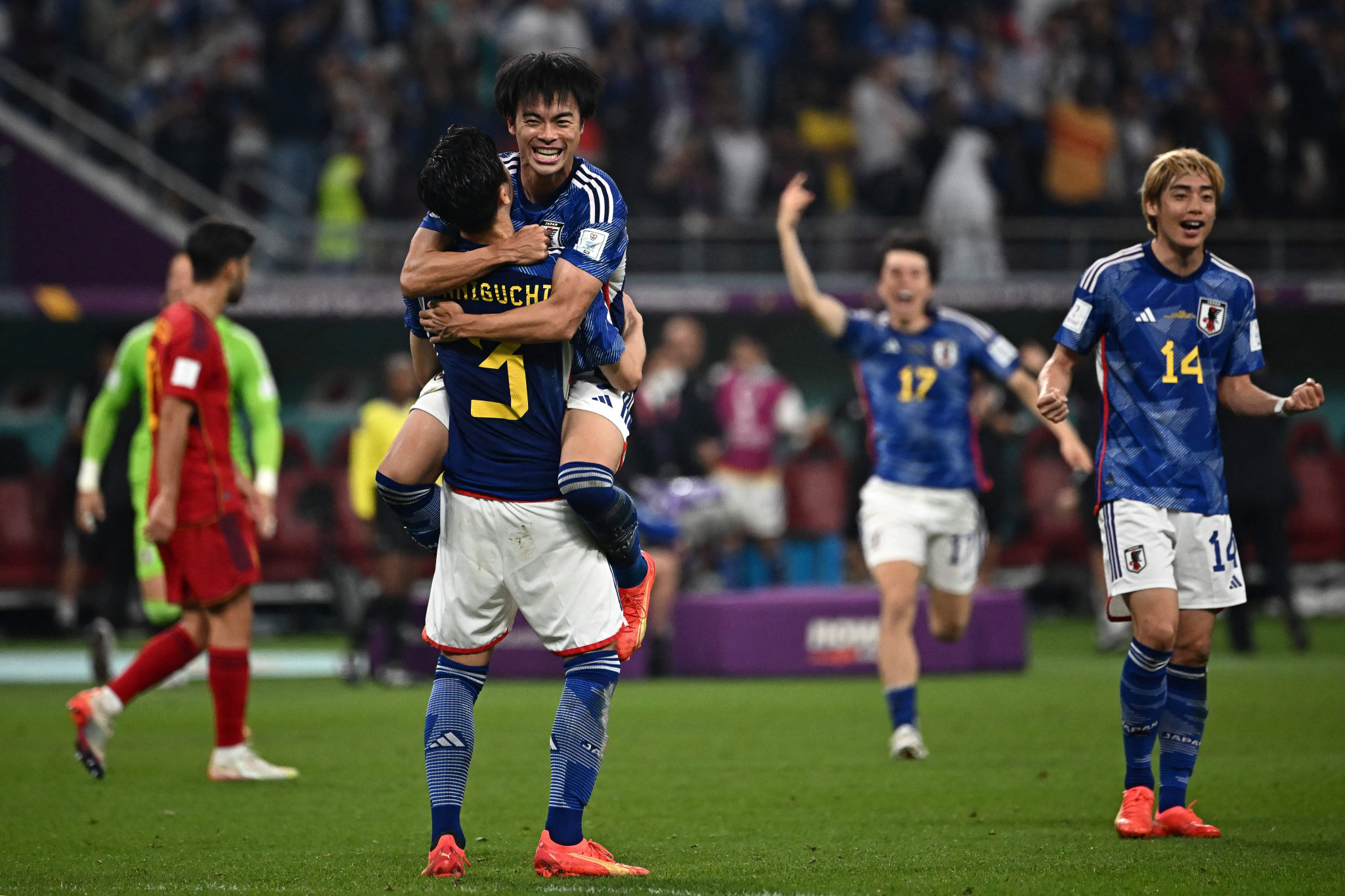 Japan and Morocco were the latest nations to top their groups and progress to the round of 16, as fancied powerhouses Germany and Belgium were eliminated at their expense at the FIFA World Cup in Qatar.

Having defeated Germany in their opener, Japan looked to have squandered their chance to qualify from their tricky group with a loss to Costa Rica, who looked hapless in their 7-0 defeat to Spain.

To progress, they needed at least a draw against 2010 champions Spain at the Khalifa International Stadium in Al Rayyan, but soon found themselves down by a goal from Álvaro Morata inside 11 minutes, heading home a floated cross from César Azpilicueta.

However, much like the match against Germany, Japan came alive in the second-half with a quickfire double.

Ritsu Dōan was on the scoresheet again after scoring the equaliser against Germany - this time with a well-struck rocket shot outside the box, which Spanish goalkeeper Unai Simón failed to parry away.

Dōan's equaliser in the 48th minute was followed up by what would be a controversial winner three minutes later.

The Freiburg midfielder was involved again, putting the ball along the frontline, which was caught on the line by Kaoru Mitoma for a cross back centre, which Ao Tanaka dragged into the net.

Television cameras could not decisively pick up whether Mitoma's cross had fully went over the line, but the video assistant referee reviewed the decision and ruled the goal should stand, with the score eventually finishing 2-1.

Germany had to win to have a chance of progressing and started well with an opener from Serge Gnabry after 10 minutes when he headed in a cross.

In the second-half at the Al Bayt Stadium in Al Khor, a Joel Campbell header was fumbled by German keeper Manuel Neuer, allowing Yeltsin Tejeda to strike home the equaliser.

With Germany hitting the framework a couple of times afterwards, some pinball heading and a scrappy overhead kick from defender Juan Pablo Vargas gave Costa Rica the lead, although this went down as a Neuer own goal.

For three minutes, Japan and Costa Rica were the two teams in the qualification spots, but Germany equalised quickly through Kai Havertz in the 73rd minute, with a second coming from the Chelsea forward 12 minutes later to give them the lead.

At this stage, they needed Spain to score twice and take the lead against Japan to qualify from Group E.

But another twist in the tale came, with Niclas Füllkrug making it 4-2 to Germany.

If Japan had conceded an equaliser to Spain it would see them eliminated, but they held on to lead Spain in the group, as Germany and Costa Rica exited.

They faced underperforming Canada at the Al Thumama Stadium in Doha, who ended their first World Cup since 1986 with no points.

A great ball down the right to Sevilla striker Youssef En-Nesyri after 23 minutes put them 2-0 up as Canada looked sunk.

The North American side got back into the game when Sam Adekugbe's cross came off Moroccan defender Nayef Aguerd, who knocked it into his own net.

Captain Atiba Hutchinson, who is 39, came close to an equaliser for Canada with a header in the second-half from a cross, but only half the ball was over the line, after it bounced down off the crossbar.

The score finished 2-1, meaning Morocco advanced top of the table, making it the second time the nation has qualified for the round of 16 - fittingly the first being in 1986.

Croatia progressed in second place having held a lethargic Belgium to a 0-0 draw at the Ahmad bin Ali Stadium in Al Rayyan.

Both regarded among the oldest starting line-ups in the tournament, the Croatians looked vibrant throughout the first-half, with opportunities from wing-backs Josip Juranović and Ivan Perišić, as well as their midfield greats captain Luka Modrić and Mateo Kovačić.

Fortunes changed in the second-half with the introduction of Belgian striker Romelu Lukaku, who had several opportunities to score - putting their opponents on the back foot.

Yannick Carrasco had a shot saved by Croatian goalkeeper Dominik Livaković from close range, with Lukaku striking the inside of the post in the follow-up, but the ball did not cross the line.

Several chances were squandered, with Lukaku's chest nearly putting a ball over the line in the dying minutes.

Having not scored, it meant Belgium were eliminated, four years after their golden generation came just short of the World Cup final.

Croatia are to play Japan in the last 16, while Morocco have been rewarded with a match against Spain.