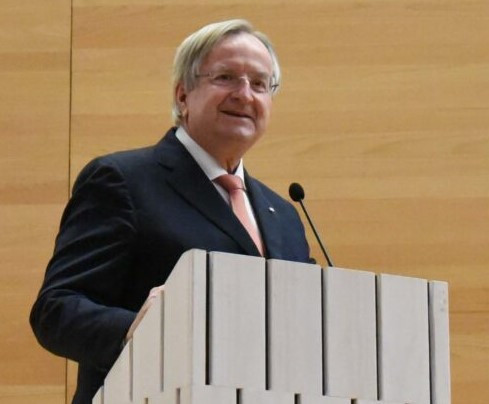 The 18-page letter, obtained by insidethegames, has been issued by Vervaecke to GAISF members on the eve of a vote that could see the organisation get abolished.

An Extraordinary General Assembly is set to be held here tomorrow where the future of GAISF, which has the slogan "One Voice for all Sport", is expected to be decided.

Ferriani, elected as GAISF President in November 2021, has claimed that the dissolution of the organisation is the "most appropriate option", but the move is seen as an attempted power grab by the International Olympic Committee (IOC).

In his letter, addressed to "Dear Custodians of Sport", Vervaecke warned that GAISF is needed "more than ever" to ensure International Federations (IF) have an "autonomous platform" to represent their interests and believes that SportAccord should be dissolved instead.

"The GAISF Members elected a President with the expectations that such a person would increase the importance of the GAISF, not destroy it," Vervaecke wrote in his letter that has been sent to all International Federations.

"At the 2022 General Assembly, Mr Ivo Ferriani stated that there was a will to avoid duplication and therefore SportAccord should remain in place and the GAISF should be dissolved.

"We would have expected the contrary.

GAISF, founded in 1965, has 95 full members and 20 associate member organisations.

Dissolution would require a two-thirds majority of GAISF’s full members, meaning it would take 33 votes to block it in the event of a 100 per cent turnout.

Ferriani is also the head of SportAccord, the Association of International Olympic Winter Sports Federations (AIOWF) and the International Bobsleigh and Skeleton Federation.

He is widely considered to be a close ally of IOC President Thomas Bach.

"How can a group of four people that were supposed to only organise conferences define themselves nowadays to be ‘modern and more efficient’ than GAISF and think they can represent all International Federations?," said Vervaecke.

"If GAISF is dissolved next week, then SportAccord only will consist of ASOIF and AIOWF, thus two people.

"Is this good governance?

"No system has been put in place so far to replace the GAISF.

"We have not seen draft SportAccord statutes, while it was promised that they would be presented.

"All what is promised is not set out on paper.

"How can a GAISF member make an informed decision?"

Vervaecke claimed that the "whole approach is seen as poor governance" and believes the "intent to dissolve the GAISF is anything but transparent".

He also argued that the GAISF is "financial healthy" as it was reported that the organisation’s General Assembly that the body had assets worth CHF5.66 million (£4.9 million/$6 million/€5.74 million).

It is understood that GAISF’s assets will be distributed to ASOIF, AIOWF, Association of IOC Recognised International Sports Federations (ARISF) and the Alliance of Independent Recognised Members of Sport (AIMS).

"The big winners are the ASOIF and AIOWF who will receive together over €3.4 million, while they already receive tons of money from the IOC," said Vervaecke.

"The big losers are the 62 IF’s from ARISF and AIMS.

"Some ARISF or AIMS Members are much, much bigger than some ASOIF or AIOWF Members."

Vervaecke claims that the four leaders of SportAccord, which are either members of ASOIF or AIOWF, have "served their organisations well and neglected others".

"The GAISF members need more than ever to have an autonomous platform like the GAISF to represent their interests," added Vervaecke.

"The GAISF is as relevant as ever and must continue to represent all its members.

"The GAISF must closely work together with the IOC, but also with all other sport organisations. SportAccord is a company, is not relevant and can easily be dissolved.

"I am writing as our collective voice matters: we should keep the GAISF and dissolve SportAccord."