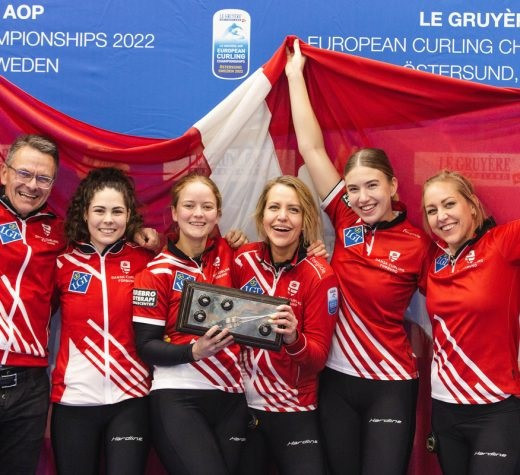 Denmark ended their 28-year wait for a second women's title at the European Curling Championships with a dramatic victory over Switzerland in Östersund.

An extra end was needed to determine the winner as Denmark claimed an 8-4 success at the Östersund Arena in the Swedish city, while Scotland edged Switzerland 5-4 to retain the men's crown.

It was Denmark’s first European gold since 1994 as Madeleine Dupont, Mathilde Halse, Denise Dupont, My Larsen and Jasmin Lander etched their names in Danish history.

The Dupont sisters were in the side when Denmark last reached the final in 2002 and they ensured they did not fall short again.

Switzerland led 3-2 and 4-3 before Denmark forced an extra end when skip Madeleine Dupont got her draw right and nudged into position to score an all-important point.

Alina Paetz was left with a double take-out attempt for victory for Switzerland but her angle was slightly wrong and jammed the target stone, leaving Denmark with a score of four to clinch the title.

"That was unexpected," said Dupont.

"I did not expect her to miss [Paetz’s last shot].

"She’s too good to miss that.

"I don’t know how it feels…I’ve just tried it for a minute.

"It’s going to be a really good feeling for the rest of the year.

"I can’t remember the last time I got a gold medal in anything in curling."

The bronze medal was won by Scotland following a 9-5 triumph against Italy.

Scotland secured the men’s title for the third time in the past four European Curling Championships after overcoming Switzerland.

The Swiss team stole a single point in the ninth end to take the lead for the first time since the second.

With his first shot of the tenth end, Scotland’s Mouat played a raise double take-out to get rid of two Swiss stones sitting in the house.

With his last stone, Mouat played another complicated raise to score two points for the title.

"Having to make two shots in the tenth end like that is pretty special.

"This one means a lot, having to finish off a game like that, amazing."

The bronze medal went to Italy following a 10-7 victory over hosts Sweden.