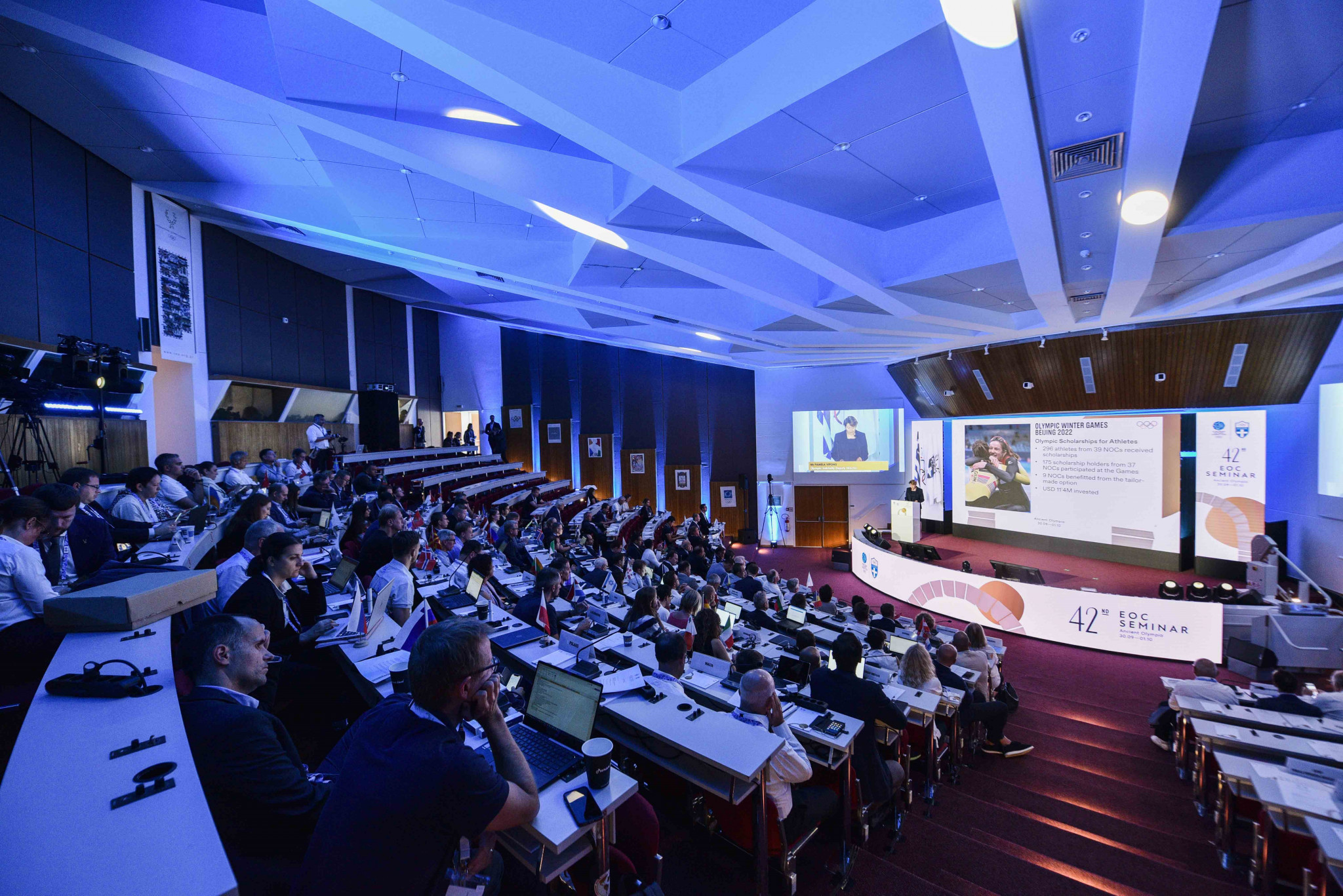 Ukrainian and Nordic officials were silenced by the European Olympic Committees (EOC) when seeking to speak out against the permission of Russian and Belarusian delegates to the organisation’s Seminar here.

Alla Tarasiuk, international relations manager for the National Olympic Committee (NOC) of Ukraine, and Peter Reinebo, chief executive of the Swedish Olympic Committee, both tried to voice their views but were told that they were not allowed after EOC President Spyros Capralos stressed in his opening remarks that "any political statement" would be "strictly prohibited" at the meeting in Antient Olympia.

The NOCs of Russia and Belarus had been invited to attend the hybrid gathering online, despite being previously barred from attending the EOC General Assembly in June.

After EOC secretary general Raffaele Pagnozzi opened the floor to questions at the International Olympic Academy, Reinebo, speaking on behalf of the Nordic NOCs, slammed the decision to permit Russian and Belarusian officials.

"We think the possibility of them participating in this seminar is the wrong decision," said Reinebo.

The statement set out the concerns of the NOCs of Sweden, Denmark, Finland, Iceland, Norway, Sweden, Greenland, Faroe Islands and Aland over the possibility of Russian and Belarusian athletes and officials returning to international sport, insisting it would be an "unacceptable" move due to the ongoing war in Ukraine.

However, Reinebo was stopped short of reading out the statement at the EOC Seminar as he was interrupted by Greek official Capralos, who is also an IOC member.

"I am sorry, we said very clearly that it was a decision of their participation from the IOC Executive Board and also regarding the discussion about Russia and Belarus and Ukraine and all other things that have a political connotations we are not going to discuss it and I expressed it very clearly in my opening remarks," said Capralos.

As ANOC secretary general Gunilla Lindberg was introduced to the stage after the exchange between Capralos and Reinebo, Tarasiuk tried to express Ukraine’s views, only to be stopped by Stavroula Kozompoli, a Greek Olympic water polo silver medallist who was a co-master of ceremonies.

"It’s not the right place and the President said before that it is not allowed.

Video footage of the meeting found that the microphones of both Tarasiuk and Reinebo had been cut off when they tried to respond.

Despite efforts to shut down discussion over Russia and Belarus during the EOC Seminar, it did not go away with Andre Cats, technical director for the Dutch Olympic Committee*Dutch Sports Federation, expressing his frustration that the Ukrainian and Swedish officials had been silenced.

"I must show my deep disappointment that the Nordic countries and Ukraine are not allowed to express their opinion at this seminar," said Cats.

"I have a deep feeling of disappointment."

Cats’ comments. which were greeted with applause, came after a presentation by Serbian Đorđe Višacki, an EOC Executive Board member who was sympathetic in his response.

"I had a deep feeling about what happened today before those presentation and it is always hard to grow after those kind of events especially knowing that in some of our member countries people are dying right now," said Višacki.

"I want use this opportunity as someone who grew up in a country where there was a decade of war and terrible casualties on all sides, I want to share this feeling with you without any wrong understanding.

"There is quite a few people here coming from Croatia, Kosovo, Bosnia and Herzegovina that were part of my former country and this whole group actually in all those times showed a very clear direction and led the way and represented a beacon of peace and friendship to the politicians.

"If we don’t preserve that here there is no one is going to do that.

"If we are not able in this place, in Ancient Olympia ... [to] leave that at that gate, then we will be swamped by all these things."

Russia and its ally Belarus have largely been frozen out of international sport since the invasion of Ukraine on February 24, with the IOC recommending that athletes and officials from both countries are banned from competitions.

However, neither the ROC or the NOCRB have been directly sanctioned by the IOC.

Capralos previously said that the EOC banned the ROC and NOCRB from the General Assembly in Skopje to "protect the proper functioning" of the meeting, citing "strong opposition" from some members to a plan for the two NOCs to participate remotely.

At the time, ROC President Stanislav Pozdnyakov described the decision to ban the pair as "frankly absurd".

Since then, the EOC formed a "dispute-resolution committee" to address disagreements with the ROC.