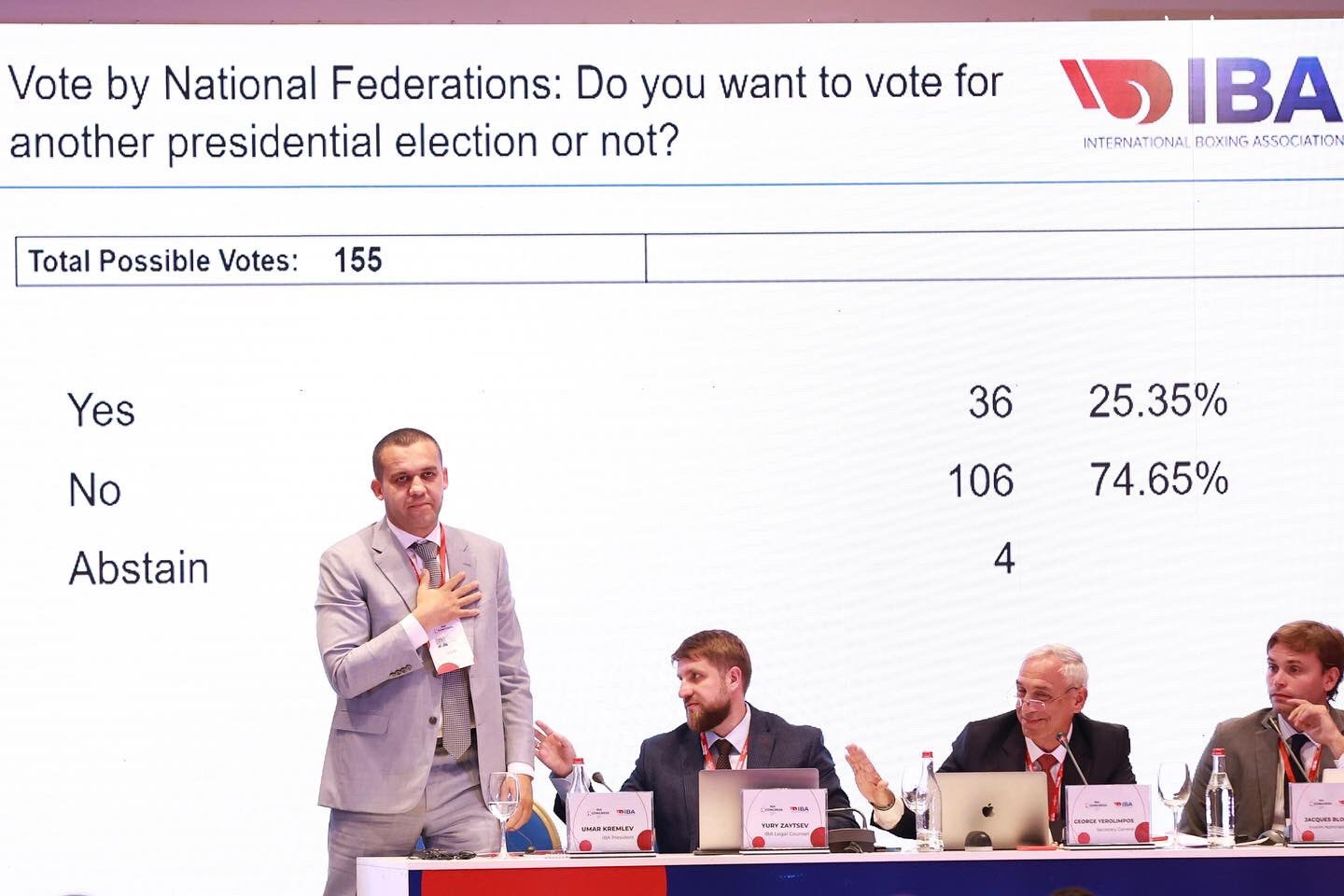 The International Olympic Committee (IOC) has claimed it is "extremely concerned" after the International Boxing Association (IBA) voted at its Extraordinary Congress against holding a fresh election to choose a President, leaving Russia's Umar Kremlev at the head of the world governing body.

Dutch candidate Boris van der Vorst's hopes of challenging Kremlev were crushed as 106 National Federations deemed that there should not be a re-run of the election, with 36 voting in favour of such a move and four abstaining.

"The IOC is extremely concerned about the Extraordinary Congress of the International Boxing Association," it told insidethegames.

"Amongst other concerns, this includes the fact that there was no election, but only a vote not to hold an election, and the fact that the recognised Ukrainian National Boxing Federation was suspended shortly before the IBA Congress for disputed reasons, and additionally the chaotic circumstances of the voting procedure."

The Boxing Federation of Ukraine (FBU) was suspended at the IBA Board of Directors meeting on Friday (September 23) citing "Government interference" amid a leadership dispute involving Volodymyr Prodyvus and Kyrylo Shevchenko.

IBA recognises its vice-president Prodyvus as the FBU President.

A dramatic and heated Extraordinary Congress was delayed for an hour by technical issues, with an increase of 24 National Federations present after proceedings resumed.

At the initial roll call, 97 National Federations were present in-person and 30 online.

However, when proceedings resumed after issues that led to a power cut were resolved, 99 National Federations were registered as present and 52 online, representing an increase of 24.

The number of National Federations eligible to vote further increased by one to a total of 152 after a test vote.

The Congress' decision not to allow the Dutch official to challenge Kremlev casts fresh doubt over boxing's efforts to preserve its place at the Olympic Games from Los Angeles 2028, following a series of International Olympic Committee warnings over IBA governance.

"Following these disturbing developments, the IOC Executive Board will have to fully review the situation at its next meeting," the IOC told insidethegames.

"This follows previous decisions of the IOC EB, amongst them the decision to disqualify IBA from running the boxing competition at the Olympic Games Paris 2024, as well as the qualifying events for Paris 2024, and that the Federation remains suspended.

"Boxing has also not been included in the sports programme for the Olympic Games LA28."

The first moment of drama came shortly prior to the power cut, when Swedish Boxing Federation President Per-Axel Sjöholm was handed a microphone and began addressing the Congress, although he had not been invited to speak by IBA's newly-appointed secretary general George Yerolimpos, who oversaw proceedings.

Sweden was one of the members of the Common Cause Alliance, a group of primarily Western nations which argued that electing van der Vorst represented IBA's only hope of preserving boxing's presence at the Olympic Games.

As voting to approve the minutes from the Extraordinary Congress in Istanbul began, the meeting was brought to an abrupt halt by a loss of power.

Yerolimpos called a 15-minute coffee break to rectify issues, but the interruption ultimately lasted for one hour.

The secretary general said the "collapse of a cable" had contributed to the issues, but that an official statement from organisers would be requested for inclusion in the minutes.

The Extraordinary Congress returned to the roll call, and the significant increase in the number of National Federations present was robustly queried by the Dutch delegate.

Yerolimpos claimed that the increase was due to late arrivals.

Boxing Australia then expressed disappointment at the FBU's suspension, but Yerolimpos said that the issue was not for discussion at the Extraordinary Congress.

The first vote held at the Extraordinary Congress approved the minutes from the last gathering in Istanbul by 115 to 13, with 12 abstaining.

Twenty-four National Federations expressed interest in taking the floor before a vote on whether to hold a re-run of the Presidential election, with strong and polarising opinions expressed by supporters of both Kremlev and van der Vorst.

Sjöholm urged Kremlev to call on delegates to back a Presidential election.

After the CAS decision on van der Vorst's eligibility in June, he had said: "CAS has stated that my opponent should have been eligible to stand for election, then let us have a new election."

However, Yerolimpos intervened to point out that Kremlev was not a voting delegate.

Further exchanges took place between Yerolimpos and the Dutch delegate over the non-presentation of accounts to the Extraordinary Congress.

USA Boxing President Tyson Lee insisted that staging an election was imperative to IBA, and that "it doesn't matter who you vote for".

Further support came from the French Boxing Federation for an election to go ahead, with its delegate cautioning "we are becoming a laughing stock to the world".

Momentum was gathering for a vote against staging a re-run of the election though, and several countries' delegates, particularly from Africa and the Americas, expressed strong support from Kremlev.

A significant majority of 74.65 per cent of voting delegates ultimately ruled that the Extraordinary Congress should not feature a Presidential election, which led to van der Vorst and a number of his supporters leaving the room.

The Extraordinary Congress concluded with an intriguing message from Kremlev, where he insisted "I am working for you, not a third organisation".