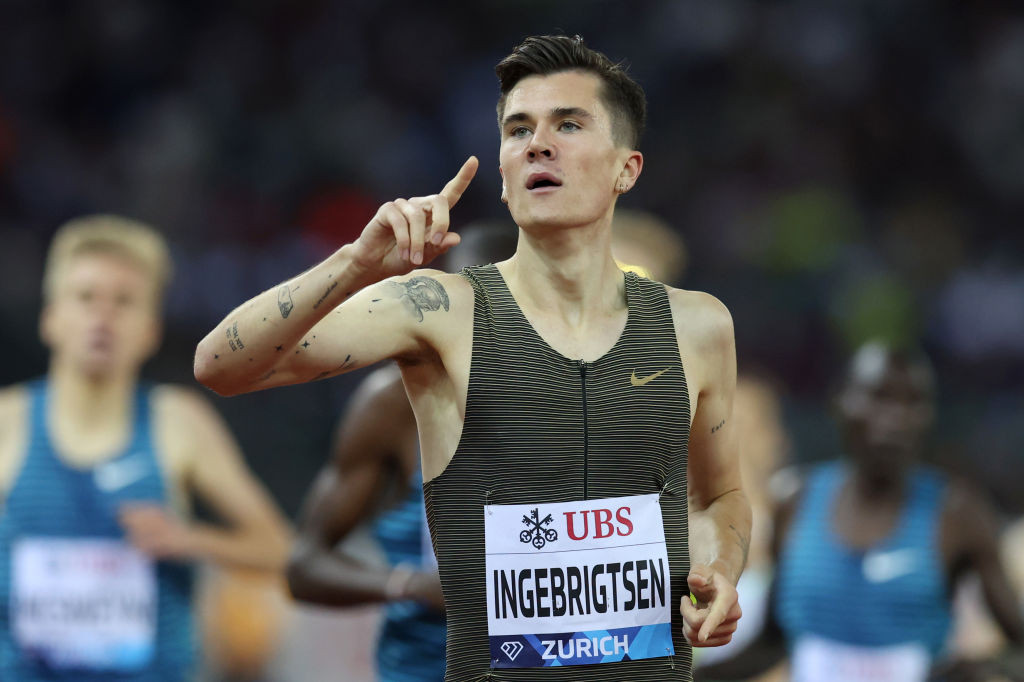 On a wet night at Zurich’s Letzigrund Stadium, a packed crowd saw the 21-year-old Ingebrigtsen, who secured his first world title in July, over 5,000m, earned his first Diamond League title in 3min 29.02sec, the fastest recorded this year.

He held off the challenge of Kenya’s 2019 world champion Timothy Cheruiyot, second in 3:30.27, and Australia’s Commonwealth champion Oliver Hoare, third in 3:30.59.

Meanwhile normal service was resumed for Fraser-Pryce, beaten over 100m by fellow Jamaican and world 200m champion Shericka Jackson in last week’s Brussels Diamond League meeting, as she won in 10.65sec - equalling the meeting record, the time being only 0.05sec off the one with which she currently stands third on the all-time list.

It was a fifth Diamond Trophy win for the 35-year-old sprinter.

Jackson was in second place, in 10.81, and went on to earn victory in the women’s 200m in 21.80 later in this finale to a uniquely busy athletics year.

Normal service was also resumed in the men’s pole vault, where world and Olympic champion Mondo Duplantis of Sweden, whose long unbeaten run was ended in Brussels last week, as he earned victory with a first-time clearance of 5.91m before going on to clear 6.07m.

Norway’s Sondre Guttormsen was second behind the 22-year-old Swede, equalling the national record with 5.86m.

The Dominican Republic’s growing power in the women’s 400m event was underlined as its runners took the top two places, with world and Olympic silver medallist Marileidy Paulino, who won in a national record of 48.99sec from compatriot Fiordaliza Cofil, who clocked 49.93.

Noah Lyles, the double world 200m champion from the United States, rounded off the evening in dynamic fashion with victory in 19.52sec.

The women’s 800m title went to Kenya’s Commonwealth champion Mary Moraa, in 1:57.63 from Natoya Goule of Jamaica, who clocked 1:57.85, with Britain’s world and Commonwealth silver medallist and European champion Keely Hodgkinson only managing fifth place in 1:59.06.

The men’s 800m saw Kenya’s world and Olympic champion Emmanuel Korir re-assert himself after recent defeats with victory in 1:43.26, the fastest run this year, ahead of Canada’s Marco Arop, second in a season’s best of 1:43.48, and Britain’s world 1500m champion and European 800m silver medallist Jake Wightman, third in 1:44.10.

Nigeria’s world champion and world record holder Tobi Amusan retained her women’s 100m hurdles title in a meeting record of 12.29, beating the mark of 12.22 set by Gail Devers of the United States in 2000.

Meanwhile in the women’s 400m hurdles, world silver medallist and European champion Femke Bol of The Netherlands ended her season on a high as she won in 53.03, her sixth sub-53 400m hurdles time of the season.

In the men’s triple jump a personal best of 17.70 from Cuba’s Andy Diaz Hernandez proved sufficient to beat a field in which former Cuban Pedro Pichardo, who has recently won world and Olympic gold for Portugal, was second on 17.63.

The women’s triple jump went, as expected, to Venezuela’s world and Olympic champion Yulimar Rojas, who raised her world record to 15.74m at this year’s World Indoor Championships in Belgrade, as she produced a best of 15.28.

"I mean this is everything. My second Diamond League trophy and another meeting record - it is the perfect cherry on top of my season."@mondohoss600, pole vault Wanda Diamond League champion 2022.#DiamondLeague#DLFinal?
? @WeltklasseZH pic.twitter.com/hj6jNJpYWQ

Kristjan Ceh, Slovenia’s 23-year-old world men’s discus champion, collected another accolade as he won with a last-round best of 67.10m, from Austria’s Lukas Weisshaidinger, who managed 65.70.

Valarie Allman of the United States, the Olympic women’s discus champion, had the final word over her predecessor, Sandra Perkovic thanks to a third-round effort of 67.77m - but the ever competitive Croatian almost reached her with a fifth-round throw of 67.31m.

Soufiane El Bakkali of Morocco, the world and Olympic men’s 3,000m steeplechase champion, secured the Diamond Trophy in a winning time of 8:07.67.

A first-round effort of 6.97m was enough to earn Serbia’s Rio 2016 bronze medallist and European champion Ivana Vuleta - nee Spanovic - a Diamond Trophy as she won the women's long jump.