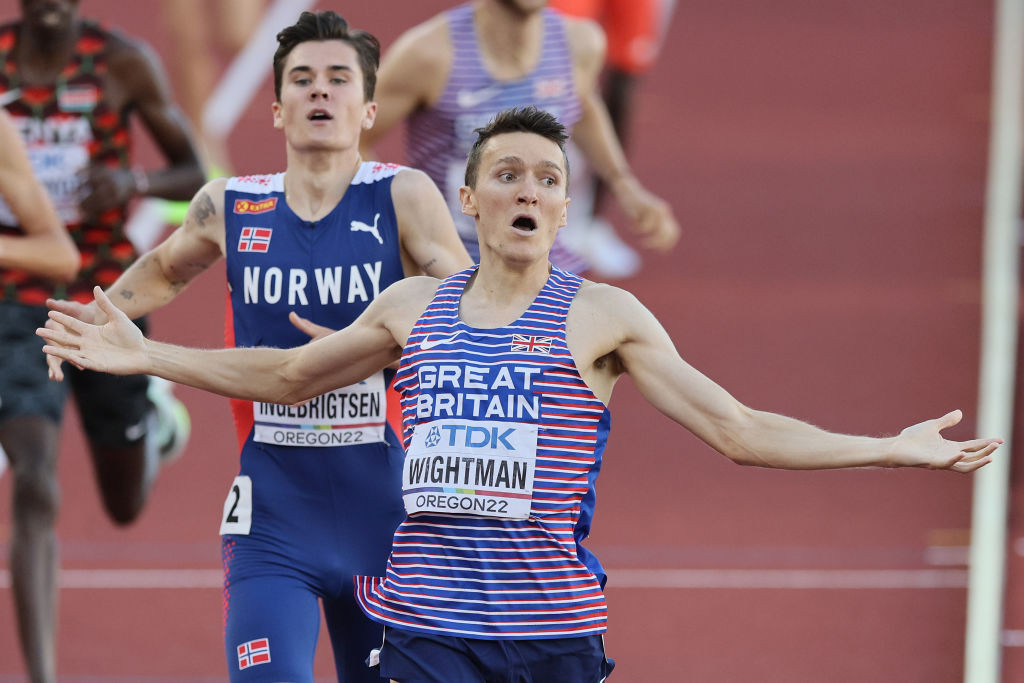 Britain's Jake Wightman beat Norway's 1500 metres gold medallist Jacob Ingebrigtsen to the world title in Eugene on a sensational evening of athletics at Hayward Field that saw a new generation of champions emerge.

Wightman became the first Briton to win the world 1500m title since Steve Cram earned gold in the inaugural Championships at Helsinki in 1983, and the first to win a global 1500m since Sebastian Coe retained his Olympic title in Los Angeles a year later.

That was the measure of his achievement - and all with his father and coach, Geoff, a former marathon international, providing the in-stadium commentary.

"I have got to tell you why the camera is on me," said Geoff Wightman.

"That’s my son. I coach him. And he's the world champion."

The 28-year-old from Nottingham, who won European and Commonwealth bronze in 2018 and finished 10th in last year’s Olympic final, tracked the 21-year-old favourite from the off, following him and Kenya's defending world champion Timothy Cheruiyot through the bell before making his move with 200 metres to go.

Having moved past both the leaders on the outside Wightman, his face hollow with concentration, set the controls for the line - and there was nothing Ingebrigtsen, who also had to accept silver in this year’s world indoors, could do to catch him.

After crossing the line in a personal best of 3min 29.23sec, making him the second fastest ever Briton behind Mo Farah’s 2013 clocking of 3:28.81, Wightman put his hands to his head in apparent disbelief.

It was all true and Cram was there to witness it, commentating for BBC.

"I knew the odds were getting more into my favour the later in the race it went," Wightman told The Guardian.

"I felt strong but Jakob is a beast and I didn't know if he was going to come past and there was no screen.

"I had some self belief that if I gave it a go and got past I'd probably get a silver but it never happened and I'm world champion."

Could Norway's Karsten Warholm, the man who won the Olympic title last summer in an unearthly world record of 45.94 mount a serious defence of his title in Eugene after suffering a hamstring tear one hurdle into his only previous race of the season at the Rabat Diamond League?

Having reached the final as second fastest qualifier in 48.00sec there was reason for him to hope.

Could home athlete Rai Benjamin, who beat Warholm’s then world record in the Olympic final only to find himself with silver, take one more step up with the home crowd behind him?

Or was the title destined for the 21-year-old Brazilian dos Santos, bronze medallist in Tokyo, who beat Benjamin in the opening Diamond League meeting of the season in Doha and was the man in form coming into the Championships?

Warholm, with characteristic courage, put it all out there, doing what he always does, going for broke from hurdle one.

He led to the halfway point before his lack of preparation finally began to tell.

With 100 metres to go the Norwegian was in bronze medal position as dos Santos and Benjamin came through, and in the space of the finishing straight he moved from third to seventh, finishing in 48.42.

The exuberant 22-year-old Brazilian did again what he has been doing all season and won, beating Warholm's Championship record in clocking 46.29, with the 24-year-old New Yorker adding another silver to his collection in 46.89 and his compatriot Trevor Bassitt moving up to claim bronze in a personal best of 47.39.

Was this the changing of the guard in the men's 400m hurdles?

Warholm and Benjamin would disagree.

The same question could be asked in the men's discus, where Slovenia's 23-year-old Kristjan Ceh, fifth in last year's Olympic final, finished what has been a breakthrough season with a breakthrough global victory with a Championship record of 71.13m.

That proved too much for a field that included Sweden’s world and Olympic champion Daniel Stahl, who could only managed fifth place with 67.10m despite the fact that he had rallied after defeats by Ceh earlier in the season to top this year's world list with 71.47m.

Patterson became the tenth Australian to win a world title as she added two centimetres to her personal best in clearing 2.02m, equalling the national record set by Nicola McDermott - now Olyslagers - in winning silver at the Tokyo 2020 Games.

The gold was hers after she cleared the height at her first attempt, with Ukraine’s 20-year-old world indoor champion and Olympic bronze medallist Yaroslava Mahuchikh having to settle for silver after clearing 2.02 after one failure.

Bronze went to Italy's Elena Vallortigara on 2.00, ahead of another Ukrainian athlete, Iryna Geraschenko, on countback, with Olyslagers finishing fifth on 1.96 in what was one of the highest quality women's high jump competitions ever witnessed.

Patterson, who won the Commonwealth title in Glasgow eight years ago as an 18-year-old, has returned to top form after some difficult years and has now become the first Australian woman to win a world or Olympics high jump title.

An evening of stupendous quality to round off day five of the Championships was compounded by a series of fearsomely competitive men's and women's 200m semi-finals.

In the men's racing, defending champion Noah Lyles topped qualifying in 19.62sec from his 18-year-old US rival Erriyon Knighton, who clocked 19.77, and third home sprinter Kenny Bednarek, the Tokyo 2020 silver medallist, who recorded 19.84.

Jamaica’s 100m silver medallist Shericka Jackson topped the women’s list on 21.67, ahead of  her compatriot Shelly-Ann Fraser-Pryce on 21.82, home sprinter Tamara Clark on 21.95 and Britain’s defending champion Dina Asher-Smith on 21.96, with Jamaica'a Olympic champion Elaine Thompson-Herah in the mix on 21.97.

Niger's Aminatou Seyni is on 22.04 and Mujinga Kambundji of Switzerland earned the final qualifying place with a national record of 22.05.