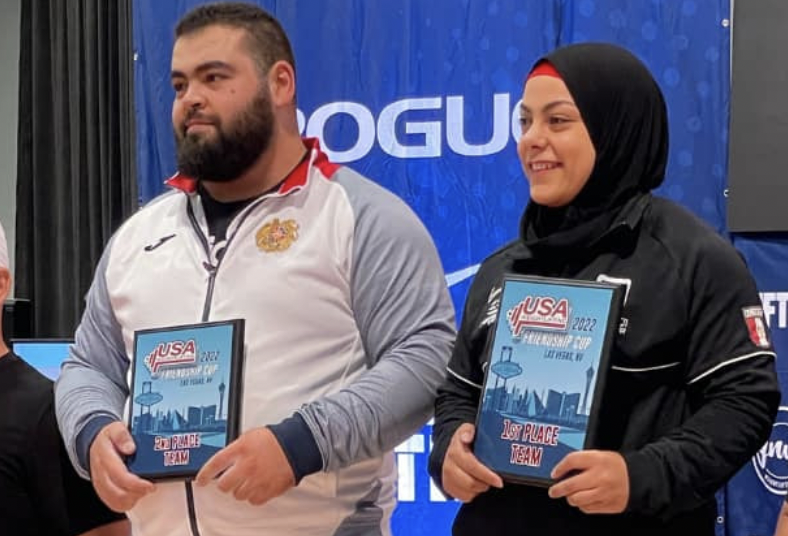 Olympic medallists were among weightlifters from seven countries who competed at - but not in - the USA National Championships in Las Vegas.

In a landmark event on the weightlifting calendar, the inaugural USA Weightlifting (USAW) Friendship Cup, international mixed gender teams of two performed alongside Americans who were competing in their own competition.

The format was devised by Ursula Papandrea, USAW's general secretary who was recently elected first vice-president of the International Weightlifting Federation (IWF).

The Friendship Cup was not an IWF-sanctioned event but mixed gender competitions and new formats have been discussed within the weightlifting community in recent months and its status could change before the 2023 version is held, possibly at The Arnold strength sports festival.

Papandrea, who will attend her first IWF Board meeting in her new role this week, said: "At a time when the weightlifting community seems quite fractured, I hope the Friendship Cup highlights the similarities between athletes as opposed to their differences.

"The intent is to bring a sense of unity among athletes, who are the potential leaders of tomorrow.

"There should be a bond between all weightlifters that outweighs any of our differences."

The winners were Sara Samir (who competes as Sara Ahmed) from Egypt and Andranik Karapetyan of Armenia.

Another Armenian, the super-heavyweight Gor Minasyan, paired with the American Madeline Staniszewski - in her first international competition - for second place, and the third place went to Maddison Pannell of the host nation and Joshua Uikilifi of Tonga.

Friendship Cup athletes lifted in their respective bodyweight sessions of the US Championships, and their team score was achieved by combining their Sinclair points totals - a global measure of performance across all weight categories.

Armenia sent five men to the Friendship Cup, while the US entered four women.

Egypt and Tonga each fielded two athletes while Botswana, Kenya and Uganda had one each.

Kuinini Manumua, a 2020 Olympian for Tonga who holds dual citizenship, won the women’s +87kg title at the National U-25 Championships and placed fourth in the Friendship Cup with the Armenian Samvel Gasparyan, the 2021 European champion at 102kg.

It was a rare appearance on the platform by Samir, who became the first woman from the Arab world to win a weightlifting medal at the Olympic Games in 2016 and is one of Egypt’s top female sports stars.

She has not competed since August 2019 in an IWF event.

Egypt was banned from international competition for two years in 2019 because of a doping scandal in 2016, in which Samir was not involved.

Samir was then one of six Egyptian athletes who tested positive for a stimulant at the African Games in Morocco in 2019.

She and the others agreed to serve a two-year suspension that expired in January this year.

Because the substances detected were not steroids, the standard length of ban was halved.

In videos posted on social media in March, Samir showed herself lifting 150kg in the 76kg category, which would have won her the gold medal in clean and jerk in three weight classes - 76kg, 81kg and 87kg - at the 2021 IWF World Championships.

The best men’s performance was from the super-heavyweight Varazdat Lalayan of Armenia, who made 201-220-421 for 424 Sinclair points.

Meanwhile, another big star of Egyptian weightlifting, the 2016 Olympic medallist Mohamed Ehab, has announced his retirement.

He is expected to go into coaching and has been appointed to a development role by the Egyptian Sports Ministry.