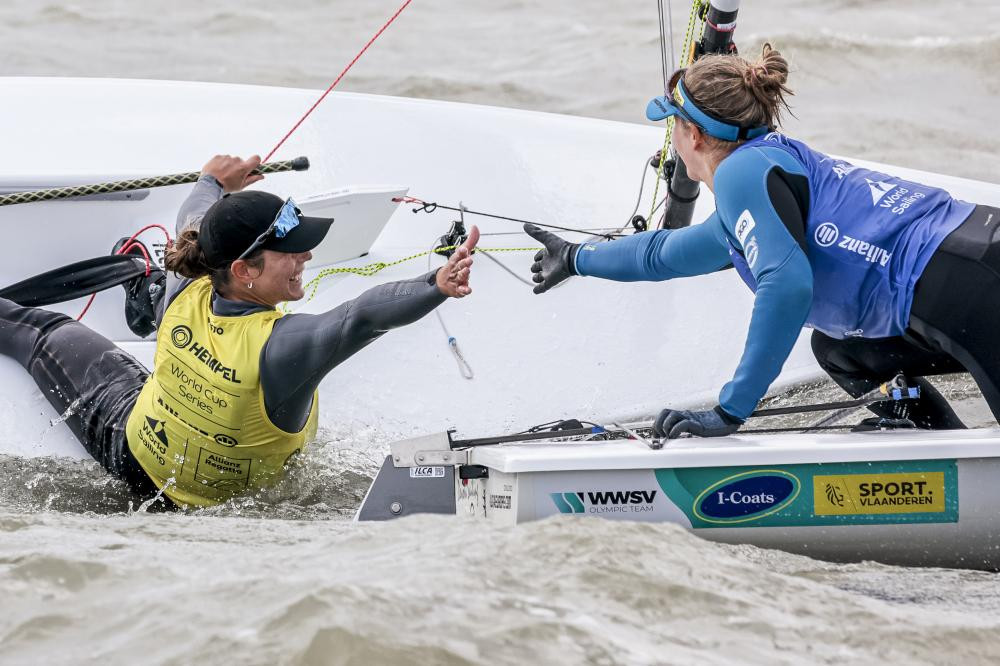 Odile van Aanholt and Tokyo 2020 bronze medallist Annette Duetz of The Netherlands had a healthy lead in the 49erFX class but almost let it slip finishing seventh, 10th and second while Belgium's Isaura Maenhaut and Anouk Geurts won all three races including the medal race, worth double points.

Despite losing the medal race, Van Aanholt and Duetz scraped overall victory with 53 points to the Belgians' 55 while Olivia Price and Evie Haseldine of Australia took bronze with 60 points.

"It was a very exciting race," said Duetz.

"We fought hard, we really had to work hard because we made a mistake at the start.

"But it went really well and we were able to sail on the shifts, in the right rhythm and with the wind changes.

"In the end, we crossed the finish line just behind the Belgians."

Van Aanholt and Duetz's compatriots Laila van der Meer and Bjarne Bouwer successfully defended their Nacra17 title with a win in the medal race which was the sixth consecutive victory at the event.

They ended on 33 points, ahead of Joao Siemsen and Marina Arndt of Brazil with 40 and Austrians Laura Farese and Matthäus Zöchling on 43 points.

Greece's Vasileia Karachaliou left nothing to chance in her bid to retain the ILCA 6 yellow jersey.

She went toe-to-toe with Belgian rival Emma Plasschaert in an aggressive race where they were both called back by officials which suited Karachaliou as she finished 10th while Plasschaert's crossed the line in eighth.

Karachaliou finished on 68 points overall, beating Plasschaert's 71 while Anna Munch of Denmark rounded out the top three with 75 points.

Yves Mermod and Maja Siegenthaler started the day in front of the 470 mixed division and secured the gold medal with a third place finish in the last race.

The racing is set to continue tomorrow with four more medal races scheduled.

However, thunder is forecast and as a result, organisers are contemplating bringing the start time forward.