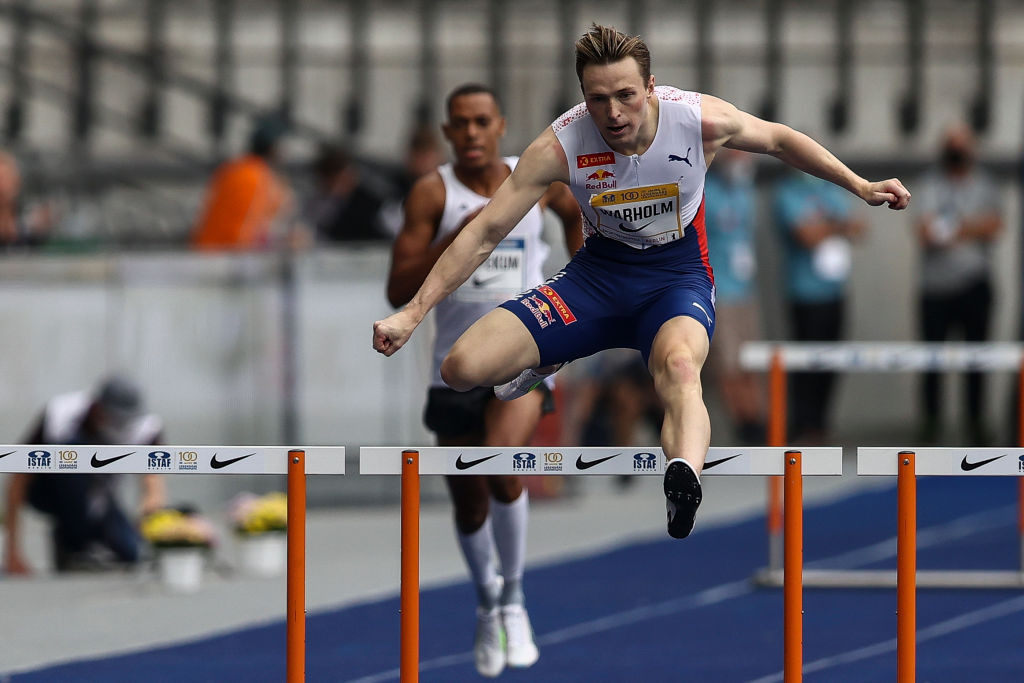 The home focus, however, will be on local hero Soufiane El Bakkali, the Olympic men’s 3,000m steeplechase champion.

Warholm, who smashed his own world record in the Tokyo 2020 final as he ran 45.94 seconds, will use the Meeting International Mohammed VI d'Athletisme de Rabat as a first step to what he hopes will be a second successful defence of his world title in Eugene, Oregon this summer.

The 26-year-old Norwegian, who last competed in September, has seen Brazil’s 21-year-old Tokyo bronze medallist Alison dos Santos gain traction this season with his defeat of Tokyo silver medallist Rai Benjamin of the United States at the opening Wanda Diamond League meeting of the season in Doha, following it up with victory at the third meeting of the series, in Eugene on May 28, in 47.23sec, the fastest run so far this year.

That will certainly be a marker for Warholm as he takes on a field that includes Turkey’s Rio 2016 bronze medallist Yasmani Copello.

But it will be El Bakkali, whose long-awaited gold in the men’s 3,000m steeplechase last year was Morocco’s only medal of the Tokyo 2020 Olympics, who will be the centre of attention for local fans.

The 26-year-old from Fez, whose Olympic gold came after missing out on a medal by one place at Rio 2016, will certainly be hoping to fare better than he did at that last edition of this meeting.

On that occasion he fell away to eleventh place as Getnet Wale pressed on to win in an Ethiopian record of 8min 6.01sec - although three months later El Bakkali added world bronze in Doha to the world silver he had won in London in 2017.

In Tokyo he became the first non-Kenyan to win the men’s Olympic 3,000m steeplechase title since Poland’s Bronislaw Malinowski in 1980 and the first to win it at a Games where Kenya were contesting the title since Belgium’s Gaston Roelants in 1964.

The task he faces will be formidable, however, as he takes on the two athletes who followed him home in Tokyo - Ethiopia’s Lamecha Girma and Benjamin Kigen of Kenya - as well as France’s Rio 2016 bronze medallist, Mahiedine Mekhissi-Bennabad.

Jamaica’s double Olympic 100 and 200m champion Elaine Thompson-Herah, who opened her season proper with a 100m victory in 10.79sec at the last Diamond League meeting in Eugene, Oregon, will continue her preparations for what would be a first individual world title of any kind this summer.

Ukraine’s Olympic bronze medallist and world silver medal winning high jumper Yaroslava Mahuchikh will seek to maintain her excellent form in a season where, despite a nightmare three-day trip - initially under shelling - from her native city of Dnipropetrovsk to Belgrade, she managed to win world indoor gold.

Olympic 800m champion Emmanuel Korir will take on the fellow Kenyan whom he beat to gold in Tokyo, Ferguson Rotich.

But other Kenyans will be in the mix given the presence of Collins Kipruto, a consistent performer last year, and the startling new talent of 17-year-old Emmanuel Wanyonyi, last year’s world under-20 champion, who earned victory in the 800m at the World Athletics Continental Tour Gold meeting in Ostrava on Wednesday (June 1) in 1:44.15.

The men’s 1500m also features huge Kenyan talent in the form of Abel Kipsang, who clocked a personal best of 3:29.56 as he missed out on an Olympic medal by one place, having set what was then an Olympic record of 3:31.65 in the semi-finals.

Mohamed Katir of Spain, with a best of 3:28.76 from last year, and Britain’s Olympic finalists Jake Heyward and Jake Wightman, who ran 3:29.47 in 2020, will challenge strongly.

In the men’s discus Kristjan Ceh will be hoping to maintain the startling form he displayed at the Birmingham Diamond League, where he set a Diamond League and Slovenian record of 71.27 metres, improving on his previous mark of 68.75m and moving up to tenth on the all-time list.

The 22-year-old, who competes in glasses, will be wary of the response however of Sweden’s world and Olympic champion Daniel Stahl, who could only finish third in Birmingham on 65.97m.

Greece’s Olympic long jump champion Mitiadis Tentoglou, who will seek to add world outdoor gold this season to the indoor version he already has in his possession, will be looking for an advance on the decent start he has already made to his season by registering 8.36m last month.

The 8.45m achieved by decathlete Simon Ehammer at last weekend’s multi-events competition in Gotzis may be a motivating target for him - and the Swiss athlete will also be there in person.

Burundi’s former world and Olympic women’s 800m silver medallist Francine Niyonsaba, obliged to compete in distances over 1500m following the World Athletics ruling on female athletes with high levels of naturally-occurring testosterone, will be favourite to win the women’s 3,000m.

Sandi Morris of the United States, who put her injury-undermined Tokyo 2020 experience behind her to successfully defend her world indoor pole vault title earlier this year, remains on a high, having won at the Birmingham Diamond League with 4.73m, the best outdoor mark of the year so far.

She will face strong opposition in the form of Britain’s Tokyo 2020 bronze medallist Holly Bradshaw, who will be keen to make up for her failure to clear at 4.45m in Birmingham, Slovenia’s Tina Sutej and Greece’s Rio 2016 gold medallist Katerina Stefanidi.

Ethiopia’s 21-year-old Freweyni Hailu, who ran 3:56.28 in the women’s 1500m at Monaco last year, is the fastest entrant for the metric mile in Morocco, although she faces strong opposition from four opponents who have also beaten four minutes in compatriots Axumawit Embaye and Hirut Meshesha, Kenya’s Winnie Nanyondo and Australia’s Linden Hall.