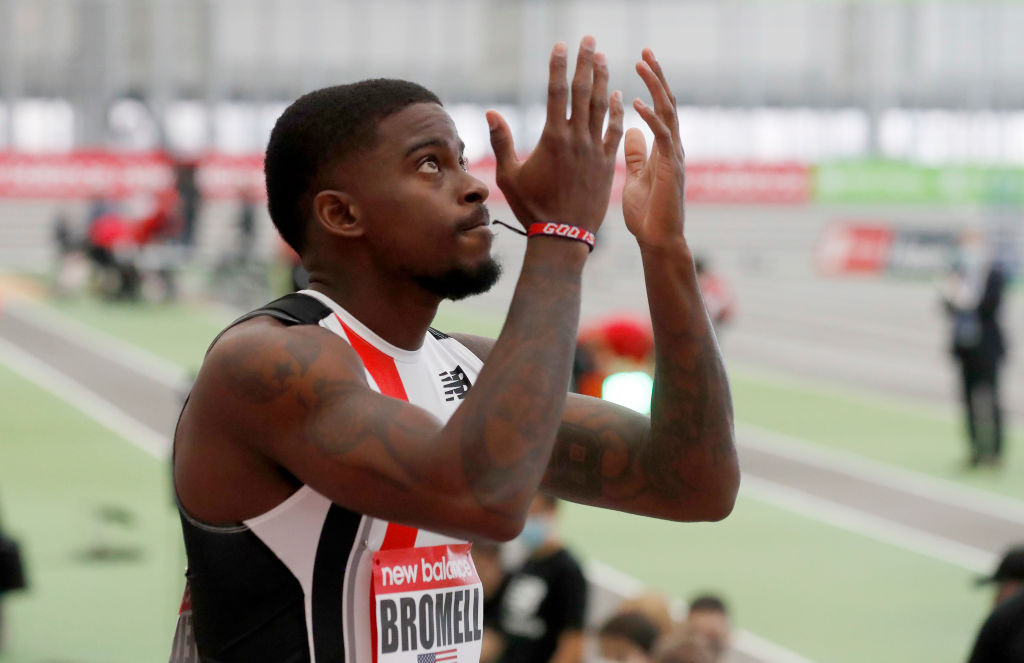 Trayvon Bromell’s mercurial 100 metres career had an up rather than a down day at the Prefontaine Classic as he earned a victory that may not have been one of his swiftest - in 9.93sec on a blustery afternoon - but might, given the opposition, have been one of his most significant.

The 26-year-old from Florida, world indoor champion six years ago and with a 100m personal best of 9.76 from last year that places him joint sixth on the all-time list, false-started his way out of last week’s Birmingham Diamond League meeting before vowing to put that right at today’s third edition of the Wanda Diamond League series.

That he did, in the Hayward Field arena that is due to host this summer’s World Championships, as he came home ahead of three super-swift fellow Americans in Tokyo 2020 silver medallist Fred Kerley, who clocked 9.98, world champion Christian Coleman, third in 10.04, and world 200m champion Noah Lyles, who recorded 10.05.

Lightning in a a bottle.

Another hugely talented US athlete less than satisfied with his early season form, Michael Norman, produced a performance he could be satisfied with as he won the men’s 400m in a Diamond League and meeting record of 43.60sec, not far off his 2019 personal best of 43.45.

The 24-year-old home sprinter finished clear of Grenada’s London 2012 champion and Tokyo 2020 bronze medallist Kirani James, who clocked 44.02, and European champion Matthew Hudson-Smith, whose time of 44.35 bettered the British record set by Iwan Thomas in 1997 by one hundredth of a second and fell just shy of the 1987 European record of 44.33 set by East Germany’s Thomas Schoenlebe.

Jamaica’s double Olympic women’s 100 and 200m champion Elaine Thompson-Herah did not manage to match her best 100m time of 10.54 set at this meeting last year, which put her second on the all-time list, but a clocking of 10.79 in her first big race of the season was enough to defeat a world class field.

Home sprinter Sha’Carri Richardson, who missed last year’s Olympics because of a three-month suspension after testing positive for cannabis, was second in 10.92, just 0.2 seconds off her best, and Thompson-Herah’s compatriot Shericka Jackson, the Tokyo 2020 bronze medallist, was third in the same given time.

Britain’s world 200m champion Dina Asher-Smith, whose Tokyo 2020 ambitions were undermined by a hamstring injury, was fourth in a season’s best of 10.98 a week after winning the Birmingham Diamond League 100m.

The absence of home talent Rai Benjamin, the Tokyo 2020 silver medallist, from the 400m hurdles offered Brazil’s 21-year-old Olympic bronze medallist Alison Dos Santos - who beat Benjamin in the opening Diamond League meeting of the season in Doha - a perfect chance to shine, and he took it by winning in 47.23, the fastest run this season.

Similarly 20-year-old Keely Hodgkinson of Britain, despite being denied a run against the 19-year-old American who beat her to the Tokyo 2020 800m title last summer - Athing Mu withdrew late after suffering with COVID-19 - made the most of her opportunity, winning in 1min 57.72sec, the fastest time this year, from home runner Ajee Wilson, the world indoor champion, who clocked 1:58.06.

Norway’s Olympic champion Jakob Ingebrigtsen clocked the world’s fastest mile time so far this year, 3min 49.76sec, as he defeated a field that included the Tokyo 2020 silver medallist and 2019 world champion Timothy Cheruiyot, who was third in 3:50.77 with Australia’s Oliver Hoare getting in between the two big wheels in a personal best of 3:50.65.

This super-talented athlete has had an up and down time in the space of the past 12 months - after missing a 10,000m medal by one place in his Olympic debut he broke Cheptegei’s five kilometres road world record in December by two seconds, clocking 12min 49sec, but he failed to progress from the 3,000m heats at the World Athletics Indoor Championships in March.

The women’s 1500m also produced the fastest time of the season so far through Kenya’s double Olympic champion Faith Kipyegon, who clocked a meeting record of 3:52.59, with Ethiopia’s Olympic 5,000m bronze medallist Gudaf Tsegay second in 3:54.21 and Canada’s Gabriela Debues-Stafford third in 3:58.62.

At times competitors in the women’s long jump were operating with following winds well in excess of the legal limit for record purposes of 2.00 metres per second, which can sometimes propel athletes too swiftly towards the take-off board for comfort.

Sweden’s Khaddi Sagnia registered 6.80 metres with the benefit of a 2.9mps tailwind, before winning with a wind-legal personal best of 6.95m.

The conditions didn’t appear to put off home shot putter Ryan Crouser, the double Olympic champion who set the world record of 23.37m at the Tokyo 2020 trials in Eugene last year.

His winning effort of 23.02m was the best seen so far this season, with fellow American Joe Kovacs - who beat Crouser to the 2019 world title by centimetres with his final throw in the greatest shot put ever seen - finishing second on 22.49m.