Iran's Greco-Roman wrestlers displayed their dominance at the Deaflympics by winning half of the golds available in Caxias do Sul in Brazil.

Seyed Sadegh Abolvafaei, Mehdi Bakhshi, Abouzar Hafshajani and Akbar Saberi beat all their competitors in their individual weight divisions to put themselves in a class of their own at the UCS Ginásio Poliesportivo.

Abolvafaei got things underway for Iran with a triumph in the 55-kilograms division against Bulgaria’s Panayot Stefanov Dimitrov.

Sargis Sargsyan of Armenia and Smadiiar Zhumakadyrov of Kyrgyzstan picked up bronzes in the category,

Next came gold medals for Hafshajan and Saberi, who overcame Ahmet Talha Kacur of Turkey and Assylzhan Tazhiyev of Kazakhstan in the 87kg and under-97kg classes respectively.

Armenia’s Narek Nikoghosyan and the United States’ Ashten Gene Johnson became 87kg bronze medallists while Amaree McKenstry of the US and Andrii Kosov of Ukraine achieved the same feat for the 97kg category.

Ali Karimikehi almost made it five golds for Iran but he was unable to better Turkey’s Mehmet Ali Yiğit in the under-67kg final.

Muhammet Akdeniz lost to Lithuania’s Mantas Sinkevičius in the 77kg division, Bayram Aksu fell to Ukraine’s Roman Iashchenko in the 82kg class and Mehmet Uysal was outfought by Kazakhstan’s Khairatkhaan Shonku in the heaviest classification, 130kg.

Milias Markov of Greece and Alexandros Papadatos of Kyrgyzstan were rewarded with bronzes in the 130kg group to boost their nations’ performance. 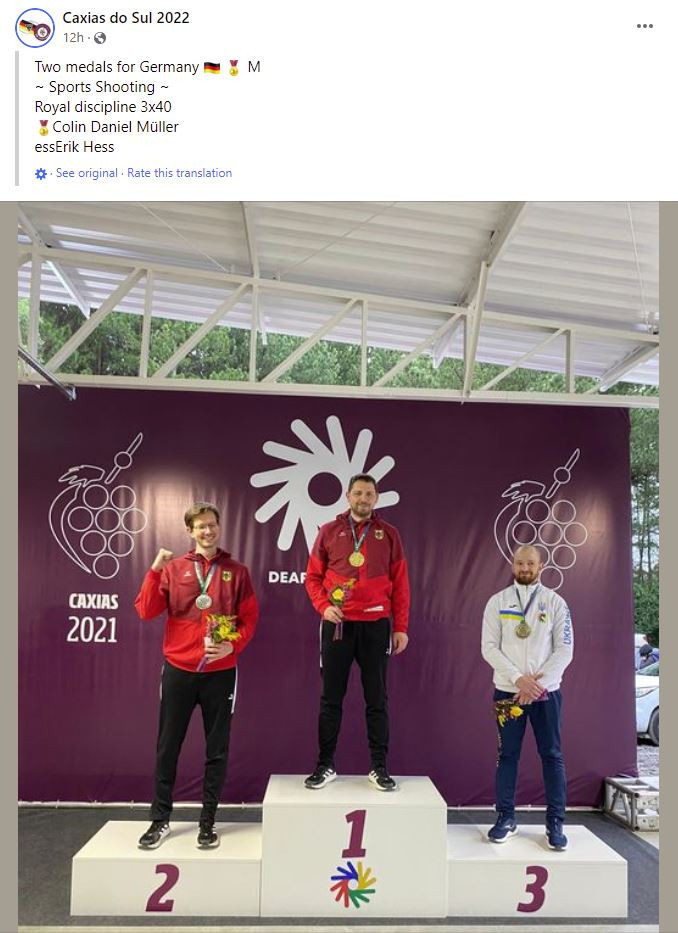 Thomas Keinath upgraded his silver at Samsun 2017 after receiving a walkover versus Changjoon Lee of South Korea.

Yi-Hsiang Wang was awarded bronze for his 4-0 defeat to Keinath in the semi-final and Austria’s Christopher Krämer, who lost 4-2 to Lee, joined him.

Roksolana Budnik put Ukraine on the podium again for winning bronze after her 4-0 defeat to Jurkova in the semi-finals.

In the shooting, Germany claimed a one-two on the men’s 50m rifle three positions podium thanks to the efforts of Colin Daniel Müller and Erik Hess as Oleksandr Kostyk ensured Ukraine were in the top three once again.

Professional men’s golfer Allen John got the better of Canada’s Russel Bowie to give Germany another gold while Isaac Ogolla Makokha claimed bronze for Kenya.

Diksha Dagar added to India’s tally in the women’s event after overcoming the US’ Ashlyn Grace.

In the badminton finals, South Korea dominated the men’s competitions with Jisoo Woo and Myeongsoo Seo taking gold and silver in the single’s event as well as the title in the doubles.

Abhinav Sharma of India and Reznikas picked up bronzes for their countries in the singles tournament as Thailand duo Ittikon Punyangam and Sriwat Mattayanumat and Japanese couple Ayumu Ohta and Masaaki Numakura claimed the same medals for the double’s competition.

Jerlin Jayaratchagan was a standout performer for India after originally championing 21-17, 21-18 against Austria’s Katrin Neudolt in the women’s singles.

Jayaratchagan then partnered with Sharma to win the mixed doubles title in straight sets versus Boon and compatriot Edmund Seng Keong Teo.

Ukraine still sits top of the medals table with the US and Japan in second and third.

The competition is scheduled to finish on Sunday (May 15).