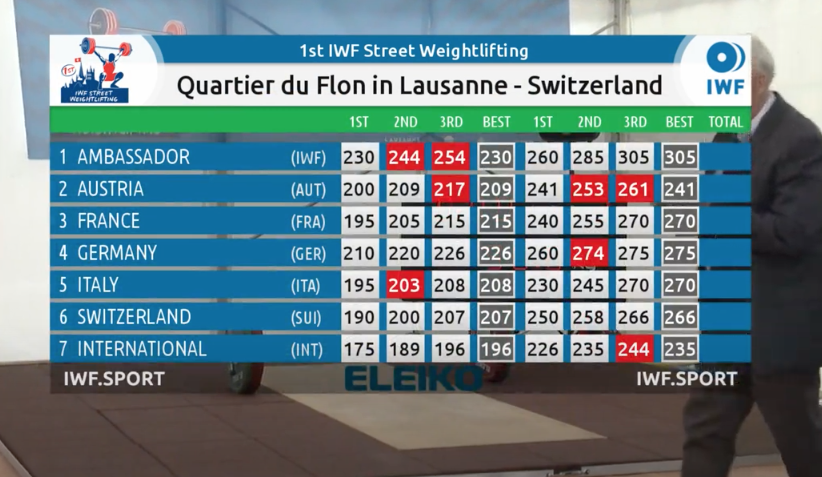 The pair were both made Athlete Ambassadors by the International Weightlifting Federation (IWF) 10 days ago and they competed in the first IWF Street Weightlifting Competition as "Team Ambassador".

A bad weather forecast - which turned out to be right - forced the IWF to reschedule the competition, moving it forward by three hours.

Fortunately, the heavy rain abated during the contest, and the seven teams, with one male and one female on each one, were able to complete the proceedings without mishap.

Morrow continued her outstanding progress by making a career-best total of 201kg, but Paredes - also named an Athlete Ambassador by the IWF - is still recovering from hip surgery.

He restricted himself to a clean and jerk of 130kg, which is 75kg less than what he made in defeating Meso to win the 96kg world title last December.

Meso made by far the biggest lift of the day, opting for 215kg for his final clean and jerk, looking very pleased when he made it.

The Meso-Yazmin pair made a combined snatch of 230kg and a clean and jerk of 305kg for a total of 535kg.

That earned them  a score of 891.9 Robi points, the measure used to determine the finishing positions, which is calculated from an athlete's body weight and performance.

The points were not shown on the live scoreboard, so the finishing order was not immediately clear.

In the clean and jerk, the Italian pair of Fabio Pizzolato and Martina Bomben had a lower total of 270kg than the German team of Ruben Hofmann and Sabine Kusterer with 275kg.

But the Italians, both of whom compete in lighter weight classes than the German pair, edged into second place overall with 810.9 Robi points to the Germans' 807.3.

The Street Weightlifting Competition, sponsored by the equipment manufacturer Eleiko, followed another celebration for the IWF in Lausanne on Friday.

It invited "members from the Olympic sports community" to its headquarters at the Maison du Sport International, to finally mark its move of offices from Hungary to Switzerland.

The move was made a year ago but the IWF could not mark the occasion at the time, because of COVID-19.

"It marks a move to a new and bright future for the IWF and for global weightlifting," said Mike Irani, the IWF’s interim President.

"We are conscious about our past issues, but today we look forward with confidence and optimism.

"So we are very pleased to see so many members from the sports world present at the IWF office inauguration."