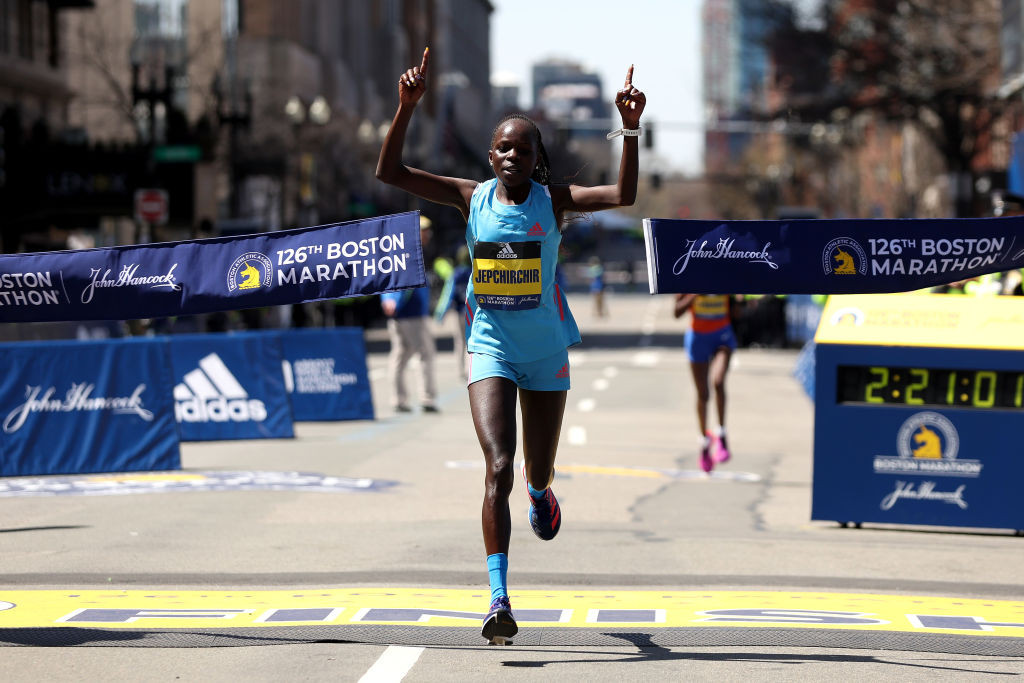 Olympic champion Peres Jepchirchir won the women’s title at the 126th Boston Marathon and compatriot Evans Chebet made it a Kenyan double as he earned his first major marathon victory.

In the wheelchair races, Daniel Romanchuk of the United States and Switzerland’s Manuela Schär both finished well clear of all opposition in their respective races.

The two raced on alone over the final five kilometres after Kenya’s 2021 London Marathon champion Joyciline Jepkosgei dropped out of contention.

Inside the final 2km Jepchirchir attempted to kick clear, but then dropped back behind her Ethiopian rival after appearing to have misjudged where the finish line was.

Battle was resumed over the final stages, even into the final straight, with Jepchirchir securing her fifth consecutive marathon victory in a time of 2 hours 21min 2sec, with Yeshaneh finishing four seconds behind.

There was in this a distinct echo of the epic 1982 men’s race in Boston where Alberto Salazar narrowly won a gripping contest with fellow American Dick Beardsley.

That compounded her outstanding record in Boston, where she won the 2017 title aged 37 and finished second two years later.

Chebet, 33, who became the seventh-fastest man in history when he earned the Valencia Marathon title in 2020 in a time of 2:03:00, earned his first World Marathon Majors win with two decisive kicks.

The first came with 7km to go, swiftly sorting out the bulk of the 15 runners in contention at that point, including Kenya’s 2017 and 2019 New York City Marathon winner Geoffrey Kamworor.

Tanzania’s Gabriel Geay was the only one to cover Chebet at this point, but another kick took the latter racer clear.

Chebet, who failed to finish in his only previous participation in Boston in 2018, when the race was held in a rainstorm, crossed the line in 2:06:51, with Cherono 30 seconds behind and Kipruto third in 2:07:27 - completing an all-Kenyan podium - with Geay fourth in 2:07:53.

The 126th #BostonMarathon Women's Champion is @PeresJepchirch3 in 2:21:01. Peres is the 5th Olympic Gold Medalist to win Boston.#Boston126 pic.twitter.com/q5IxrMoDuU

Speaking via a translator, Chebet said of his decisive move: "The coach told me that when you see other runners coming close to you, you have to run harder and leave them.

"I knew that my competitors were strong so I was trying really hard to stay ahead of them.

"When I opened a gap, I was able to slow down a little bit."

Romanchuk, who won in Boston in 2019 and won Paralympic 400 metres gold and marathon bronze last year, finished almost six minutes clear of his nearest challenger in 1:26:58.

Paralympic marathon champion and five-time Boston winner Marcel Hug of Switzerland pulled out on the morning of the race after coming down with coronavirus-like symptoms.

His fellow Swiss racer, Schär, won by a similar margin, finishing more than five minutes ahead to claim her fourth Boston triumph and a 15th World Marathon Majors success in a time of 1:48:08.