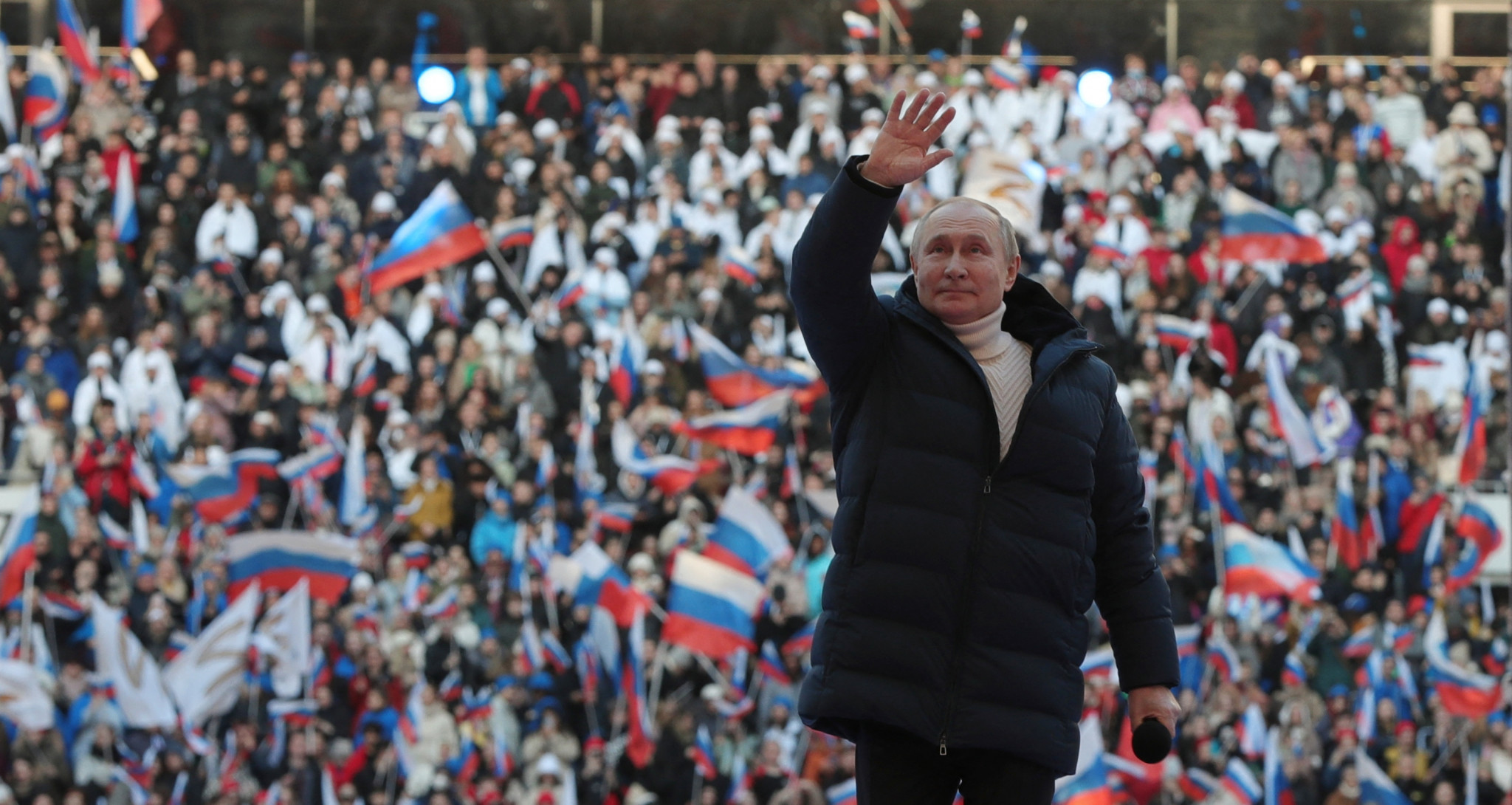 Photographs showed gymnasts Dina and Arina Averina and four Russian figure skaters on stage in an arena which was the main stadium for the 1980 Olympic Games, with their medals while wearing the "Z" symbol.

The figure skaters are understood to be ice dance partners Nikita Katsalapov and Victoria Sinitsina, and pairs skaters Evgenia Tarasova and Vladimir Morozov, who all won medals at the Beijing 2022 Winter Olympics.

Putin used the rally in the Stadium, where IOC and FIFA Presidents Thomas Bach and Gianni Infantino, respectively, had sat in the same row as him to to watch the 2018 FIFA World Cup final between France and Croatia, to praise what he called the country’s "special operation" in Ukraine and to mark the anniversary of the annexation of Crimea.

Kolinda Grabar-Kitarović, then the President of Croatia but now an IOC member, also sat next to Putin during the World Cup final that France won 4-2.

During today's rally, thousands gathered inside to cheer Putin, sing patriotic songs, wave Russian flags, and hold nationalist banners - with some including the symbol “Z”.

The Luzhniki Stadium has a capacity to accommodate 81,000 people but according to local police around 200,000 people attended the rally.

It was claimed that Russian Government employees had been bused in specially for the event and warned they would lose their jobs if they did not attend.

Putin, dressed casually in a turtleneck jumper and coat, told the patriotic crowd the that military action in Ukraine was aimed at ending "genocide" in the region, a claim flatly denied by world leaders.

"We know what we should do now and how we should do it and we will implement all our plans," he told the crowd from a large stage in front of signs that read "For a world without Nazism/For Russia".

Putin paraphrased the bible during his speech to say "there is no greater love than giving up one’s soul for one’s friends" when speaking of Russian troops, and also quoted an 18th century Russian naval commander Fyodor Ushakov.

"He once said that these thunderstorms will bring Russia glory," Putin said.

A broadcast of Mr Putin’s brief speech on Russian state television then suddenly cut off without showing how he concluded his speech or left the stage.

As of March 15, the United Nations’ Office of the High Commissioner for Human Rights has so far recorded 1,900 civilian casualties in the Russia-Ukraine war with 726 people killed - including 52 children.

Also, according to United Nations data, over three million people have fled Ukraine since the Russian invasion began on February 24.

The Luzhniki Stadium gained international attention in 1980 when it was used as the main venue for that year's Summer Olympic Games.

It hosted the Opening and Closing Ceremonies, athletics competition, events, the football finals and the programme of equestrian events.

Two years later during a second round UEFA Cup match between Russian side FC Spartak and HFC Haarlem of The Netherlands, at least 66 people were reported to have died during a crush, as they rushed to exit the venue to make it to the metro service towards the end of the match.

Certain estimations put the number of fatalities closer to 340.

The venue went on to host the 1999 UEFA Cup final between Italian team Parma and French side Marseille and the all-English 2008 Champions League final between Manchester United and Chelsea.

Football side Spartak Moscow had used the Stadium for their club matches before moving to the Otkritie Arena in 2014.