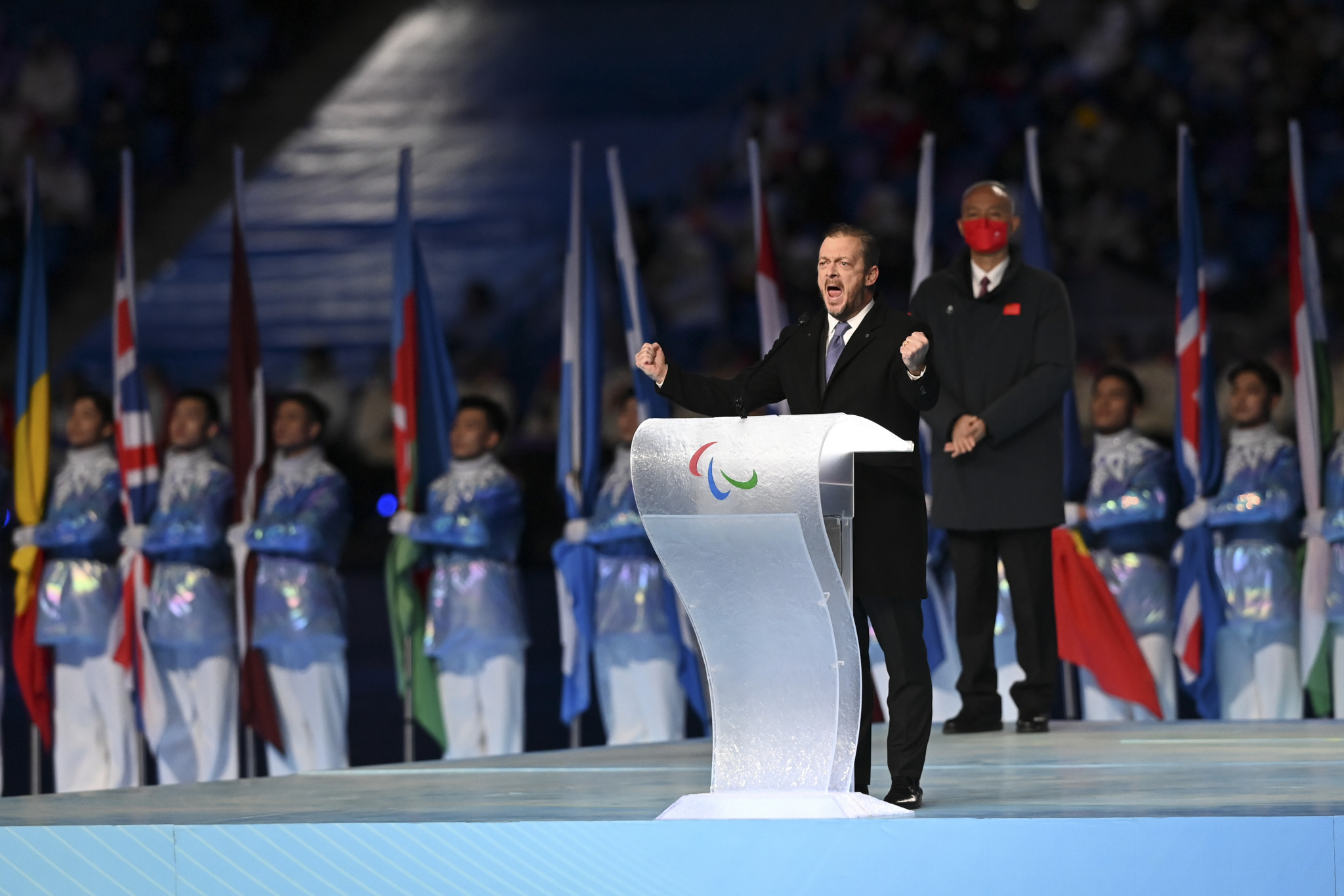 The International Paralympic Committee (IPC) has apologised after its President Andrew Parsons referred to Xi Jinping as "President of the Republic of China" during his speech at the Beijing 2022 Winter Paralympics Opening Ceremony.

During today's press conference at the Main Media Centre in the Chinese capital, IPC chief brand and communications officer Craig Spence insisted that Parsons was apologetic having made an honest mistake.

"As you will have noticed, during his speech, there was a slip of the tongue," Spence said.

"You all saw the speech, which was available on OIS [Olympic Information Service].

"He meant to say 'the People's Republic of China'.

"He was very emotional last night.

"[It was] a slip of the tongue and he mispronounced the opening line of the speech.

"He acknowledged his mistake as soon as he came off the stage and he'd like to express his apologies to all our tremendous hosts who have made us feel so welcome here.

"He apologises for the mistake."

Tensions between China and Taiwan have been growing, and spilled over into the sporting world during the Beijing 2022 Winter Olympics.

Beijing 2022 spokesperson Yan Jiarong claimed "there is only one China in the world" during a remarkable press conference on February 17.

Taiwan's Premier Su Tseng-chang also ordered an investigation into the speed skater Huang Yu-ting, after she was shown in a video to be wearing the national team's uniform in training for the Olympics.

The dispute over Taiwan's sovereignty is why athletes from the country compete as Chinese Taipei in the Olympics and Paralympics, after a compromise on the name was reached in 1984.

There were also reports from yesterday's Opening Ceremony including in the South China Morning Post that Chinese state broadcaster CCTV did not translate part of Parsons' speech which called for peace in light of the Russian invasion of Ukraine.

A video appeared to show the translation over Parsons' voice being brought to a halt after the IPC President had insisted that the Olympic Truce "must be respected and observed not violated".

The IPC said it "has asked for an official response from CCTV".

During his speech, the Brazilian official had said: "At the IPC we aspire to a better and more inclusive world, free from discrimination, free from hate, free from ignorance and free from conflict.

"Here in Beijing, Paralympic athletes from 46 different nations will compete with each other, not against each other.

"Through sport they will showcase the best of humanity and highlight the values that should underpin a peaceful and inclusive world.

"Paralympians know that an opponent does not have to be an enemy, and that united we can achieve more, much more."

This follows a report from British state broadcaster the BBC which claimed Chinese rights holders will not show Premier League football matches this weekend because of expressions of solidarity with Ukraine.

China and Russia are close allies, with Russian President Vladimir Putin invited to the Winter Olympics Opening Ceremony by his Chinese counterpart Xi.

China's Foreign Ministry has denied a New York Times report claiming it had asked Russia to delay its invasion until after the Games, branding it as "despicable".

Following the IPC's U-turn on Russian and Belarusian athletes, who have been banned from competing even as neutrals at Beijing 2022, Spence called for the sport at the Games to take centre stage.

"The athletes have trained for four years to be here.

"Let's turn over a new page, let sport be the focus, and let the athletes take centre stage now."

He also welcomed the RPC's statement, in which it said it would not appeal the ban at this stage having investigated the IPC Rules.

"They issued a statement saying they're not going to take legal action for now," Spence said.

"That ensures, from an IPC point of view, and I think for all of us, the focus is on sport.

"Let's focus on the athletes here."

"I have one word to describe it: wow," he commented.

"It was amazing. I would like to thank Mr Shen.

"It was absolutely remarkable.

"It was amazing to be back in the National Stadium, the Bird's Nest, because in 2008, when Hou Bin lit the flame for the Summer Games, it marked the start of a new chapter for the Paralympic movement and a real growth curve for us.

"We sincerely hope that these Games do for the Winter Games what the 2008 Games did for the Summer Games.

"It was really emotional for us to be back in the stadium last night."

The Beijing 2022 Winter Paralympics are due to run until March 13.

Ukraine lead the medal table after the conclusion of the medal events on the first day with three golds.