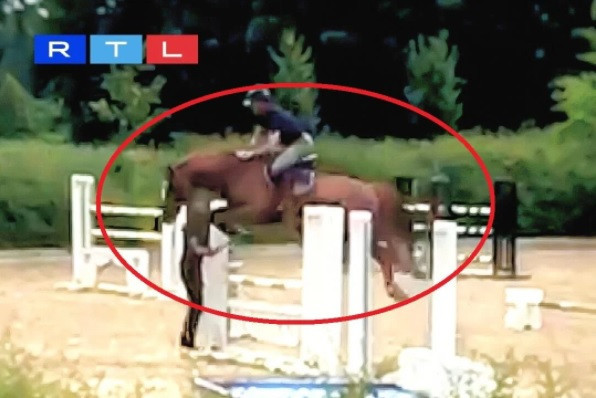 Pressure group People for the Ethical Treatment of Animals (PETA) has again called for equestrian events to be removed from the Olympic Games in response to footage which appears to show a German show jumper using a banned training method on horses.

It is prohibited by the International Equestrian Federation (FEI), which condemned the footage and said it was investigating.

PETA describes the practice as "cruel and likely illegal" and used the footage obtained by RTL as the basis for an urgent letter it has sent to International Olympic Committee (IOC) President Thomas Bach, where it calls for events involving horses to be axed from the Games.

The group made the same demand of the IOC back in August in the wake of the horse-abuse scandal in the riding section of the women's modern pentathlon event at the Tokyo 2020 Olympics.

"Whacking a horse's shins with a wooden rod to force him to jump higher is abuse - and it's apparently routine at the highest levels of this entertainment disguised as sport," said PETA senior vice-president Kathy Guillermo.

"PETA is calling on the IOC to keep all cruelty out of the Olympic Games and leave the competition to willing human participants only."

The FEI said in a statement this week that it was "making enquiries" following the footage shown by RTL.

"We are already in touch with the German National Federation and will continue to liaise closely with them in order to assess the appropriate course of action," the FEI said.

"The welfare of the horse is central to everything that the FEI stands for and we strongly condemn all training methods and practices that are contrary to horse welfare.

"The FEI has stringent rules in place to protect horse welfare which allow action to be taken both at FEI Events and elsewhere.

"The FEI absolutely condemns any form of horse abuse and the training methods shown in RTL’s video footage are totally unacceptable from a horse welfare perspective and against FEI regulations."

In a statement given to the German horse magazine St.GEORG, Beerbaum, who won three gold medals at Barcelona 1992 and one at Seoul 1988, appeared to confirm the footage was genuine but argued the practice was legal.

The 58-year-old has also said he will take legal action after describing the horse-abuse allegations as "demonstrably false".

"The contribution of RTL extra is demonstrably false, defamatory and in many ways slanderous," Ludger said.

"Of course we will take legal action against this.

"It is unacceptable that secret recordings were made on my private property.

"Only a horse that is properly treated, professionally cared for and fed, trained and managed can perform in sport.

"The horses are our capital that we take care of day in and day out."