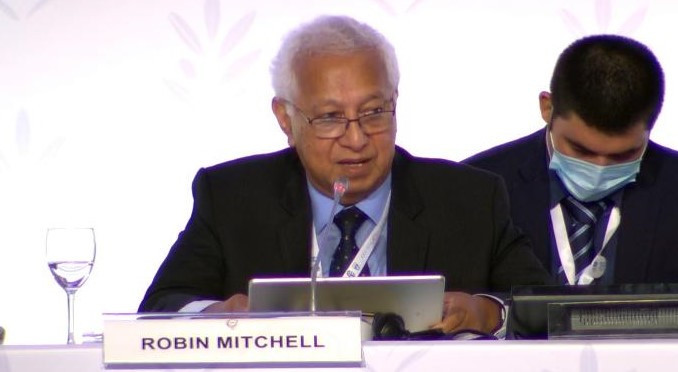 The Association of National Olympic Committees (ANOC) Acting President Robin Mitchell has praised the work of its 205 NOCs after their response to various challenges throughout the year.

In his end-of-year message, Mitchell looked back on what he described as "a truly extraordinary year" which provided "many unforgettable moments of joy and friendship".

"You, the NOCs, deserve great credit for the resilience you demonstrated and the commitment to supporting your athletes to ensure they could compete at their very best," the Fijian official said.

"This commitment to your athletes transcends the Olympic Games and has been seen throughout this year.

"The passion and dedication of the NOC family has inspired us and allowed your athletes to shine even during times of darkness.

"There have been countless example of NOCs working together in 2021 whether it is through shared sports facilities, vaccination hubs or simply the exchange of knowledge and best practice."

Mitchell highlighted the Tokyo 2020 Olympic Games and the ANOC General Assembly in Crete as two landmark events for NOCs this year.

He said that Tokyo 2020 had showcased "strength in unity", and thanked organisers in Japan and the International Olympic Committee for helping the delayed event be held "in a safe and secure manner".

A record-breaking 93 NOCs medalled at the Games, with 65 of those winning golds, and Mitchell said "Tokyo 2020 will go down in history as much for being a celebration of sporting excellence as it will as a celebration of humanity and solidarity".

Mitchell also offered his thanks to the Hellenic Olympic Committee for organising October's General Assembly, attended by 148 NOCs in-person with a further 57 joining online.

The gathering "provided a critical opportunity for NOCs to exchange ideas and best practice, to hear reports and contribute to our future", the ANOC Acting President said.

Mitchell referenced the ANOC Strategic Plan from 2021 to 2024, which was approved at the General Assembly, with initiatives including the Digital Accelerator Programme having already begun.

Turning to the future, he said he was confident that strict COVID-19 countermeasures in place at the Beijing 2022 Winter Olympics in February would not detract from the success of the Games, and he is looking forward to the ANOC General Assembly in Seoul from October 18 to 21.

"As we look to 2022, ANOC will continue to evolve to ensure it provides the best service to the NOCs," he said.

"Challenges remain and the pandemic shows no sign of going away but this year has reinforced how we can continue to progress and move forward when we work together.

"ANOC will continue to meet with the Continental Associations as we have this year to discuss new initiatives and learn from each other and our ANOC Commissions will continue to identify ways for ANOC to develop.

"We will also continue to progress in our preparations for the ANOC World Beach Games 2023 and the 2025 and 2027 editions."

Mitchell has served as ANOC Acting President since 2018 after Sheikh Ahmad Al-Fahad Al-Sabah was charged in Switzerland with forgery, and has announced his intention to run for the role on a permanent basis at the 2022 General Assembly.