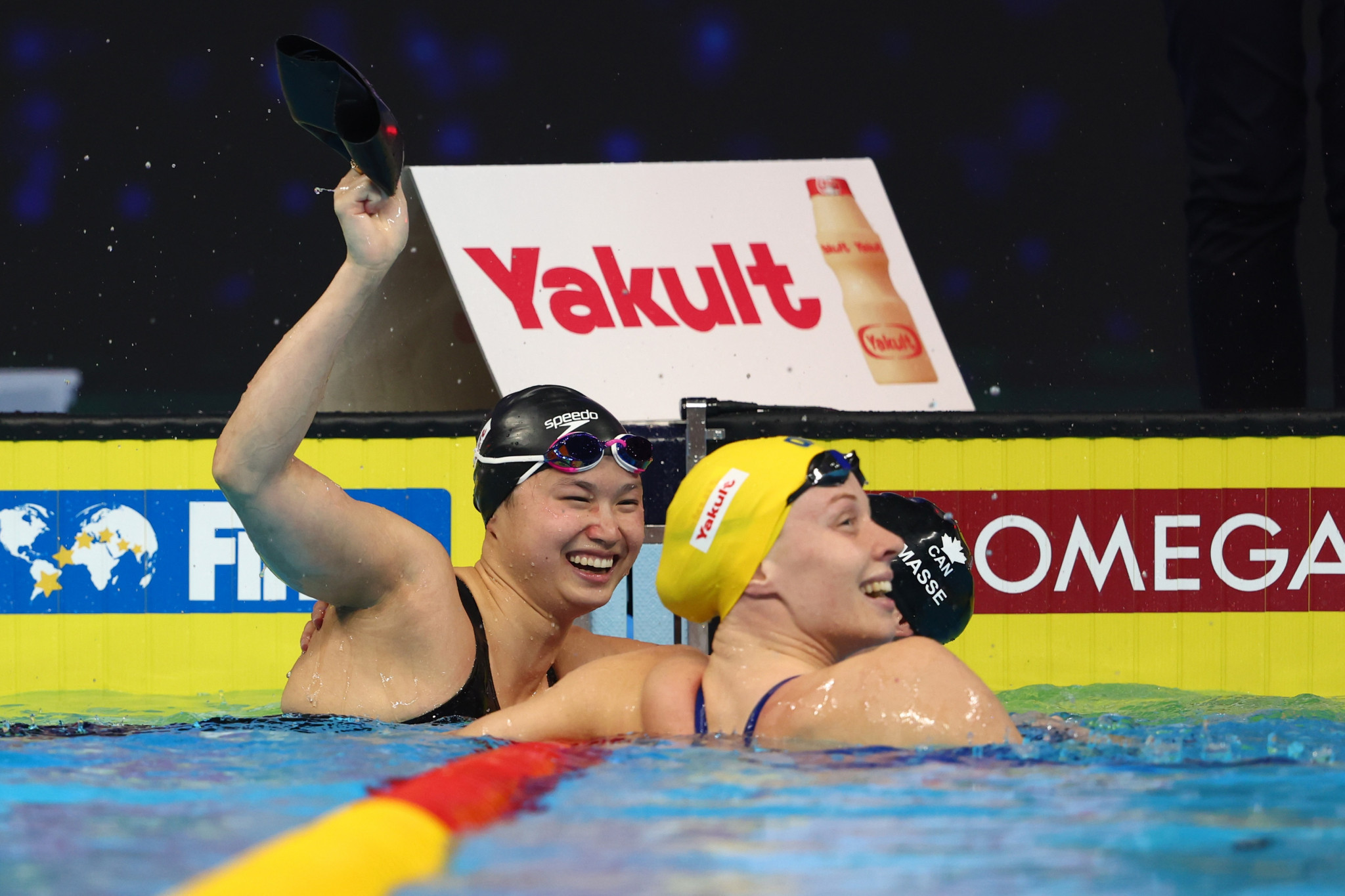 The Olympic champion was in a class of her own as she pulled clear of her rivals to clock a sensational time of 25.27sec.

Her world record broke the previous mark by 0.33, which was set by Dutch swimmer Kira Toussaint in 2020.

Sydney Pickrem clinched Canada’s first gold medal on a memorable night for the nation when she emerged victorious from a gripping women's 200m individual medley final.

Kate Douglass of the United States led the way but China’s Yu Yiting was in hot pursuit as she produced a strong backstroke leg.

Pickrem then launched her charge in the breaststroke as she overhauled Douglass and Yun to win in 2:04.29.

The Japanese star is world champion again, it's the 5th times in this event equalling the record by James Hickman (in the 200 Fly) #swimming pic.twitter.com/IUArDHdYUH

Canada completed the golden treble in the last race of the night when their women's 4x200m freestyle relay team triumphed.

Fresh from winning gold medals in the past two days, Li Bingjie put China into the lead with a strong opening leg ahead of Summer McIntosh.

Kayla Sanchez then took centre stage as she moved Canada ahead and Cheng Yujie touched in second for China.

Zhu Menghui looked to pile the pressure on Katerine Savard but the Canadian responded brilliantly as she increased her team's lead.

The US were also clawing their way back with Melanie Margalis getting the edge over Zhu.

Paige Madden gave her all in the final 100m as she managed to close the gap, but Rebecca Smith held on to win in 7:32.96.

Since winning his first crown in 2012, Seto has been unstoppable over the distance as she swept to a fifth successive title in dominant fashion.

Seto came storming out of the blocks as he established a lead over Carson Foster of the US and Ilia Borodin of the Russian Swimming Federation (RSF).

The Japanese man was almost 2sec ahead of nearest challenger Foster at the halfway stage.

He continued to increase his lead as Borodin and Foster battled it out for second spot before winning in 3:56.26.

At 41 years old, Santos - who made his World Swimming Championships debut in 2001 - continues to defy his age as he won the men's 50m butterfly title for the third time.

Dylan Carter of Trinidad and Tobago is 16 years younger than Santos but was unable to get the better of the veteran swimmer.

Santos was firing on all cylinders as he blasted to victory in 21.93, with Carter sealing silver in 21.98 and Italy's Matteo Rivolta bagging bronze in 22.02.

Tang Qianting of China maintained her form and composure to win the women's 100m breaststroke crown.

The 17-year-old Chinese swimmer made her intentions clear as she moved ahead of defending champion and world record holder Alia Atkinson of Jamaica as well as Sophie Hansson of Sweden.

She then found another gear to accelerate away from her rivals and secure victory in 1:03.92.

It's a new equalled Championships record and a share Gold Medal in the Men's 4x50 Medley Relay
TIME👉 1:30.51

Hansson held on for silver in 1:03.47, while Mona McSharry of Ireland came storming back to claim bronze in 1:03.92, nudging Atkinson out of the medal positions.

The RSF and the US shared the gold medal in the men's 4x50m medley relay after they both registered a championship record-equalling time.

Seeking a fourth gold at the World Championships, Kliment Kolesnikov put the RSF in front in the opening leg.

Nic Fink and Tom Shields helped the US move ahead of the RSF heading into the final leg.

Ryan Held tried to cling on to sole top spot, but the RSF joined the US after a gutsy performance from Andrei Minakov.

The US and the RSF both touched the wall in 1:30.51 – the same time Brazil clocked to set the championship record last month, while Italy claimed bronze in 1:30.78.

Russian athletes are competing as the RSF in Abu Dhabi, as part of sanctions imposed by the World Anti-Doping Agency against Russia in December 2018 in connection with the manipulation of data from the Moscow Laboratory.