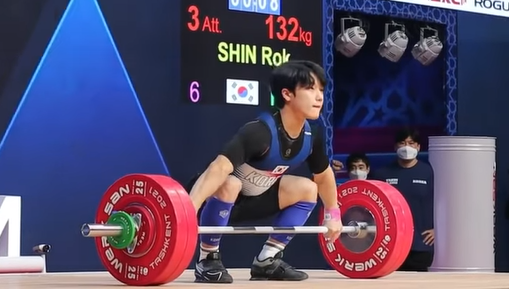 A 19-year-old South Korean claimed a senior world title and came close to breaking two world records on the third day of the International Weightlifting Federation (IWF) World Championships in Tashkent in Uzbekistan.

Shin Rok, who has only two totals and a bomb-out listed on the IWF results database, put in a remarkable performance in winning the 61 kilograms.

In making 132-156-288 Shin posted a career best by 21kg, and put up a total comparable to efforts made at the same age by China’s Li Fabin and Indonesia’s Yuli Eko Irawan, two of the very best lifters in the lighter categories.

He would have taken two junior world records had he finished off his final clean and jerk of 164kg.

Shin just failed so those records - the total held by Uzbekistan’s Adkhamjon Ergashev and the clean and jerk held by North Korea’s Kim Chung-guk - survived.

Some reports in the South Korean media before the World Championships highlighted the medal chances of others such as Kim Su-hyeon and Son Young-hee in the women’s 76kg and super-heavyweights, and Jin Yun-seong in the men’s 102kg - but not Shin.

Other newspapers, who dug deeper, rated his chances as Shin had broken national records and made a 294kg total in training.

His coach, Choi Jong-geun, predicted in advance that Shin would win gold.

Shota Mishvelidze of Georgia took the silver, 2kg behind Shin with 131-155-286, and third place went to Saudi Arabia’s Seraj Alsaleem, another 4kg back.

Mishvelidze and Alsaleem are respectively eight and six years older than Shin.

South Korea was also on the podium in the day’s other medal event, the women’s 55kg, but not on total.

Ham Eun-ji, seventh at the Tokyo 2020 Olympic Games - where Korea had two fourth-place finishers but no medals - took the clean and jerk silver on 114kg behind a B Group lifter who had earlier made the same number, Bindyarani Sorokhaibam of India.

Four of the top contenders failed with their final attempts.

Nigeria’s Adijat Olarinoye was in tears after missing her final clean and jerk at 115kg, which would have won her the gold on total.

Belkhir also failed on 115kg but she made the 203kg total first and took gold to add to her 2021 junior world title and 2018 Youth Olympic Games gold.

Svitlana Samuliak of Ukraine was third, making six from six and a total of 201kg.

In fifth, only one slot behind the best-ever placing by a British woman at the IWF World Championships, was 23-year-old Fraer Morrow who, despite missing her last two attempts, had a career best of 194kg.

In the concurrent Commonwealth Championships 16-year-old Tenishia Thornton of Malta, the youngest of the 432 competitors in Tashkent, made a total of 162kg to take the bronze medal behind Olarinoye and Sorokhaibam.