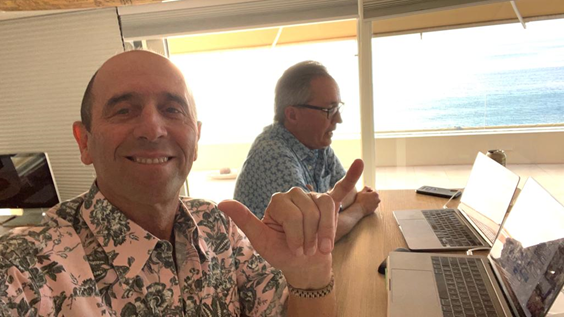 International Olympic Committee (IOC) member Coventry became an ISA vice-president in 2016, while Sierralta has completed three full terms having been elected for the first time back in 2008.

Coventry is an increasingly influential figure within the IOC having served as chair of the IOC Athletes' Commission from 2018 to 2021.

She became an individual IOC member earlier this year, after her eight-year term on the Athletes’ Commission came to an end.

The Peruvian has been a surfer and competitor since 1980.

The ISA said the election of the former Nippon Surfing Association coach highlights the value of international leaders to the governing body beyond Tokyo 2020, where Imoto had served as sports manager for surfing’s Olympic debut.

A governance change was approved, which will implement a three-term limit for all ISA Executive Committee members starting from 2022.

The ISA has also approved an increase in the number of delegates permitted to attend the AGM from two to three, provided one is a woman.

ISA President Aguerre has repeatedly stressed the sport’s long-term target remains full Olympic inclusion, with surfing having been included as an additional sport at Tokyo 2020 and Paris 2024.

The ISA has also targeted having stand-up paddling included in future Continental and Olympic Games.

"Following a historic year for surfing and the ISA with our hugely successful Olympic debut at Tokyo 2020, this was a very important Annual General Meeting to ensure we continue our journey of development and modernisation around the world," Aguerre said.

"The reform measures we have implemented in recent years, and the latest governance amendments today, highlight the ISA’s progress as an International Federation fit for purpose within the Olympic Movement.

"We are proud to demonstrate our ability and commitment to developing surfing globally, taking the sport to new parts of the world and ensuring we are open, inclusive and always operating with the greatest levels of integrity and transparency.

"At the same time I wish to thank our dear friend Atsushi Sakai for his exemplary service.

"The international sports leadership and experience of all these Executive Committee members are an asset to the ISA and I look forward to continuing our work together with them to promote and develop surfing globally for a better world for all."

The Ukraine Surfing Federation was confirmed as the ISA’s 109th member association at the meeting, while the global organisation’s membership approved the inclusion of the principles of non-discrimination of any form, gender equality, cultural tolerance and healthy living in the objectives of the ISA Constitution.

Reports from the ISA Athletes' Commission and Medical Commission were delivered, as well as reports on anti-doping, sustainability and development, including Para surfing.

A total of 42 voting and 16 non-voting ISA members attended the virtual meeting.