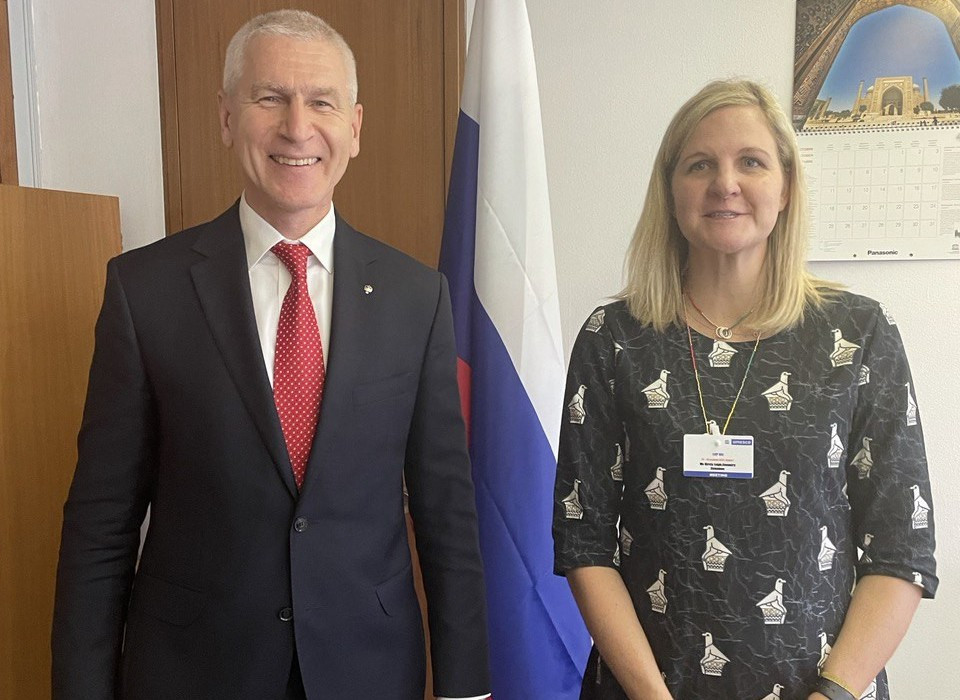 Russia's Minister of Sport Oleg Matytsin met with the President of the World Anti-Doping Agency (WADA) Witold Bańka, discussing the agenda of the eighth session of the Conference of Parties (COP8) to the United Nations Educational, Scientific and Cultural Organization (UNESCO) International Convention against Doping in Sport in Paris.

The Russian Anti-Doping Agency (RUSADA) was declared non-compliant by WADA in December 2019 after the country was found to have manipulated data at the Moscow Laboratory.

It had been reinstated in 2018 after an initial suspension in 2015.

The Russian name, flag and anthem was banned from World Championship and Olympic events under sanctions imposed by WADA and the country prohibited from bidding to host such competitions, although these were reduced from four to two year by the Court of Arbitration for Sport in December 2020.

WADA this month said it was "concerned with the sudden resignations of three Supervisory Board members, including the Chair [Tamara Shashikhina]" at RUSADA and vowed to investigate further.

The reinstatement process for RUSADA was discussed by Matytsin and Bańka today.

The Russian Minister of Sport also met with the deputy director general of UNESCO for social and human sciences, Gabriela Ramos, and the Zimbabwean Minister of Youth, Sports, Arts and Leisure Kirsty Coventry.

As per the Russian state news agency TASS, Matytsin said in advance of the session in Paris he believed the event should serve to help countries tackle doping issues.

"The convention should be aimed at uniting countries," he said.

"We will do everything necessary to remove the sanctions mechanism from the provisions of the convention, and all efforts were aimed at helping states that experience difficulties in organising anti-doping systems."

More than 30 Sports Ministers or other senior officials were in Paris for the first day of the COP8 at UNESCO's headquarters, with the opening of the session followed by a forum and an information session.

Bańka addressed those present, stressing the importance of collaboration between COP8, UNESCO and Governments across the world.

"From the outset, WADA, UNESCO and Governments have been partners," he said.

"We are connected by a common mission.

"WADA oversees the World Anti-Doping Code while UNESCO is the custodian of the Convention which Governments commit to uphold.

"Governments are responsible for fulfilling the requirements of the Convention and they must be held to account for the commitments they have made in this regard.

"However, today there is no strong process under the Convention where Governments face consequences if they do not comply."

The WADA President claimed the importance of Governments "cannot be overestimated," and that a lack of a "real penalty for Governments that choose not to play by the rules" remained "a weak link in the system."

"Governments should face consequences if they do not deliver on the promises they made," Bańka added.

Moreover, Bańka called for greater funding for anti-doping initaitves from sources other than Governments and the sports movement, "mainly from the private sector, to assist in the protection of clean sport."

Matytsin was also among the speakers at COP8, and he welcomed the opportunity for global cooperation on anti-doping provided by the session.

"It is unacceptable to erode the existing international anti-doping legislation through the adoption of national acts given an extraterritorial character," he said.

"This way of unilateral imposition of their own and, what is more, unequal rules lead to stalemate.

"The possible alternative would be the further development of the multilateral intergovernmental anti-doping institutions.

"First of all, we are talking about the Conference of Parties to the UNESCO Anti-Doping Convention, which is by right the leading intergovernmental platform in the fight for the purity of sport."

In December 2020, the United States Congress passed the Rodchenkov Anti-Doping Act into law, giving the country the ability to prosecute individuals for doping schemes at international sports competitions where American athletes, broadcasters and sponsors are present.

However, WADA expressed fears this would hamper cooperation between nations.

Matytsin emphasised that he believes the UNESCO International Convention against Doping in Sport offers an important means of support to help countries tackle doping.

"The problem of doping has no nationality and no state borders," he added.

"It is necessary to move from the language of ultimatums and sanctions to an equal dialogue to consider any issues.

"The path of sanctions is a one-way road, where everyone loses, and sports take a lot of losses.

"We are convinced that such restrictions in relation to sovereign states are unacceptable and impossible both from a legal point of view and from the point of view of common sense.

"Thanks to the coordinated work of the representatives of the states of the Convention, it was possible to reorient the approach - from a repressive mechanism to assistance and support to states experiencing difficulties in implementing the provisions of the Convention."

Tomorrow and Thursday (October 28), the session will focus on progress made since COP7 in 2019 and develop proposals that seek to enable the implementation of the International Convention against Doping in Sport, which was introduced in February 2007.

Elections of a chairperson, vice-chairpersons and rapporteur of the COP8 Bureau will also be held tomorrow.