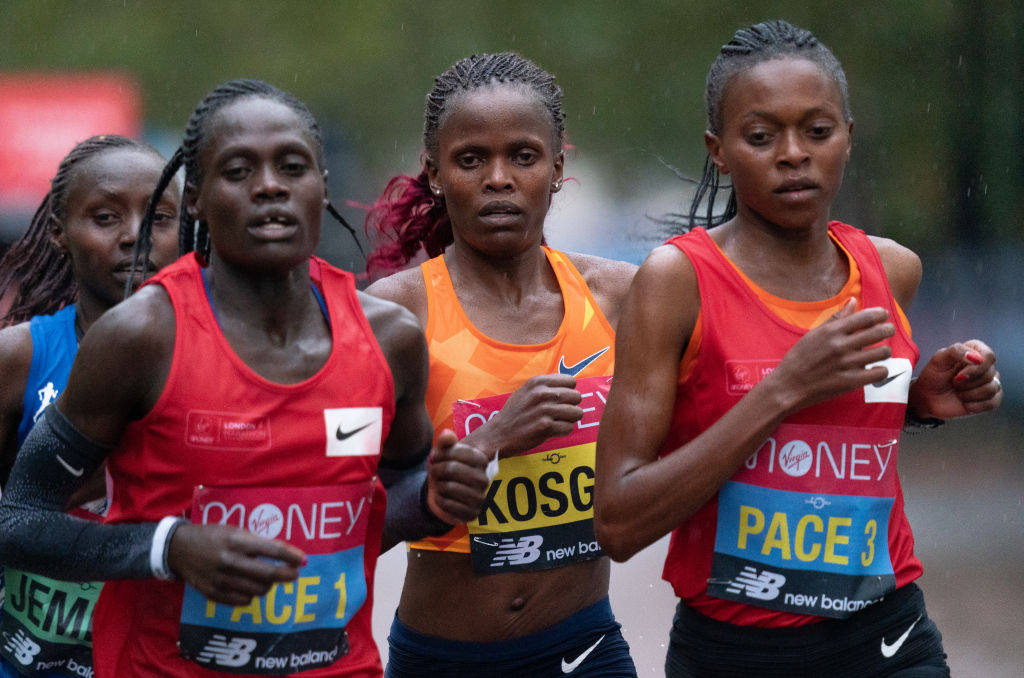 The London Marathon returns tomorrow to its traditional course from Greenwich to The Mall, with spectators in attendance at what event director Hugh Brasher says will be the most competitive marathon ever seen.

If previous fast times were all it took to win major city marathons, you would be looking at Ethiopia’s Birhanu Legese - running his first London - and Kenya’s world record holder Brigid Kosgei as the likely winners of 41st edition of this landmark occasion.

The 27-year-old Ethiopian’s personal best of 2hr 02min 48sec, set in finishing second to compatriot Kenenisa Bekele at the 2019 Berlin Marathon, puts him third on an all-time list headed by the absent Kenyan Eliud Kipchoge, whose official world record stands at 2hr 01min 39sec, set in winning the 2018 Berlin Marathon.

Legess’s personal best is just 11 seconds slower than the London course record of 2:02:37 set by Kipchoge in earning his fourth London title in 2019, and he willingly took on board the suggestion that he would be looking at that time tomorrow.

"lt depends on the weather on the day, but if the weather is good I plan to break the course record and that’s my target and I have prepared for that," he said on Wednesday.

Legese knows how to win a big city marathon – he has twice earned victory in Tokyo, although his hopes of competing at the Tokyo 2020 Olympics were ended by an injury that prevented him from taking part in the Ethiopian trials.

His compatriot Shura Kitata also knows how to win - and how to win in London - which he did last year against a field that included Kipchoge and on a closed, looped course within St James’s Park that enabled the event to proceed within COVID-19 protocols.

Kitata, however, was a more cautious figure at last week’s elite men’s press conference, saying: "I have some leg problems but I am still preparing and looking forward to the race."

He added that a hamstring injury two weeks before the Tokyo 2020 Games was "a big problem" and had undermined his preparations for a race where he had to drop out after 10 kilometres.

"I have prepared well for the London marathon though and I am now feeling ready to run," said Kitata, who finished second in the capital in 2018 and fourth in 2019.

Asked if he was now clear of his hamstring trouble, he responded: "Hamstring pain is not really easy and when it’s a very fast speed there might be some problem.

Last year, in driving wind and rain, Kitata – who has a best of 2:04:49 - sprinted clear of Kenya’s Vincent Kipchumba in the closing stages.

Kipchumba will be a threat again, although he has yet to break 2:05.

Legese is one of six men in the field who have bettered 2:04.

Ethiopia’s hopes will also lie with the hugely consistent Mosinet Geremew, whose second place behind Kipchoge in the 2019 London marathon was secured in 2:02:55, making him the fourth fastest of all time.

Meanwhile, Tokyo 2020 bronze medallist Bashir Ali of Belgium will be another leading contender.

The big question regarding Kosgei’s hopes of becoming only the second runner to win three women’s titles in a row at London since Germany’s Katrin Dorre between 1992 and 1994 is how much has winning silver at the Tokyo 2020 Olympics, where she finished 16 seconds adrift of compatriot Peres Jepchirchir, taken out of her.

It was not entirely clear from her press conference as she began by saying how "very tired" she was after Tokyo but added her training was going well and she was "ready" to win again.

Adding to the confusion, she appeared not to confirm that the women-only race world record of 2:17:01, set at the 2017 London Marathon by the recently retired fellow Kenyan Mary Keitany, would be a target.

One of her main rivals will be compatriot Joyciline Jepkosgei, the former half marathon world record holder who stepped up to the marathon with immediate effect by winning the 2019 New York race.

Jepkosgei, who set a marathon personal best of 2:18:40 in finishing second at last year’s race in Valencia, won the Berlin Half Marathon on August 22 in a course record of 65min 16sec.

"That was the perfect preparation for the London Marathon," said Jepkosgei, who will be making her debut in the event having taken part as a pacemaker in 2019.

Also in attendance was Ethiopia’s Berhane Dibaba, who set a personal best of 2:18:35 last year in earning a third win in Tokyo, where she has also been runner-up twice.

This will be Dibaba’s second London Marathon race – she came ninth on her debut in 2019.

"I am well prepared and I have come to win the race, although it will be very tough," she said.

Israel’s Lonah Salpeter is the next fastest in the field with a personal best of 2:17:45.

Salpeter set that time winning last year’s Tokyo Marathon, but her hopes of earning a medal at the Tokyo 2020 Games were undermined by what she said had been menstrual cramps which forced her to drop out of the leading group with just four kilometres to go - she eventually finished 66th.

Will the memory of that unfortunate circumstance super-charge her London effort?

Roza Dereje of Ethiopia, who missed an Olympic medal by one place in Tokyo, is another who may feel she has something to prove in London.

Dereje has also run under 2:20, as have her compatriots Degitu Azimeraw, Zeineba Yimer and Tigist Girma as well as Kenya’s Valary Jemeli.

Australia’s Sinead Diver, who, at 44, finished 10th in the Tokyo Olympic Marathon and has two top-10 finishes in the past two London Marathons, is another to look out for.

Diver is a training partner of Charlotte Purdue, who is the fastest female Briton in the field and will be hoping to qualify for a spot on the British team for the World Athletics Championships in Oregon in 2022.

She also has a point to prove, having felt the British Athletics "threw her under the bus" by not selecting her for the Tokyo 2020 Olympics as they didn’t feel she had securely recovered from an injury.

Manuela Schär, fresh from winning the women's wheelchair race at the Berlin Marathon, is set on adding a further title in London when she faces a field including the athlete who narrowly beat her in last year’s race, Nikita den Boer of The Netherlands.

The men's race will see double Paralympic champion Marcel Hug of Switzerland taken on his longtime rival, Britain's London 2012 wheelchair marathon winner David Weir, in a race that will also see the return of the 2019 winner, Daniel Romanchuk of the United States, as Brent Lakatos of Canada defends his title.

Weir, 42, will be making his 22nd consecutive appearance in the London Marathon wheelchair race and, having missed out to Lakatos by two seconds last year, will be seeking a ninth win.