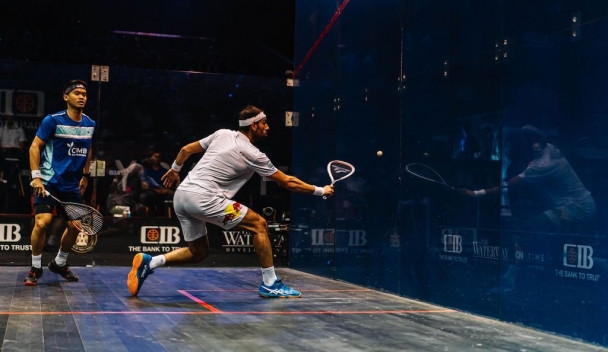 There were no upsets on the first day of quarter-final action at the Giza Pyramid Complex as the top and third seeds in both the men’s and women’s Egyptian Open draws progressed to the last four.

The women’s competition saw world number one and defending champion Nour El Sherbini reach the semi-finals on home soil with a comfortable win against her compatriot Farida Mohamed.

El Sherbini dominated the contest against the world number 34, winning 11-2, 11-4, 11-4 and will next play France’s Camille Serme.

The third seed and world number four was challenged by Egypt’s eighth seed Rowan Elaraby in the first game of their quarter-final, which went to a tiebreak, but Serme did not look back from the moment she edged that 12-10, going on to record 11-3 and 11-2 wins in the following two games to ease through.

El Sherbini was pleased with how she performed and is expecting a tricky test against Serme.

"I haven’t played Camille a lot this season, we actually only played once.

"I’m sure it’s going to be a tough battle, we always do have very tough matches and I think it’s the first between us in a Platinum semi-final event, so I’m looking forward to this one and keen to get back on court."

The host nation is guaranteed at least one player in the men’s final as Mohamed ElShorbagy and Tarek Momen won their quarter-finals to set up a last-four meeting.

The world number two and top seed ElShorbagy is featuring at this competition for the first time since 2016, and was on top form as he recorded a straigh- games triumph against Malaysia’s Eain Yow Ng.

"This is the most iconic tournament we have in Egypt," ElShorbagy said.

"To be back here playing the semis, I’m really proud to come back and make it that far but we’re getting into the most important part of the tournament now, the later stages.

"That’s when most of the top guys raise their level and I expect that of myself in two days."

Former world champion, third seed and world number four Momen had to come from behind to beat his compatriot Zahed Salem.

Salem, ranked 15th in the world, saved two game balls before clinching the first game 12-10, but Momen recorded 11-4, 11-5 and 11-2 victories in the following three games to make the semi-finals.

The quarter-finals in the bottom half of the draw are to be held tomorrow.

Egypt’s world number one Ali Farag takes on his compatriot Mazen Hesham and the fourth and fifth seeds Paul Coll of New Zealand and the hosts’ Marwan ElShorbagy clash in the men’s draw.