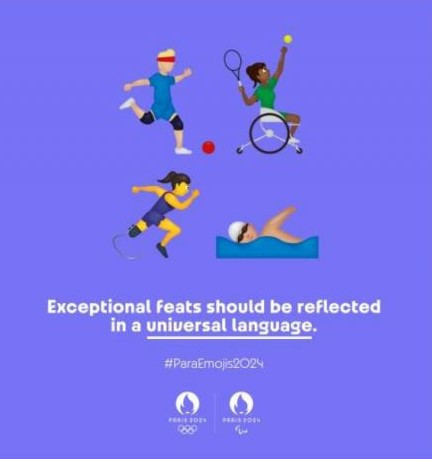 Paris 2024 has officially submitted a request to include Paralympic sports to the emoji language ensuring a further representation of the disabled community.

The proposal has been endorsed by many high-profile athletes all around the world, as well as the International Paralympic Committee and the French Paralympic and Sports Committee (CNPSF).

A request has now been submitted to the Unicode Consortium requesting the addition of four Para sport emojis to this now-universal language.

The California-based Consortium is a non-profit corporation devoted to developing, maintaining, and promoting software internationalisation standards and data.

Athletics, blind football, swimming and wheelchair tennis are the four sports that Paris 2024 has put forward.

Paris 2024 had officially launched the campaign on December 3 last year - International Day of Persons with Disabilities.

Emojis are now an essential part of everyday communication worldwide.

In recent years they have become increasingly representative of society, integrating different skin tones and hair colours, as well as people with disabilities, although Paralympic sport has still to be included.

"Paris 2024 is convinced that sport can be a powerful driver of social inclusion, self-acceptance and openness to others," Paris 2024 President Tony Estanguet said.

"It’s crucial that our incredible champions with disabilities are represented in this universal language."

The emoji project reflects the commitment of Paris 2024 to bring the same level of ambition to the Olympic and Paralympic Games, with the same spectacular venues and, for the first time, a common emblem across both Games, French organisers claim.

Paris 2024 is calling on people around the world to get behind the initiative by showing their support on social media with the hashtag #ParaEmojis2024.

Before Paris 2024, the Spanish Paralympic Committee had already launched a campaign calling for Paralympic emojis which received more than 400,000 signatures.