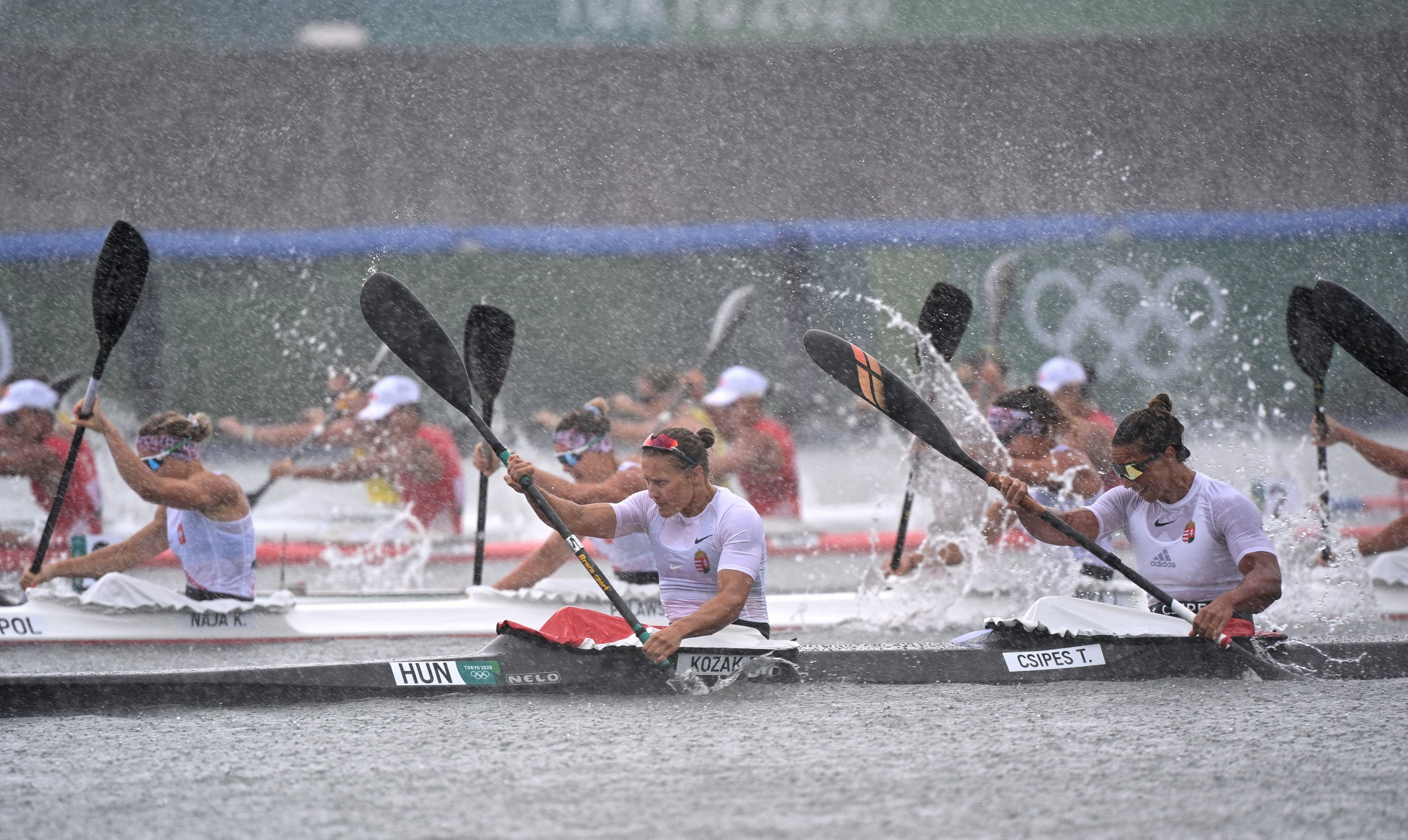 The 34-year-old Hungarian had already lost two of her Olympic crowns to Carrington in the Japanese capital as the New Zealander clinched the women’s K1 500m and K2 500m titles.

Having also topped the podium in the K1 200m, Carrington was looking to make history by becoming the first flatwater canoeist to win four golds at the same Games.

But Kozák dashed Carrington’s hopes as she teamed up with Tamara Csipes, Anna Kárász and Dóra Bodonyi to triumph in the K4 500m final.

Even heavy rain could not stop the Hungarian quartet as they clinched victory in 1min 35.463sec, while the New Zealand crew finished outside the medals.

Hungary had to come from behind as Belarus made a strong start, with Australia and New Zealand following in second and third respectively.

Belarus stretched their lead to four metres at the halfway point, but Hungary were on the charge and soon took the lead.

Hungary held strong to cross the finish line first, with Belarus taking silver in 1:36.073 and Poland claiming bronze in 1:36.445.

Max Rendschmidt captured the third gold medal of his career after being part of the German team that emerged victorious in a enthralling men’s K4 500m final.

The 27-year-old, a two-time gold medallist at Rio 2016, joined forces with Ronald Rauhe, Tom Liebscher and Max Lemke to secure the title here.

Germany were the three-time world champions in the event making its Olympic debut, but they had to come from behind to win.

Spain led Germany by almost 30 seconds at the halfway point as they looked to power clear.

But Germany clawed their way back as the two crews battled for top spot, with the lead often changing hands in the closing stages.

Xu Shixiao and Sun Mengya of China become the first-ever Olympic gold medallists in the women's C2 500m with a dominant display.

The Chinese duo were already the world champions in the discipline, and have now added an Olympic crown to their resume.

They stamped their authority early on with Ukraine and Germany chasing and secured victory in an Olympic record time of 1:55.495.

Isaquias Queiroz of Brazil bounced back from the disappointment of coming second at Rio 2016 to win gold in the men's C1 1000m at Tokyo 2020.

With two-time champion Sebastian Brendel failing to qualify from the semi-finals, Queiroz seized his opportunity.

Lui Hao of China moved out in front in the first half of the race before Queiroz started motoring.

The Moldovan was hit with a four-year suspension by the International Canoe Federation five years ago after a pre-event test uncovered the presence of banned substance GHRP-2.

It resulted in Tarnovschi losing the bronze medal he won after finishing third in the men’s C1 1000m canoe sprint event at Rio 2016.

At the time, Tarnovschi claimed he accidentally consumed the prohibited substance from a contaminated supplement but his appeal was dismissed by the Court of Arbitration for Sport in 2017.

The 12-month delay to Tokyo 2020 due to the coronavirus pandemic has allowed the 23-year-old to serve out his four-year ban, return to racing, win a C1 1,000m quota place and secure a place on the podium.