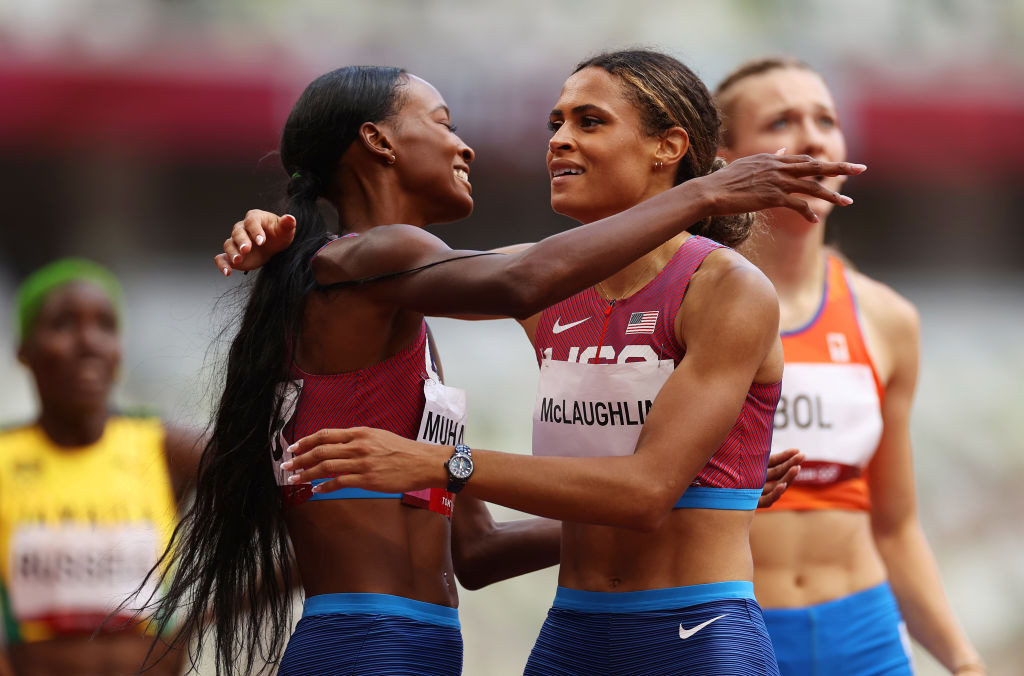 America's Sydney McLaughlin took a huge chunk out of her own world record at Tokyo 2020 here as she clocked 51.46sec to win an Olympic women’s 400 metres hurdles final that delivered a competitive spectacle to rival the previous day’s men’s version it so strangely resembled.

The 21-year-old’s fellow American Dalilah Muhammad made a committed defence of her title before settling for silver in a huge personal best of 51.58 - well inside the world record of 51.90 McLaughlin ran at the United States Olympic trials.

Meanwhile Femke Bol, 21, of The Netherlands, never quite in touch with the US rivals, chased them home to earn bronze in a European record of 52.03.

That mark eclipsed the then world record of 52.34 set by Yulia Pechonkina of Russia in 2003.

All three medallists now occupy the first three places in the all-time list of performances in this event.

The parallels with the previous day's men's 400m hurdles final were extraordinary as the previous world record was beaten by both the gold and silver medallist, with the bronze medallist finishing close to it.

If the level of reduction of the world record did not quite match up - Karsten Warholm reduced his own mark from 46.70 to 45.94sec - it was still a landmark race in an athletics programme that has delivered extraordinary spectacles day after day to a largely empty new stadium.

Muhammad, whose previous best was the world record of 52.16 she set in holding off McLaughlin’s challenge at the 2019 World Championships in Doha, went off hard and led through the first half of the race.

But as the field turned into the straight her inexorable young rival drew level and then moved ahead over the final hurdle to claim what will surely be the first of many global titles.

"What a great race.

"I saw Dalilah ahead of me with one to go and I just thought 'Run your race'.

"I just wanted to go out there and give it everything I had.

Asked to assess the huge amount she had taken off the world record, she responded: "I can't really [get] it straight in my head yet.

"I'm sure I'll process it and celebrate later."

Muhammad admitted that, until the 10th and final set of hurdles, she was beginning to think she had the race won.

"Every question is going to be, 'Am I happy or am I unhappy with silver?'” she said.

"But that's not how I feel at all.

"I've had an amazing year and to finish with 51.5(8), shattering my personal best, is absolutely amazing.

"Just like the men's race, all three of our times would have won any Olympics, any other year.

"I'm so proud to be part of that history and even more proud of my teammate Sydney.

"I'm just happy it's a one-two final for USA, and today I'm happy with second.

"After the ninth hurdle, I thought, 'I'm about to win this.'

"That was not the case, but I knew I had to take it out.

"I was in lane seven, so I thought, why not?

"Maybe I'll be able to pull off a Karsten and lead from start to finish.

"That wasn't to be, but I gave it everything I had, and I'm happy with it."

Speaking about the European record, Bol commented: "I knew it was close and if I wanted to break it, it would be today.

"The race was perfect, the weather was great and I'm in great shape, so I'm so happy.

"It's great when you have people in the last straight because it pushes you to keep going.

"I didn't quite get my rhythm but in my head I could keep pushing because I had people I could chase. It was amazing.

"I saw Karsten Warholm yesterday and he said, 'Okay, go out first', and that was my plan.

"What he does is amazing and it's great to see 400m hurdles at such a high level.

"That I can be part of it makes it even better."

The race generated two other personal bests as Janvieve Russell of Jamaica finished fourth in 53.08 and Ukraine’s Viktoriya Tkachuk sixth in 53.79.