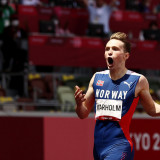 Norway’s Karsten Warholm won one of the great Olympic finals here today to claim men’s 400 metres hurdles gold, taking almost a second off his own world record as he finished ahead of his United States rival Rai Benjamin in 45.94sec.

All of the 25-year-old double world champion’s strength from a multi-events background was employed around the final bend and down the finishing straight as he held off his 24-year-old opponent, who finished with silver in an Americas record of 46.17, well inside the world record of 46.70 set by Warholm in Oslo last month.

The towering spectacle followed the opening final of the day when a last-round effort of 7.00 metres won the women’s long jump title for Germany’s world champion Malaika Mihambo.

Before the final hurdle Warholm seemed to gather himself before redoubling his effort and driving for the line to become the first sub-46sec performer in his event, with Benjamin unable to match his strength and desire.

Finally, the young man from Ulsteinvik who took up this event as a 20-year-old in 2016 had it all.

No wonder he looked as if he was struggling with his emotions in the aftermath of a historic race in which bronze went to 21-year-old Alison Dos Santos in a South American record of 46.72, with Kyron McMaster of the British Virgin Islands fourth in a national record of 47.08.

In fifth place, in 47.12, was Qatar's world bronze medallist Abderrahman Samba, who dominated the 2018 season, inflicting defeat after defeat upon the bemused but determined Warholm, who never hid once.

It had taken almost 29 years for Kevin Young's world record of 46.78, set in winning the 1992 Olympic title in Barcelona, to be broken – and now Warholm has taken his event into new territory.

"It’s by far the biggest moment of my life.

"I didn’t touch one hurdle.

"I was even able to find another gear coming home, so ‘Wow’.

"It was the only thing missing from my collection.

"The Olympic gold medal is what everybody talks about.

"I knew this race was going to be the toughest of my life, but I was ready.

"It defines everything, all the hours I put in, everything that my coach, Leif Olav Alnes, has been working for."

Warholm readily admitted how he had become obsessed with achieving this ultimate ambition.

"I dream about it like a maniac, I tell you," he said.

"I spend all my time thinking about this, so just getting this last medal into my collection, it’s complete.

"I can’t sleep, I’ve spent thousands of hours thinking about this.

"I had this special feeling in my chest, you know when you are nervous?

"I was just thinking this is the feeling that I had when I was six-years-old.

"I’ve never had that feeling since I got older, but yesterday I had it."

Benjamin was unequivocal about the race in which he had just been involved: "I would say this was probably the best race ever in Olympic history,'" he said at the press conference.

"I don’t think any other race compares with what we just did about two hours ago.

"There is nothing you can compare to what just happened out there.

Speaking after the race, he said: Knowing that you want to be the best, this is what it costs.

"Right now I just want to spend some time with my family.

"It’s my first Olympics and I made some mistakes that cost me.

Until Mihambo’s late flourish the women’s long jump title appeared to be returning to the 34-year-old American athlete won who it at London 2012 and came within two centimetres of doing it again at the Rio 2016 Games, Brittney Reese.

The four-times world champion peaked in the third round with an effort of 6.97m, which matched the first-round lead set by Nigeria’s Ese Brume, back in action after a serious knee injury in April, and took her into gold-medal position through a superior second-best effort.

Mihambo, meanwhile, held bronze position with her second round effort of 6.95m - but there was more to come.

Rio 2106 bronze medallist Ivana Španović of Serbia strove to get into the medal positions, but had to settle for fourth place with a best of 6.91m, ahead of Ukraine’s 2019 world silver medallist Maryna Bekh-Romanchuk, who reached 6.88m.

But she could not match the fluid brilliance of the 27-year-old German, who had already indicated her ability to perform at the heights under pressure in winning the 2019 world title with an effort of 7.30m and who produced her final flourish after big fouls in her fourth and fifth rounds.

“It was, I think, the most exciting women’s long jump competition in history.

"It was so exciting to be part of and I am happy I made it at the end.

"I just needed to hit the board.

"I knew all the time that I could do it. I just knew that I had one last attempt to do it and I am so happy to grab the gold.

"There was pressure, but sometimes it's easier for me to deliver under pressure.

"I was thinking that it was a funny coincidence that I had the same result with 6.95m as in Rio.

"But I knew that last time it was my best that I could give in that moment.

"Today I knew I can do more and better, so I was really longing for this last chance to show that there's more in me than 6.95."