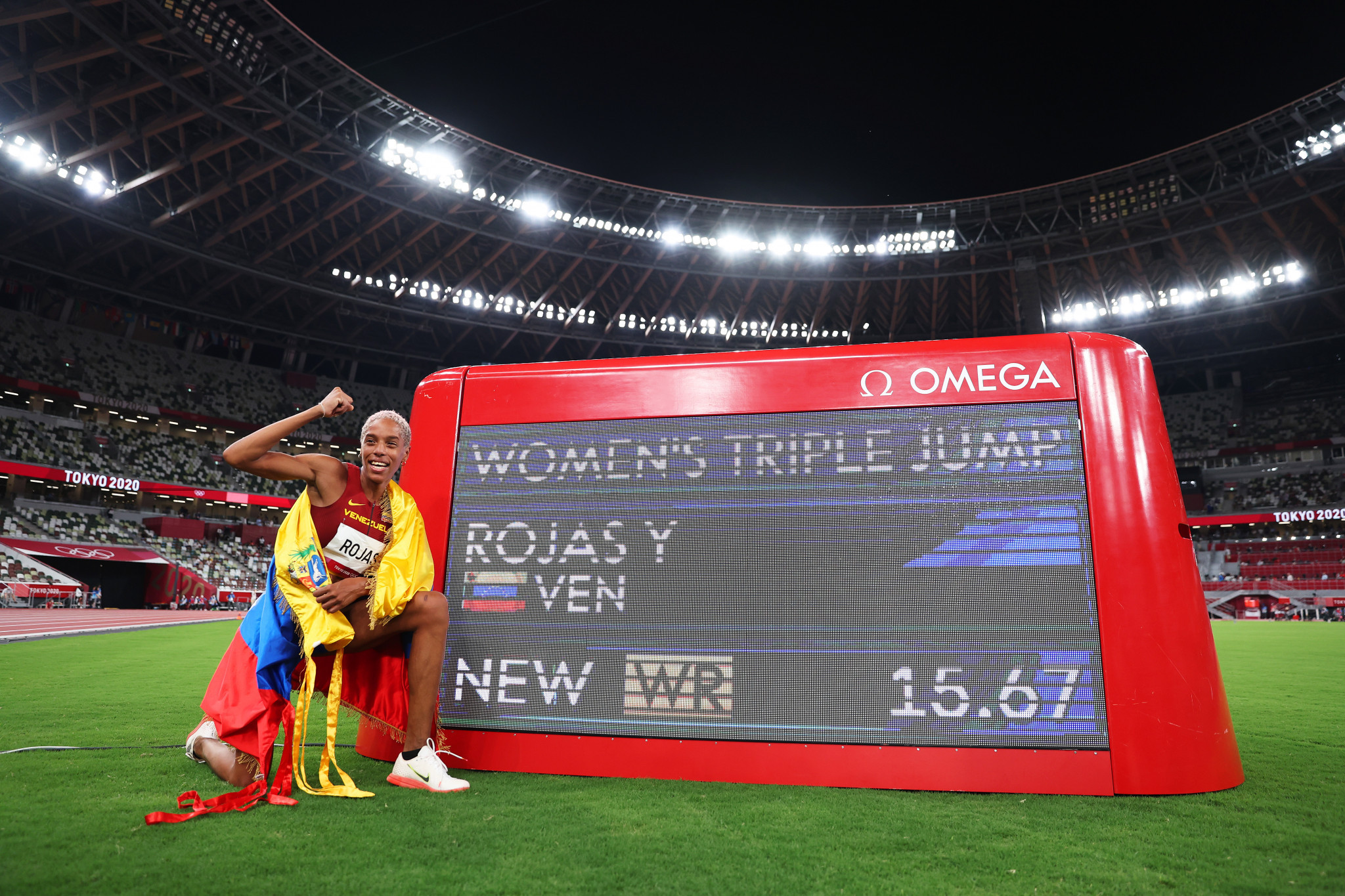 The 25-year-old double world champion, already assured of gold, put everything together on her sixth and final jump, landing in the sand at 15.67 metres and thus surpassing the mark of 15.50m set by Inessa Kravets of Ukraine in winning the 1995 world title in Gothenburg.

Even the normally exuberant, hyperactive Rojas, who took silver at the Rio 2016 Games, was momentarily overcome by the immensity of her achievement.

The evidence of her twofold ambition tonight was clear from her measured reaction to an opening effort of 15.41m, which effectively decided a contest in which silver went to Portugal's Patricia Mamona, who produced a national record jump of 15.01m.

Midway through the competition, Rojas looked a little frustrated and went straight over for an urgent discussion with her coach.

Two rounds later, she was dancing in excitement after landing in what looked very much like world record territory – only for a red flag to quell her rising triumph.

Her fourth effort was 15.25m, hardly enough to raise a smile.

But after another foul, her final effort offered a dream-like finish to her labours.

“From the run I knew that I couldn’t miss (the world record)." Rojas said.

“It was on my hand, and I just had to fix some details.

“Landing, we already know when a jump is good.

“Hearing the roar from the tribune, hearing my teammates’ shouts was incredible.

"I didn’t have to look, because, my mind, my body, and my soul knew that I had made it.

“Since I woke up today I knew that it was going to be a great day.

"I felt that magic, that good energy that things could be huge, and I could make history.

"The start was brutal, I felt very good from the first jump.

"I had the strategy set up with Ivan, that was trying to get the gold medal in the first jump.

“I was a bit angry (during the following attempts), because everything was going well, but I couldn’t get the distance I wanted.

"But in the sixth jump I made it.”

"She deserves it, I knew she was capable of doing it.

"I didn’t have doubts that she was going to get it (the world record) here.

"I shouted to her before the last jump, because I knew that would help her.

"I am very happy for her and Ivan."

Silver medallist Mamona said afterwards she "took some of Rojas’s energy" for herself, adding: "I'm in the clouds right now.

"I dreamed about it but everybody dreams about it.

"I knew that I had to work incredibly hard to achieve something like this.

"This season, everything happened to me.

"I had Covid, then I had my first big injury."

Shaniecka Ricketts of Jamaica was fourth on 14.84m, ahead of Cuba’s Liadagmis Povea on 14.70m and Israel’s Hanna Minenko on 14.60.