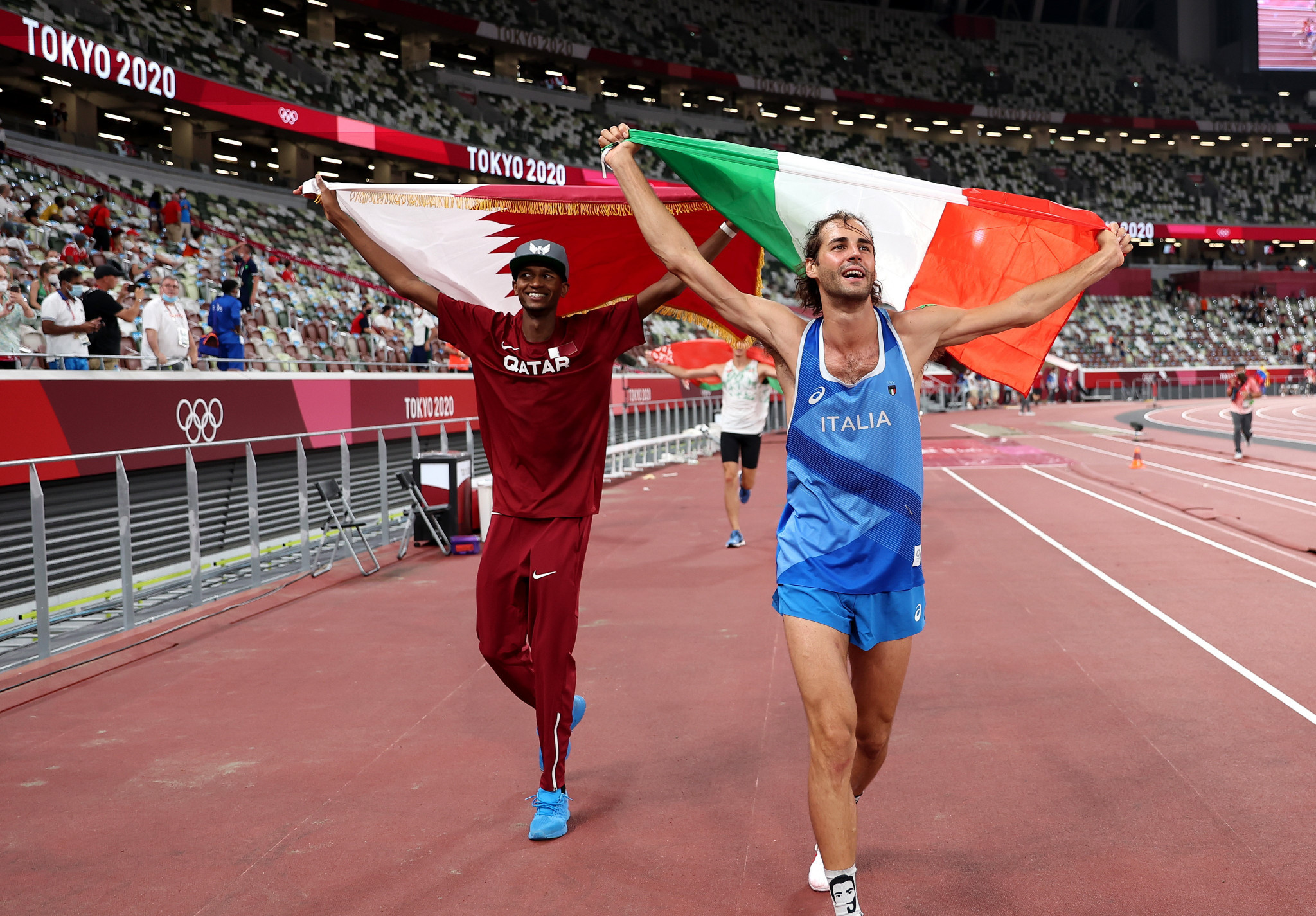 In one of the most beautiful of sporting moments, two men decided to share an Olympic title here tonight.

So closely had Qatar’s world champion Mutaz Barshim and Italy’s Gianmarco Tamberi tracked each other throughout a compelling high jump contest, each clearing 2.37 metres without blemish before failing at 2.39m, that the decision seemed entirely fitting.

At the end of a long, intense competition in steamy conditions the idea that one or other would have to settle for less than his due in an attritional extra round or two working back down the heights was anathema.

The discussion that preceded the sudden end of a high jump event that had been dominated from the start by the two eventual winners was brief.

The conversation went like Barshim asking if they could have two golds and being told it "is possible" by an official.

At which point Barshim grinned, and nodded to the watching Italian, who slammed a hand into his, leapt on him briefly and than cavorted away with a wild cry of triumph.

"It is amazing," said Barshim.

"This is a dream I don't want to wake up from.

"I have been through a lot.

"It's been five years that I have been waiting, with injuries and a lot of setbacks.

"But we are here today sharing this moment and all the sacrifices.

"It's really worth it now in this moment."

Tamberi added: "After my injuries I just wanted to come back, but now I have this gold, it's incredible.

"I dreamed of this so many times.

"I was told in 2016 just before Rio there was a risk I wouldn't be able to compete any more.

"It's been a long journey."

Speaking later on television, Tamberi flourished a section of the plaster that had encased his leg in the aftermath of the career-threatening injury he suffered fewer than three weeks before the Rio 2016 Olympics.

The exuberant Italian, who has the looks and charisma of a rock star - and of course plays in his own band when not training - was heading towards Rio on a high after winning that year’s World Indoor and European Championships and improved his national record to 2.39m at the Monaco Diamond League meeting before pushing on for 2.41m and, on his third attempt, wrecking his left ankle.

He was a melancholy spectator at the Games, his leg in plaster.

But his career has since recovered, and he won the European indoor title in Glasgow in 2019 before taking silver this year in Torun.

Barshim, too, has had to overcome injury in recent years, but recovered sufficiently to win home gold in the Doha 2019 World Championships.

He already knew what victory in this refurbished Olympic Stadium felt like having won the test event held here on May 9 with a leap of 2.30m - his best of the season before the Games.

Barshim - whose best of 2.43m, set in 2014, has been bettered only by the Cuban whose world record of 2.45m has stood since 1993, Javier Sotomayor - was always going to be an immoveable object if he could connect with his best form.

But Tamberi was also supercharged with emotion and determination.

Perhaps the best known example of a major title being shared was the Commonwealth Games of 1982, where England’s Mike McFarlane and Scotland’s 1980 Olympic 100 metres champion Allan Wells shared the 200m gold after both had clocked 20.43sec.

But there is an Olympic precedent, as Olympedia records.

At the 1908 London Games, the men’s pole vault was shared by United States athletes Alfred Gilbert and Ed Cook, who both achieved 3.71 metres, although Cook did so in the qualifying round.

The marathon, in which Dorando Pietri of Italy came so famously close to winning before collapsing several times in the stadium, had a direct effect on the competition.

"The closing stages of the competition were considerably delayed as they coincided with the dramatic happenings at the finish of the marathon.

"Because of the time factor, the officials decided against holding jump-offs for first and third places and, in an unusual decision, two gold and three bronze medals were awarded."