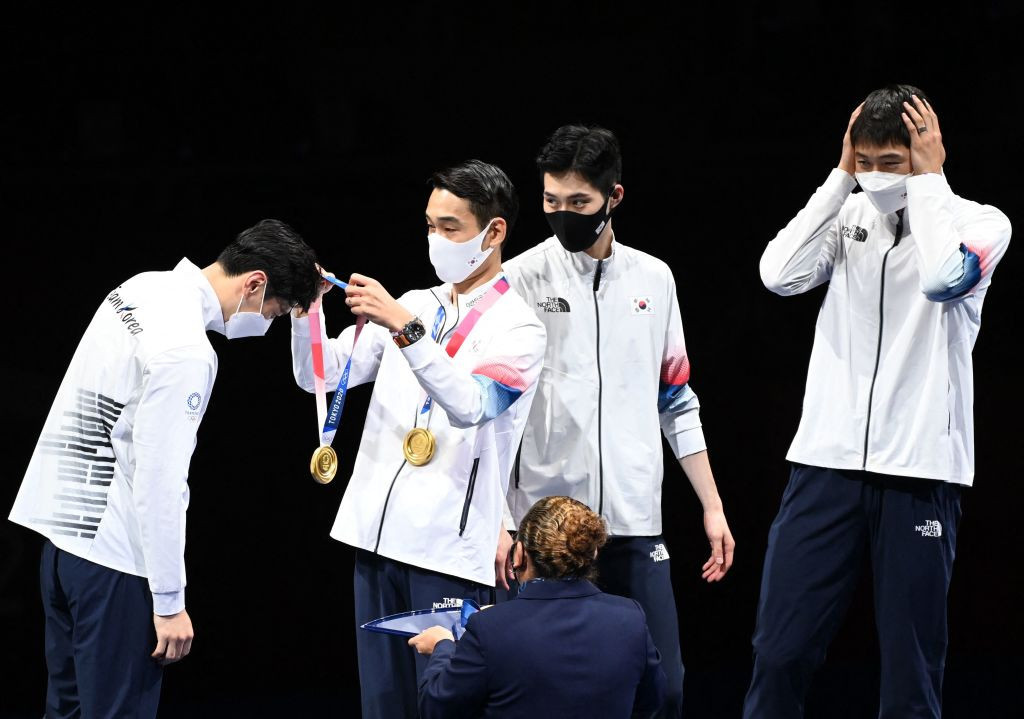 South Korea beat Italy at the Makuhari Messe piste to retain their Olympic fencing title tonight in the men’s team sabre event - nine years after they won it at London 2012.

Tokyo 2020 marks the 25th appearance of the team sabre event at the Games since 1908 - but it wasn’t part of Rio 2016, when team events were rotated off the schedule and only two of the three weapons for each of the men's and women's categories featured.

Oh, who had gained clear water for the Koreans after taking over a 5-4 lead in his first bout against Aldo Montano and passing on a 10-4 lead to colleague Gu Bongil, applied the coup de grace in the final bout after Kim Junghwan, who won the individual bronze in Tokyo, had beaten Enrico Berre 5-1 in the penultimate bout, taking the score to 40-21.

As Oh achieved the touch that brought the score against Luca Curatli to 5-5, and his team’s cumulative score to 45, the golden Olympic celebrations began.

With the score at 25-11 to South Korea after five of the nine scheduled bouts, Berre made a huge effort to reverse the direction of travel as he bested Oh 6-5 in their bout to leave the score at 30-17.

It was a gallant but ultimately unavailing effort.

"Every single game we had today was really hard," said Kim.

"We are really glad we made it to the end and got the gold medal."

Kim and team mate Gu both took part in the London 2012 win.

"When we won in London, we didn't think that we were going to have another chance to be in the Olympics again," Kim said.

"It has been nine years and we have really strong juniors coming into the team.

"We trained them and we got gold.

"I had the pressure that I am the oldest and that I had to lead the team."

Aron Szilagyi, who earned his third individual Olympic sabre title in succession in Tokyo, played a key role in the victory as he earned a 5-1 advantage in his opening round against Richard Huebers, creating a lead that was never lost.

Szilagyi’s 5-4 result against Benedikt Wagner kept the momentum going and the Olympic champion then did enough against a rampant Max Hartung in the final contest to secure a place on the podium.

Hartung, however, singlehandedly dragged the German score back from 26 to 40 before Szilagyi earned the crucial 45th point.

"Amazing," said Szilagyi. "We came here to Tokyo as a team. We did our preparation together. We went to a lot of training camps.

"We reached our target to receive an Olympic medal together. It being the bronze medal, now it’s just like we won it.

"Of course it would have been much better to fence the final, but today the Italian team was very strong."

Speaking of his dramatic final bout with Hartung, he added: "At the end, I got emotionally overwhelmed and I couldn’t have been focused enough.

"My opponent was in his best shape.

"He was strong, aggressive.

"I couldn’t have done anything with his attacks today.

"I got some lucky touches and with the lead we got through the others I was able to finish the match.

"Today he fenced very much better than me but it’s a team competition so together we are very happy I was able to finish the match."