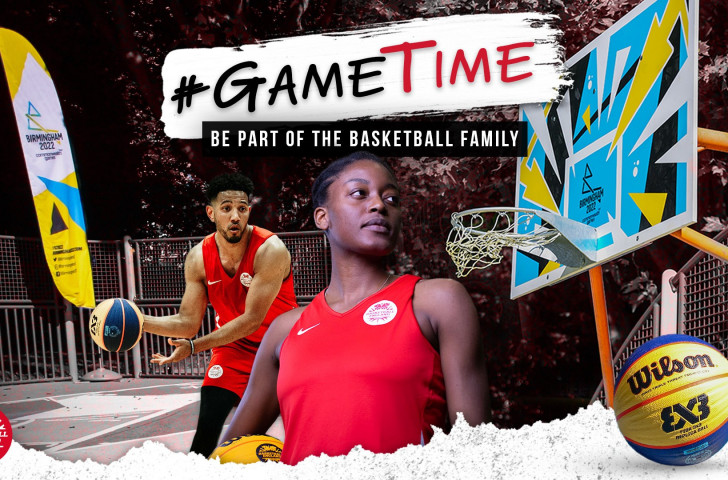 Basketball England has launched #GameTime, a new campaign to boost the popularity of 3x3 basketball as the sport prepares to make its debut in the Commonwealth Games next year.

With a year to go until the Games, the governing body aim to tackle inequalities, stimulate growth and build support for the sport with the initiative.

Basketball England is determined to encourage more people to get involved in the sport through playing and coaching through the campaign which will promote the relatively new discipline of the sport making its Olympic debut at Tokyo 2020.

Wheelchair 3x3 basketball will also feature on the Birmingham 2022 programme with both events due to take place at Smithfield, previously the site of the city's wholesale meat markets.

#GameTime will promote and enable the improvement of outdoor courts in local communities through #ProjectSwish, which has distributed 4,943 free nets for more than 2,200 courts across the United Kingdom.

A special celebration in Birmingham's Centenary Square is taking place today to mark one year until the city hosts the Commonwealth Games.

Basketball England are hosting a 3x3 pop-up court at the event where demonstrations of the sport will take place.

There will be appearances from elite players as well as games and prizes on offer for the public throughout the day.

"We are building optimism as we return to play and prepare for the Commonwealth Games," said Stewart Kellett, chief executive of Basketball England.

"3x3 basketball is an evolution of the game and one of the most accessible sports in the world; it can be played by anyone, at any age or ability.

"As we launch #GameTime we aim to enable even more opportunities for organisations and people across the whole game.

"We encourage everyone go to the Basketball England website and get involved because basketball truly has the power to change lives."

The traditional 5x5 form of basketball made its Commonwealth Games debut at Melbourne 2006 and was included again when Australia next hosted the event, at Gold Coast in 2018.

Australia won the men and women's gold medals in each tournament.

England's best performance was in 2006 where the team won a bronze medal.

The 3x3 event is likely to be more open at Birmingham 2022 due to its developing nature.

There was no team eligible for the Commonwealth Games that qualified for Tokyo 2020.