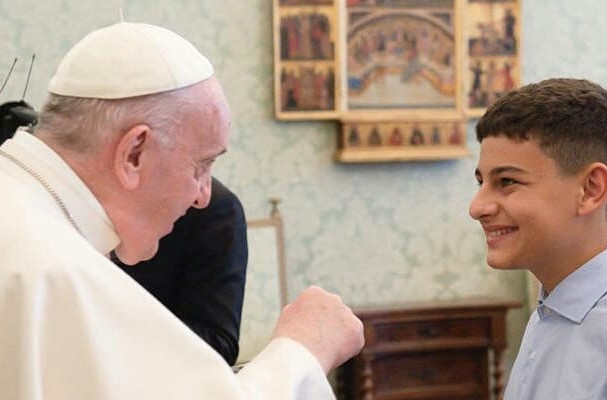 The Global Association of Mixed Martial Arts (GAMMA) was recently met by Pope Francis, who held a private audience at the Vatican City, to recognise the important work it is doing for the local population.

Father Rosario Lo Bello of the Saint Paul the Apostle Parish in Syracuse was invited to meet the Pope on June 11 alongside Gianmaria Leonardi from GAMMA Italy.

Leonardi has worked with the association for 15 years to provide aid to disadvantaged children.

He has organised several free combat sports events and offered free training sessions to underprivileged athletes in the area.

Pope Francis heard from Father Rosario and his students about the activities they have carried out for the community.

These include the creation of a makeshift call centre for people suffering from loneliness during the COVID-19 pandemic.

During the audience with Pope Francis, it was explained how combat sports have had a significant positive impact on the young people of Syracuse, acting as a gateway for many teenagers to enter the gym and find religion.

Leonardi’s son, Matteo, presented the Pope with a pair of fighting gloves as a symbol of the activity the sport has carried out in the community over the years.

Pope Francis was said to be delighted to receive the gift and thanked Matteo with words of affection.

"For us, it is a way of life, built on the foundations of our values, which include respect for others, empowerment, and service above self."

"As a socially conscious organisation, we at GAMMA applaud the efforts of Leonardi in helping those in need in Syracuse and look forward to similar initiatives being implemented elsewhere by our GAMMA community around the world."

GAMMA is best known for its international mixed martial arts events, but its daily work reaches beyond the ring into communities in an effort to create a better future for all.